Young people from rural areas do not have access to local and regional media. Insufficiently strengthened awareness of media literacy and poorly developed youth activism is also noted. Young people are neither motivated nor interested in getting involved in any local actions where they would include media promotion. This was emphasized at the panel discussion “Experiences from non-formal education of young people for media literacy and critical thinking” which was held within the 17th edition of the international conference “e-Society.mk”.

Young people show little activity in the civil sector, because they expect to get something in return, and in fact, they should be the ones who give to the community and society, said Žaklina Cvetkovska from the Center for Audio and Audio-Visual Media Arts in Kriva Palanka.

This is the conclusion of the project “Media literacy for critical youth attitude” which was implemented in the municipalities of Kriva Palanka, Kratovo and Rankovce, and which involved 80 students in the ninth grade. These are municipalities that are one of the most neglected and least developed, municipalities with limited opportunities for young people because young people there do not have access to local and regional media, especially informative media that would promote youth policies and problems, says Cvetkovska.

“The project indicated low self-confidence for public performance among students, which is why I think that one of the main challenges that educational institutions must work on is to strengthen the self-confidence of primary school students, in order for them to be able to express themselves publicly. This is especially true for small areas, where young people feel inferior to large urban areas and believe that they are insufficiently prepared to face their peers,” said Cvetkovska.

“Media literacy permeates all spheres of social life and is really important for everyone in society, especially for young people who are subject to a lot of propaganda, disinformation and centers of power that can manipulate them,” Cvetkovska said. 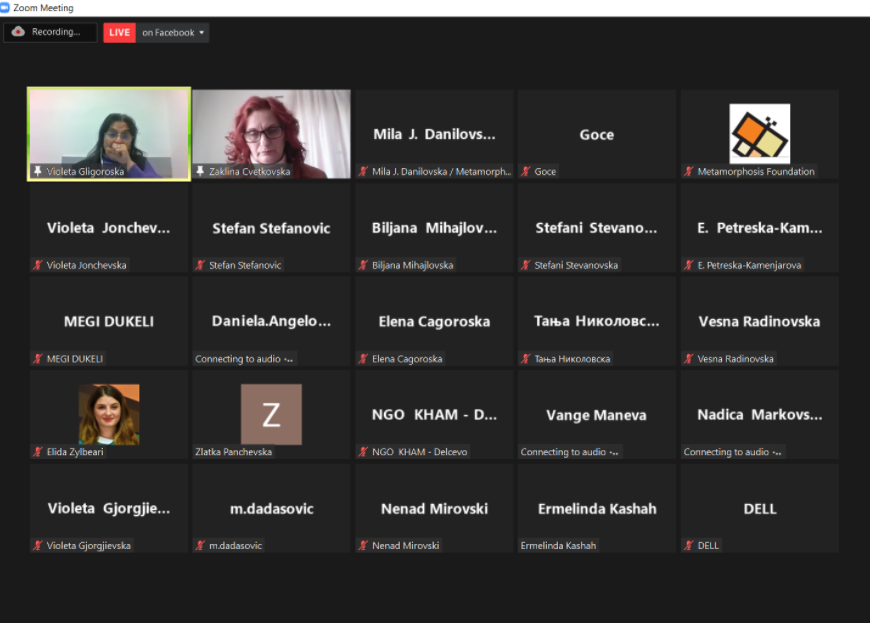 Rural primary school students are most present on Instagram and TickTock

As the biggest challenges for the media literacy of the youth in the rural areas, Cvetkovska pointed out the lack of local and regional media, which is why one must think about how to increase the presence of the media there, and above all the information about local events and youth actions in local environments. According to her, the need for digital education remains, as well as overcoming the uncertainty in public appearance.

“The students had a problem turning on the camera and expressing their views,” Cvetkovska said.

According to the conducted polls, only a small part of the primary school students, i.e. 25 percent, followed informative content, and most of them focused on entertaining content. They were mostly present on Instagram, TickTock and Twitter, where they often viewed and shared photos and videos. It was also noticed that only 10% of the young people were present on the social network Facebook.

Cvetkovska pointed out that their research showed that many young people do not distinguish between a website and a social network, which is devastating. The students from these municipalities did not know to list any daily newspaper or magazine. Only a few knew what censorship, propaganda, public interest and public opinion were. At the same time, only 15 percent knew a news item was being checked by at least two sources.

The elementary school students did not even know what inclusiveness, empathy and the basic rules of good behavior on the Internet were. Nearly 40 percent said they had faced internet dangers, and this was mostly reported to friends and parents, less often to teachers.

The Internet has helped a high 87 percent of ninth-graders in their learning, but mainly through the use of Wikipedia in terms of teaching content.

The project included several activities such as surveys, interactive and educational workshops and online youth actions for digital education. The project aimed to influence the promotion of youth activism and the understanding of the basics of media literacy.

Following the implementation of the project, there was a 29 percent increase in knowledge of media literacy among primary school students.

“As many as 74 students have begun to recognize media literacy in education. In the beginning, they did not know any basic journalistic genre, but then we approached the basic journalistic genres and showed them how to prepare a text, information, but also how to make a selection of news. We have achieved a great result in the field of digital literacy. After the education, the primary school students knew what propaganda, censorship, public interest was and they increased by 45% the knowledge from how many sources a news item should be confirmed,” Cvetkovska said.

Institutions to include Media Literacy in education

Violeta Gligoroska, program coordinator at the Metamorphosis Foundation, said that the results and conclusions of these researches should be recognized by the institutions, and the promoted educational tools should become part of the teaching aids in promoting the subject of Media Literacy in formal education.

“The Bureau for Development of Education did not recognize the possibility to use and take into account the materials from the Center from Kriva Palanka and distribute them to schools to be used as teaching aids and as a possible tool for further education. Not only for these young high school and primary school students who were educated informally but this could also be shared at the level of inter-municipal cooperation throughout the country,” said Gligoroska.

She added that there was an unprecedented interest in the materials for media literacy that were produced by the grantees within the project “Critical thinking for mediawise citizens – CriThink”.

“We are aware that media literacy must not, should not and is not just one subject. It is a multidisciplinary field that requires the involvement of many stakeholders by state institutions, civil society and media experts, in order to achieve a comprehensive and multidisciplinary approach to young people, primary and secondary school students in what direction and how to improve the media sector, and thus media education in primary and secondary schools,” – said Gligoroska.