“Investigative article: We do not need proof of citizenship, we have an ID card, electronic services can remove many documents from use (III)“ – Portalb.mk

The electronic services in RNM would remove some documents from use, which should not exist, to be withdrawn from use, because they only increase the costs of the citizens and are a waste of time when applying and waiting to receive it.

“The idea for digitalization of the registers in the institutions is to remove from use some documents, for them to exchange data with each other, and for us citizens not to need to take that data as documents. If the registers for receiving state benefits or other benefits are digitized, when an institution needs information and will need to check whether you are a beneficiary, it will contact the institution that has this information and will receive a response, and you will not need the document as evidence. “- says Iskra Belčeva, from the Center for Change Management.

She adds that by doing this, the citizens will not even have the obligation to obtain a series of documents, to spend money and time, and the procedure will be shortened for the institutions as well, there will be no unnecessary steps, the employees will not be involved, i.e. the risk of corruption and abuse will be reduced.

University professor Borče Davitkovski also believes that some documents should be removed from use, i.e. should be digitized.

“They harass students while enrolling, asking them to provide a document about which they already have information. The Office for Management of Registers of Births, Marriages and Deaths should enable online services that will stop the citizens from going to their offices, for example, if someone wants to get a birth certificate, death certificate, etc. they do not have to wait at the counters. Everywhere in the world, these documents are delivered electronically, but in our country, everything is bureaucratized and those e-services are unfortunately offered rarely,” said university professor Davitkovski.

The professor takes the example of building a house, for which you need to get a bunch of documents, from the cadastre, the plans, water supply, electricity, telephone and everything else. According to the professor, all over the world, this is done electronically – you just give the address and ID number and from the records, they will automatically see that you are the owner, that you have the permit to build there and that is simple. We wait 1 year to get a building permit, which can be done in 30 days. “We continue to have a stamp and a signature, while everywhere else in the world multinational companies sign contracts worth billions and there is neither a stamp nor a signature. Businesses are moving forward, while we are still looking for a stamp and signature for citizenship, which is crazy, when in fact our ID card is proof that we have citizenship,” said Davitkovski.

“There are examples when citizens submitted an application electronically and asked for the document to be delivered to their home address, paid for it and did not receive the necessary documentation for months, on which the realization of some of their rights depends. Or, they have applied electronically to the office of the institution, and then they were sent to pick up the documents elsewhere – in a regional unit of the same institution. The general impression is that for the citizens, the cooperation between the state bodies is not visible, the capacity of the staff working in those counters is not at an appropriate level, although it is understandable that one official cannot know all areas of social life, because the problems that need solving and the services provided are of different types” said Tinka Kitevska from “Fair and Professional”.

According to Professor Ana Pavlovska-Daneva there are legal barriers in certain segments.

“First of all, there are legal barriers in certain segments (for example, we still have laws that require the submission of an original document and the services automatically interpret it as a physical solution in paper form, so that such a document in scanned format is often not taken into account in administrative procedures, even when they are electronic), there is still a lack of information technology and equipment in many public institutions and finally we have a shortage of professional and trained staff. The difficulty for the proper functioning of the e-government, i.e. the provision of electronic services for citizens and businesses is the lack of full interoperability between the state administration bodies, so that they cannot even communicate electronically with each other and send electronic data and documents from their databases and registers, let alone communicate electronically with all persons and stakeholders and thus prepare decisions, administrative acts, actual acts, documents, etc. – says the professor.

According to Pavlovska-Daneva, this whole situation is complicated by the fact that different donors offer their assistance to different bodies and organizations without any order or rules in this area, without set priorities, etc., so that there is an overlap of different projects, from the beginning, there is non-completion of projects or there are also situations where certain bodies never accept assistance, while others have two or three projects (assets and equipment) for the same competencies, for the same work from different donors.

(continues tomorrow: “Aspects to pay close attention to: security and privacy of electronic services in RNM”)

‘This Investigative article was produced as part of the project Increasing Civic Engagement in the Digital Agenda – ICEDA, co-funded by the European Union and implemented by the Metamorphosis Foundation (North Macedonia), the Academy of e-Governance (Estonia), Levizja Mjaft! (Albania), CRTA – Center for Research, Transparency and Accountability (Serbia), NGO 35mm (Montenegro) and ODK – Open Data Kosovo (Kosovo). The project is being implemented with financial support from the European Union. 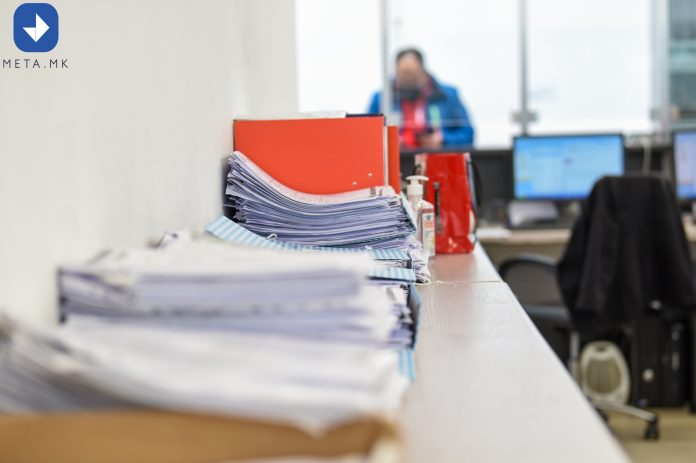