Online debate “How well do the media meet the information needs of young people?” 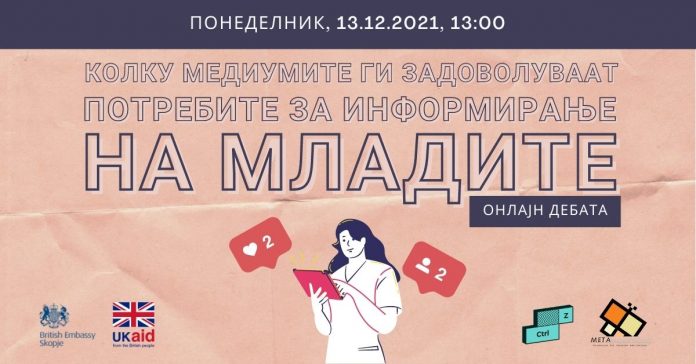 Whether young people trust the media, how often they are informed by domestic media and whether engaging in socially important issues is a waste of time, are some of the questions that participants in the online debate “How well do the media meet the information needs of young people ” which will be held on Monday (13 December), starting at 1 pm on the Zoom platform.

The public debate is organized by the Metamorphosis Foundation, within the project “Credible News for Empowered Youth”, funded by the Embassy of the United Kingdom in Skopje.

Representatives of the public service MRTV, the news agency “Meta.mk”, “Portalb.mk”, Radio MOF, as well as representatives of the National Youth Council of Macedonia (NYCM) and the University Student Assembly of UKIM (USS UKIM) will take part in the debate. They will talk about the information habits of young people and will raise the question of whether the media offer content that can keep the attention of young people.

The event is part of the Media Literacy Days and will be opened by the Ambassador of the United Kingdom in North Macedonia, Rachel Galloway.

The online debate can be followed via Zoom at the following link, and more information on the event can be found here.