The Metamorphosis Foundation in cooperation with four partnering civic organisations will present four web applications based on open data on Tuesday, March 1. The projects consist of a system for public procurement research, web application providing information on the services of catering establishments in Macedonia, information on direct payments in the agricultural sector via IPARD and database of judiciary monitoring reports from the past decade.

The web applications were created by IKT za promeni (IT for Change), All for Fair Trials Coalition, the ZIP Institute and IRRZA. Their ideas won the Call for Support of Open Data Projects, part of the Civic Organisations for Open Data Network project implemented by Metamorphosis in partnership with Open Knowledge, supported by the British Embassy in Skopje.

His Excellency Charles Edmund Garrett, British Ambassador to Macedonia, will address the attending.

Twelve civic organisations competed with their project ideas, four of which were selected for financial support: IKT za promeni (IT for Change), All for Fair Trials Coalition, ZIP Institute and IRRZA.

Tetovo-based IT for Change created a web-app called OpenProcurement or System for Public Procurement Research. They collect, organise and present the publically available data from the electronic public procurement system in manner accessible to Macedonian journalists, as well as anybody with an interest in tracking public procurements.

IRRZA, or the Institute for Rural Community Development from Skopje, developed the project idea Real Rural Community and Agriculture Development. They collect, analyse and present data from the National Programme for IPARD Projects in Macedonia in a manner accessible to the wider public.

The ZIP Institute from Skopje created a web-app called Rate.me – Reporting System for the Services of Catering Establishments, the aim of which is to gather positive and negative practices from Macedonian catering establishments serving food and drinks. They gather data on licences, categories (e.g., night club, bar, disco club) and aim to include data on fines paid by and reported incidents in the establishments.

The civic organisations coalition All for Fair Trials developed a project for a transparent judiciary system based on open data. They digitalised and opened their database of judiciary monitoring reports collected over the past decade. 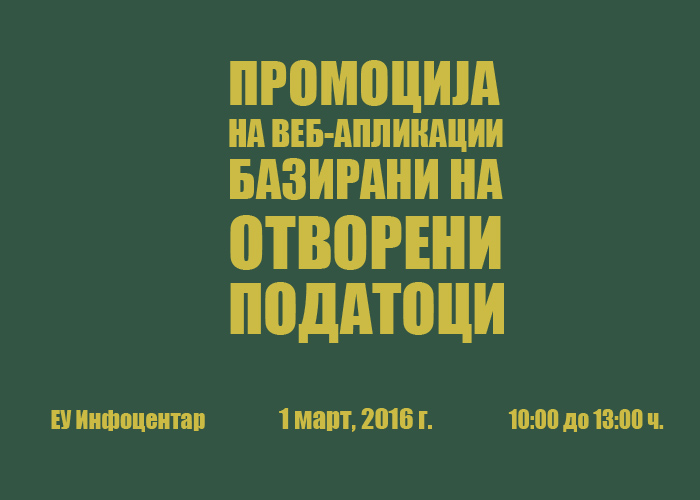 Representatives of Macedonian civil organizations, journalists and the general public, starting from today can easily and simply analyze the electronic public procurements via the new web app openprocurement.mk. This is only one of…