Metamorphosis Foundation for Internet and Society and Center for European Strategies – Eurothink, today held the kick-off meeting for The Critical Thinking for Mediawise Citizens – CriThink project, which will be implemented in the next 3 years, with the support of the European Union. By presenting the project, the meeting seeks to spur cooperation in the field of development of critical thinking and media literacy for the sake of openness and cooperation between all stakeholders. In addition, the project team presented project’s basic elements before the public and announced the first call for small grants.

The overall objective of the action is to promote media literacy, Metamorphosis’ Program Director Filip Stojanovski said, which serves as basis for safeguarding the right of citizens to hold diverse opinions, via stimulating a culture of critical thinking, pluralism of opinion and democratic values. Specific objectives of the project are:

• To foster a culture of critical thinking via education of the general public on the detrimental impact of media manipulations on democracy and European values.

• To increase citizen demand for accountable media through public education, promotion of professional standards and international practices that protect freedom of opinion and expression.

In his address, Goran Lazarov, the project coordinator from Eurothink, explained that 16 small grants in the amount of 5000-7000 euros per grant will be awarded within the small grant scheme. Moreover, the re-granting program will have two cycles. The first one starts today, 1 June, until 31 March 2019. Eight grants will be awarded within this cycle, which will support one project in each of the eight planning regions of the Republic of Macedonia. The total amount of the first cycle is 50.000 euros, i.e. 5000-7000 euros per grant as I mentioned. The second cycle, which will be implemented from 1 June 2019 to 31 March 2020, is in the same amount.

“I would like to explain the call we are promoting today a bit more thoroughly. Applicants can only be local civil society organizations working on basic, grassroots level. This call has no limitations as to which civil society organizations can apply regardless of their founding date and mission, as long as the project ideas overlap with our project’s objectives – promotion of media literacy. What makes this call slightly different than the others, which is also in line with project’s objectives, is that every civil society organization, without exceptions, will have to work in partnership with media (local or national), and cooperation with educational and other institutions as well as relevant stakeholders would be considered an asset.” – Lazarov said.

Application deadline is 6 July 2018, 17:00. Apply only by using the application form available at http://crithink.mk. Projects’ implementation will begin in September 2018, and it must not last more than 6 (months), meaning projects must end by the end of February 2019.

Important: the list is non-exhaustive, there’s a possibility for supporting other activities, if considered to be in line with project’s objectives:

The small grant scheme methodology has been designed to serve as a process of learning and upgrading of the grant awardees. During the entire implementation process, the project team will provide the selected grantees with any type of support.

In this regard, at the beginning of each sub-granting cycle, the project team will gather additional information from the grantees about the context within each region as well as the organizations’ capacities and planned project activities. At the beginning of their projects, the grantees will attend a three-day training that will help them implement the grants, which will result with creation of detailed work plans for each of them.

Moreover, the grantees will participate in three webinars that will answer their most important questions at the particular moment.

Additionally, the project team will provide the grantees with mentorship regarding administrative and financial operation of the project. In the upcoming period, info sessions will be held in each of the planning regions:

Skopje, 7 June at the Agency for Audio and Audiovisual Media Services

Additional info days will be organized if needed.

Potential applicants can ask for additional clarifications or additional information about the call. The questions have to be e-mailed at contact@crithink.mk, not later than 22 June 2018, 17:00, so answers can be provided opportunely, before the deadline.

Further details regarding the call are available here.

Live stream of the event is available here. 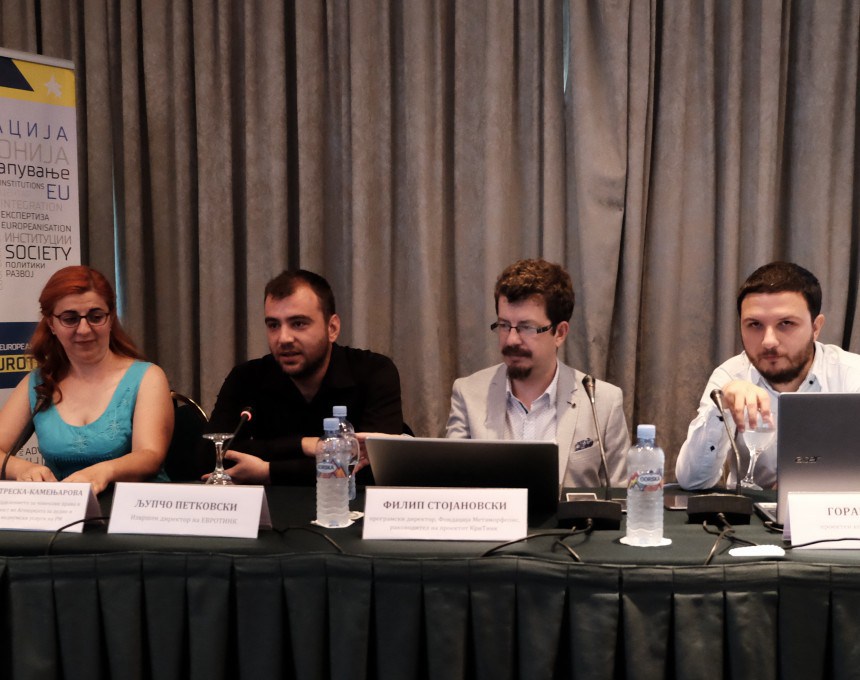