“Investigative Article: Citizens wander through the counters, N. Macedonia is 10 years behind Europe in the field of digitalization (I)” – Portalb.mk

Citizens of North Macedonia can hardly obtain documents “with just one click” on the Internet. This is because the state provides limited electronic services, the potential of the e-portal is not fully used, and citizens, although they have the equipment, do not have enough information about electronic services. According to the research conducted by “Portalb.mk”, it appears that there is not even data on how many citizens used these services, compared to traditional services – obtaining documents by physical presence. If RNM were to be digitized as the countries of the European Union, of which it intends to become a member, then some documents, which should not exist, will be withdrawn from use, because they increase the costs of citizens and are a waste of time to apply and wait for obtaining them.

We meet the standards that were valid in 2010

North Macedonia lags behind the countries in the region and Europe in terms of implementing electronic services and raising them to a higher level.

“Research shows that Macedonia in 2020 is below the level reached by European Union member states during the year 2010. This also shows that we are very late in providing electronic services and raising them to a higher level,” Marjan Gušev, professor at the Faculty of Computer Sciences and Engineering in Skopje, told Portalb.mk.

Meanwhile, other countries are developing rapidly in this direction.

“The study shows that the latest estimate of the sophistication of online services for e-government in North Macedonia is 77 percent and 62 percent, and they are fully available according to the 2010 standard. The performance of e-government services in North Macedonia is lower than the EU average achieved in 2010, as well as the result of the 2020 standards. Although compared to the achievements of the past years, the sophistication and full availability of e-services show significant improvements, the gap with other EU countries is still growing over time. This analysis shows that RNM will reach the European standard with a delay of 11 years. Our analysis shows exponential growth in the online sophistication of e-services, but other EU countries have the same growth. In conclusion, gap and difference are increasing exponentially. The delayed start and the slow progress will have to be solved through more coordinated activities to reach the last steps of the EU countries “, is the conclusion of the scientific paper of the university professors Marjan Gušev, Izabela Akimoska and Anita Antikj. In the Law on General Administrative Procedure, many Articles emphasize the obligation of state bodies to provide electronic services to citizens.

“Portalb.mk”, for illustration, listed only 3 Articles where the institutions are obliged to act electronically.

The Ministry of Information Society and Administration (MISA), which is in charge of the process of digitalization of electronic services, says that in this term they have some priorities that need to be moved forward, for citizens to lose as little time as possible for obtaining services from many ministries, public institutions, schools, kindergartens, etc.

“Our ministry has just received a grant from the European Union pre-accession funds, according to which we will develop over 130 electronic services within this government mandate. Although we are now in the phase of identifying these services, the criterion for selecting the services will be the degree of use of them, insisting that the services where citizens and businesses wait in long lines and waste time be subject to digital transformation. This will directly affect the fight against corruption – elimination of the human factor for obtaining service,” told Shpetim Latifi, advisor to the Minister of Information Society and Administration.

There is neither a unified database with all data on electronic services, nor it is known how much they are used

North Macedonia does not have a unified database with official data related to the provision of electronic services. It is not known how many citizens have used these services, compared to traditional services – with a physical presence. Therefore, we turned to some of the institutions that provide services and according to the information we received, it can be said that the citizens still, to a large extent, go to the counters.

“Portalb.mk” addressed MISA, but they told us that they do not possess such data.

The Ministry of Justice, i.e. the Registry Office has created the Electronic Registry through which citizens can apply for the services of this institution. To apply for documents, the citizen needs to create their account with a password. This portal also offers online payment.

We asked for statistics on how many citizens used their services electronically, and how many with a physical presence, but they told us that they do not have such data. They offered us only several electronic requests issued by the National Portal for e-Services. According to the data, from 1 January 2019 to 10 September 2020, through the e-Services Portal, about 27,764 requests were submitted to this ministry. The portal currently has 26,129 registered users.

The Ministry of Labor and Social Policy, which provides a range of services to citizens, does not have statistics on how many citizens from the sectors under the jurisdiction of this Ministry received documents in electronic form, and how many did so by being physically present at the counters.

Unofficially, sources from the Ministry say that the majority of citizens obtain the documents with a physical presence and a very small number in electronic form. In the absence of these data, the MLSP provided us with data on the exercising of citizens’ right to free access to public information. These data show that citizens prefer to use the form with a physical presence.

“During 2019, for the service for free access to public information, a total of 112 requests were received, of which 107 in paper form and 5 in electronic form. In 2020 (until September), 27 citizens submitted a request in written form, and 13 in electronic form “- the MLSP informs.

The data of the Ministry of Interior regarding the appointment of dates for the issuance of personal documents show that the citizens remain faithful to the old procedure, even though in 2020 there is an increase in users of the electronic platform, compared to 2019, when this platform experienced a setback.

In contrast, according to the data of the Central Registry for the request to have an insight into the current situation of the entities, the electronic service was used more.

In the Report for 2019 on the work of ZELS, it is said that there is a Unit for support of electronic services for the municipalities (ZEPE), which enables accelerated realization of one of the strategic priority goals of ZELS to support its members in creating “e-municipalities”.

As stated in the report, there are 7 platforms for electronic services at the municipal level, but we checked and found that most of them are not functional.

“Through the information system http://www.gradeznadozvola.mk, the municipalities in 2019 issued 2,109 building permits, while through the information system for public electronic bidding for conducting the procedure for sale and leasing of real estate and movable property http://www.estvari.mk, municipalities had about 100 “announcements for auctions” – the report says.

According to the ICEDA Report, a Metamorphosis project related to the current state and advancement of the digital agenda in North Macedonia, there are also positive examples where electronic services have been successfully used.

“Despite all the challenges, the experiences with the reforms to facilitate citizens’ access to electronic services in North Macedonia are encouraging,” the report said.

A positive example is the operation of the Internet portal “MojTermin” led by the Ministry of Health in direct cooperation with health institutions from all segments of health care, with the main goal to establish automatic work processes in coordination with all levels of health care, health administration and pharmacies. Health services have recently been enriched by the introduction of an “e-prescription” service for chronic therapy for the sick, which was launched after the pandemic.

Other positive examples are the “electronic toll collection system” which was assessed as successful with the sale of over 12,000 electronic payment devices in two months, but also the “e-Tax” system that simplified tax reporting, which was previously practiced only on paper. As an upgrade of this system, the application “MojDDV- (My VAT)” was created, which enables VAT refund for individual taxpayers. The application has over 100,000 downloads and according to government estimates has reduced the level of tax evasion and brought additional revenue to the budget.

“Portalb.mk” talked to representatives of the Public Revenue Office, one of the institutions that offer several services online.

“PRO, in addition to providing almost all services to citizens in electronic form and due to this it is not necessary to come physically to the premises of the PRO, through the tax offices gives instructions to all citizens who do not know how to use electronic services,” – said Mihajlo Mihajlov from PRO for “Portalb.mk”.

According to them, most often the tax offices are visited by citizens who do not know how to submit/attach documents through the electronic system for e-taxes, advance payments for rental income, confirmation of the Annual tax return, filling in the pre-contact calculation for income on any basis and the like.

(continues tomorrow: RNM portal for electronic services is semi-functional, citizens possess the equipment, but do not receive information)

This Investigative article was produced as part of the project Increasing Civic Engagement in the Digital Agenda – ICEDA, co-funded by the European Union and implemented by the Metamorphosis Foundation (North Macedonia), the Academy of e-Governance (Estonia), Levizja Mjaft! (Albania), CRTA – Center for Research, Transparency and Accountability (Serbia), NGO 35mm (Montenegro) and ODK – Open Data Kosovo (Kosovo). The project is being implemented with financial support from the European Union. 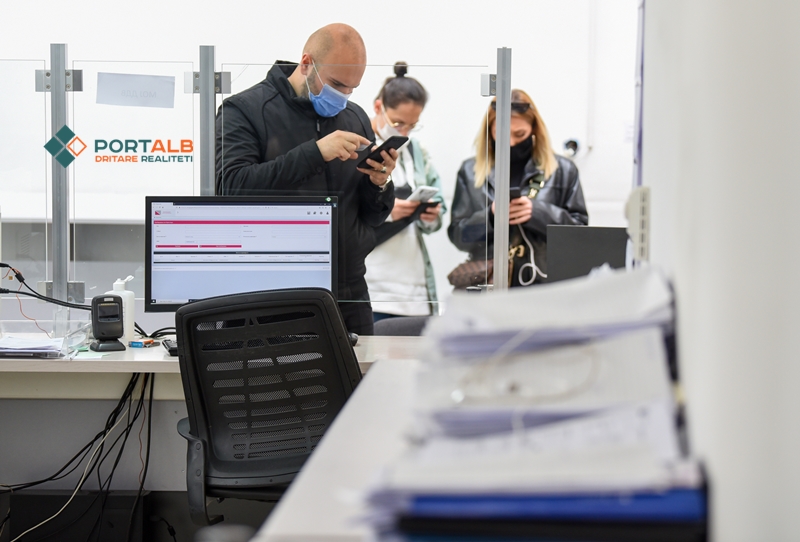