The 16th edition of the e-Society.mk conference on the topic Engagement and Effectiveness: Good Governance and the Internet took place between 25-26 November in 2020. The conference was organized online for the first time due to the COVID-19 pandemic. It was also livestreamed on Facebook and allowed a broad participation at the event. The 16th edition of the e-Society conference aimed to promote an open culture in all spheres of life and governance by relating it to digitalization as an inherent element of openness. It was attended by a total of 132 participants from 18 different countries, which added to the international character of the conference,

The opening session presented some inspiring stories and recommendations that set the tone and provoked the discussion that followed in the rest of the sessions. The Minister of Information Society and Administration, Jeton Shaqiri, opened the conference by highlighting the commitment of the government toward further digitalization, hand in hand with improving the digital skills of the broad population – given that around 90% of the job openings in 2020 required some degree of digital skills. Kristina Rainslau from e-Governance Academy emphasized the need to start working toward digitalization immediately, with small steps but a clear vision of the goal, providing examples from Estonia’s case that enabled its broad digitalization. Chris Worman from Techsoup Europe emphasized the role of the civil society toward empowering people and supporting them to actively use the necessary tools to responsibly and effectively participate in the ever-growing digitalization. However, as Chris emphasized, the availability of the internet, software and hardware in itself is not sufficient to ensure full digitalization: the process needs to be supported by the consistent development of skills and the necessary policy to ensure security and massive use. 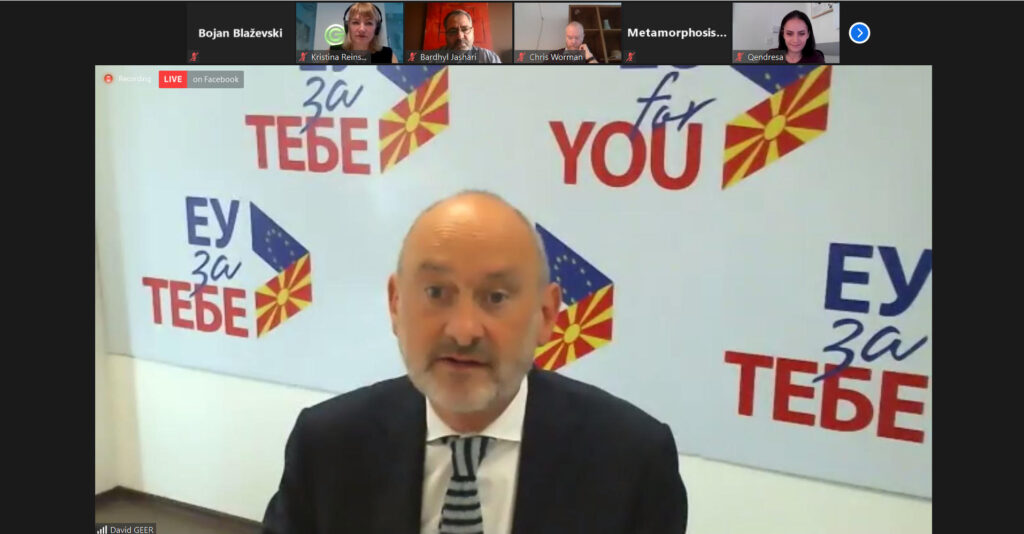 David Geer, the Head of the EU Delegation in Skopje, emphasized the importance of digitalization in the European Union and the support that it provides to North Macedonia to develop the necessary infrastructure to ensure a safe and effective digitalization. Ambassador Geer also emphasized the risk that come with technology, as is the massive dissemination of disinformation, which requires consistent media literacy and digital literacy education.

Bardhyl Jashari, Executive Director at Metamorphosis Foundation, who moderated the opening sessions noted that this year, unfortunately due to the pandemic, the name of the conference e-Society becomes even more meaningful as almost all aspects of our lives are taking place online from work, trainings, distant learning and much more. He emphasized that none of us want an e-society that is imposed on us due to unfortunate circumstances, rather we want an e-Society that we feel comfortable in, in which we use technology competently and with responsibility, and called on all actors to work together toward accelerating the work toward digitalization.

The next session focused on The Key to Good Governance – Open Processes and Data and was moderated by Marjia Nikolovska Arsovska, who hosted a panel of distinguished speakers. Rudi Borman from OGP Local, Kristina Jovanova from the OSCE Mission to Skopje, Gordana Gapic – Dimitrovska from the Ministry of Information Society and Administration and Blerina Ramaj from Open Data Kosovo spoke about their experiences, insights and recommendations about why and how the implementation of open processes and publishing open data should become a priority for the public institutions at the central and local level. The general conclusion of this session was that engaging citizens in decision-making is the core of democracy and this can be successfully achieved through greater access to information, open data, technology, and participatory practice from the public institutions.

It was said that public institutions today should continuously build new ways to share information with citizens, to find new opportunities for dialogue and to make services easier to access. The speakers noted the benefits of opening public sector data which will contribute towards greater transparency, government efficiency, delivery of better services to the citizens, greater citizen participation and economic growth. In this regard it was concluded that it is very important to not just encourage the public institutions to publish open data, but also to identify and educate the users of these data so that they are able to use that data, while forming whole communities of users who will collaborate on the basis of this data.

The session on Localization of the Digital Agenda in the Western Balkans, hosted by Mila Josifovska Danilovska, gathered five speakers representing the institutions, the business sector and an international organization from the countries of the Western Balkans: Muhedin Nushi and Gresa Deda from the Municipality of Prishtina, Slobodan Markovic from UNDP Serbia, Boris Radovic from Business Integration & Business Intelligence in Montenegro and Igor Kuzevski from Personal Data Protection Agency of North Macedonia.

Check out the videos from the Conference:

Day 1 – The key to good governance – open processes and data

Day 1 – Localization of the Digital Agenda in the Western Balkans

Day 2 – The Role of Watchdog Journalism Toward Good Governance

The speakers emphasized the importance of good governance and the role of the digital transformation in promoting democracy and empowering the citizens. Special emphasis was given to the good practices of e-services in the region, namely the digital machine “e-kiosk” that the citizens of Pristina have been using for three years for quick and easy retrieval of five types of documents; as well as the “digital kiosk” as a mobile application for payment of certain services in a fast, easy and secure way, used by approximately 20,000 citizens and tourists in Montenegro. Nevertheless, the general conclusion for an effective and sustainable digital transformation in the region was the need for political support in the countries and securing the right to privacy and protection of personal data, which to this day remain as challenges in the region.

The second day of the conference was started with a session on the Role of Watchdog Journalism Toward Good Governance, which was moderated by Goran Rizaov, who hosted a panel of four speakers: Dr. Bill Silcock from the Arizona State Uniersity, Dr Nikos S. Panagiotou from the Aristotle University of Thessaloniki, Filip Stojanovski from the Metamorphosis Foundation and Filip Nobel from Global Voices. 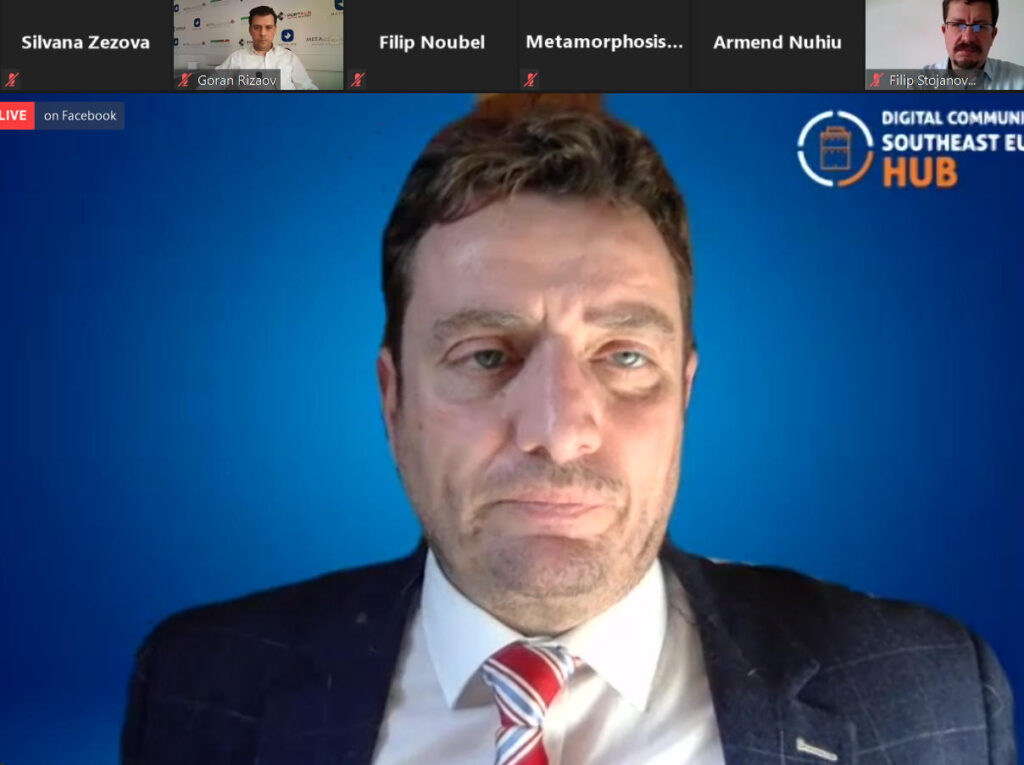 A recurring conclusion in all the presentations during this session was that the audience has lost trust in journalism and is in turn seeking alternative channels to inform itself – which opens the path to manipulation, the dissemination and consumption of fake news. To regain its watchdog role journalism, i.e. journalists, need to rebuild public trust through transparency, accountability and an emphasis on the importance of ethics in their work. The unsustainable business model of relying on ads and the demand for fast information are challenging media to undergo drastic changes that affect the relationship they build with their audience. In turn, media need to innovate to emphasize that the role of journalism is not only to be first rather to be accurate and credible; not only to describe information rather to give meaning to them.

The speakers brought the education process closer to the audience with a particular emphasis on digital learning that began with the COVID 19 pandemic in North Macedonia. Emphasis was put on the main challenges that the teachers, school management, parents and students as final beneficiaries, face in the educational process. The overall conclusion of the panelists was that the digital tools have become the main tool in the education process, however, it is imperative to provide equal opportunities for all. Unfortunately, not all schools were able to adapt sufficiently in the online education process, often at the expense of the quality of the education that students receive. 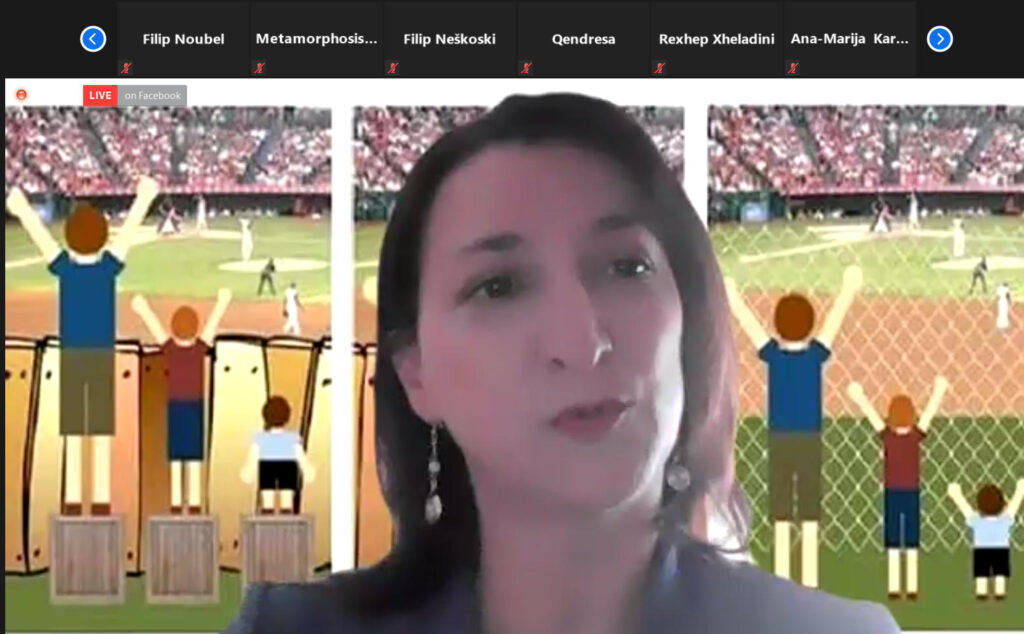 The conference was concluded with a workshop on Key Challenges in Digitalization of Education in North Macedonia. The workshop targeted all the stakeholders in the process and its aim was to identify the biggest risks to security and privacy in digital education. Workshop consisted of general discussion about the actors in the digital education and what are the usual threats that are facing on daily basis. This led to the use of an interactive tool Mentimeter which participants used to map and prioritize the risks. Biggest risks were identified in the use of biometric data and cyberbullying. The workshop was attended by around 50 participants.