On 30 October 2020 at 11:00 AM, the Metamorphosis Foundation for Internet and Society, held the online event Dialogues for the Digital Agenda within the project Increasing Civic Engagement in the Digital Agenda – ICEDA. The event was streaming live on Facebook and it can be found here.

The event was attended by 77 representatives of the civil society, institutions, media and citizens, and it consisted of a brief presentation of the project and the ICEDA Network, the Digital Agenda for the Western Balkans and the presentation of the research conducted within the North Macedonia Digital Agenda Observatory which the Metamorphosis Foundation implemented as part of this project. Furthermore, the event served for inciting a discussion on the benefits and challenges of implementing the Digital Agenda in North Macedonia in today’s context, which resulted in key conclusions that stakeholders should take into account in implementing their further activities. 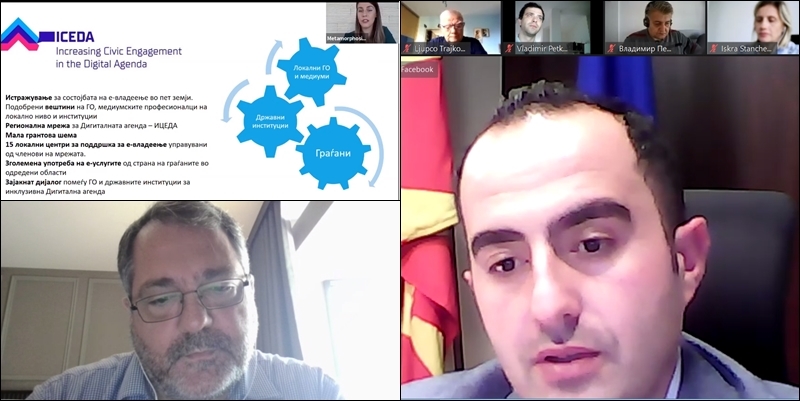 “If there’s one thing we’ve learned from the pandemic, it’s that the digital world is really important. In order to resolve the financial crisis as soon as possible, digitalization should be financed. It will have a significant impact on improving the situation. Now, we have seen that not investing in it can cost us a lot. Our goal in the coming period is to provide systematic preparatory solutions for general electronic communication within the institutions and between the institutions. By 2021, we aim to enable at least 30 percent of the state administration bodies to have an electronic system for automation of administrative procedures, and by 2024 this system to be implemented in the entire state administration. We also aim to enable the implementation of the agreement signed with Mastercard, for the development of innovative digital certificates of identity confirmation. Let’s continue with the opening of service centers in all cities of North Macedonia, following the example of Skopje,” said Minister Shaqiri.

The Executive Director of the Metamorphosis Foundation said that the conducted research showed that not all segments of society or the population are aware of or feel the benefits of digital technology or digital transformation, not everyone knows how to use it and not everyone has access to it. And in order to achieve this, he concluded that several things are of utmost importance:

The representative of the EU delegation in Skopje, Sanja Frkovic-Gelevska, said that Europe is trying to enable a competitive economy through digitalization while respecting users rights.

“The European Union strives to make a real difference to its citizens on a daily basis by using technology and enable a strong and competitive economy that will improve while respecting European values. Through this, the aim is to ensure a digital economy that will have global competition, and consumers will have confidence that their rights will be safe,” Frkovic said, explaining that under the Stabilization and Association Agreement, North Macedonia is obliged to develop and harmonize its policies and the legal framework in the field of electronic communications and information society with that of the EU. 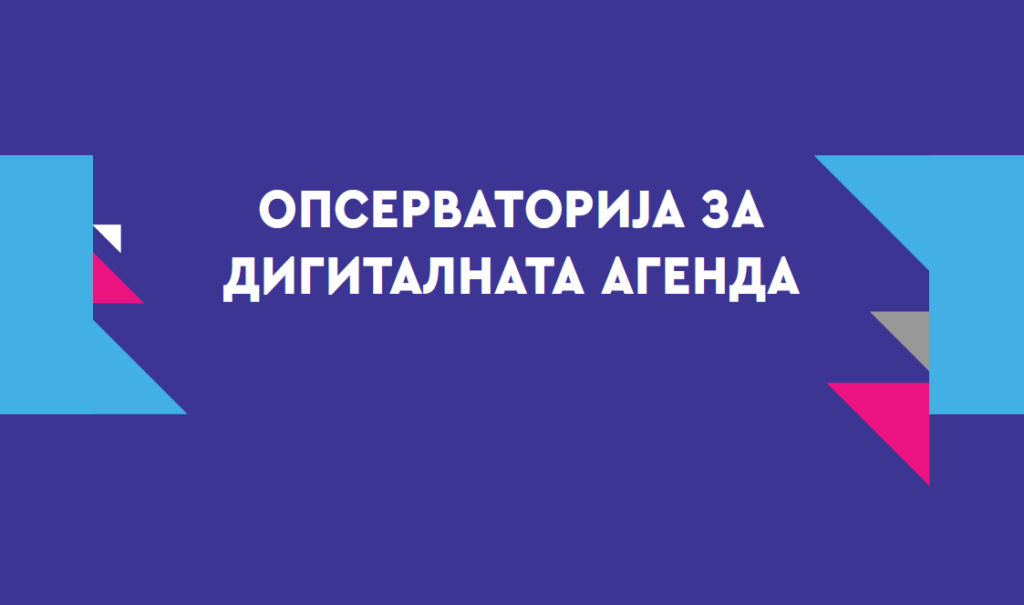 “Only with a clear and understandable approach to all citizens, without exception, can there be sustainable digitalization in all spheres as an effective mechanism for significantly improving the lifestyle of the population. When we talk about digitalization in all spheres, we refer to the advancement and greater efficiency of institutions, organizations and other entities. As today we stand as a witness of the pandemic, we can see that this step is more than necessary for the better functioning of our society, and we can see how this unfortunate circumstance has somehow accelerated the spread of knowledge about the benefits of digitalization. However, we must be aware that rapid digitalization has also brought many challenges – those who have not been taught how to use them properly have access to digital devices, which is why we face hate speech, fake news and disinformation, online bullying, cybercrime, etc.” – said Mila Josifovska Danilovska – Manager of the program Social Accountability and Human Rights Online at the Metamorphosis Foundation, and invited Elena Mancheva – Ministry of Information Society and Administration to presented the Digital Agenda for the Western Balkans.

Mancheva’s presentation was followed by the presentation of the ICEDA Project and the ICEDA Network, together with the Country Report on the current situation and a roadmap for Digital Agenda advancement in North Macedonia, prepared by the Metamorphosis Foundation as part of the project. The report is part of the Digital Agenda Observatory, which is a tool with a special methodology that will monitor the implementation of the Digital Agenda in the Western Balkans in Albania, Kosovo, Serbia, North Macedonia and Montenegro during the project. The purpose of this year’s report is to provide a starting point for further measurement of progress in these areas of the Digital Agenda and to provide additional recommendations for improvement. The topics covered by the Report are closely related to the chapters relevant to the Digital Agenda, in particular Chapter 10 – Information Society and Media of EU Acquis, in order to revitalize the Western Balkans Digital Agenda issues on the EU agenda.

In accordance with the findings of the Report, the roadmap was presented, i.e. a list of 18 recommendations for improvement in the priority areas that jointly provide a roadmap for advancing the Digital Agenda in North Macedonia, which are available in the Report.

After the presentation of the Report, a discussion was opened on the benefits and challenges of implementing the Digital Agenda in North Macedonia in today’s context, in which participated Qendresa Sulejmani – Program Director at the Metamorphosis Foundation, Prof. Vladimir Petkovski – Institute of Economics – Skopje, University “Ss. Cyril and Methodius ”and Elena Mancheva – Ministry of Information Society and Administration. The conclusions of the discussion coincided with the conclusions and recommendations of the Report, namely that there is a need for a systemic approach to address the challenges related to digitalization, through capacity building of the entire population (introduction of cross-curricular subjects in formal education, trainings for digital skills), raising the collective awareness about digitalization and focusing on the quality of the delivered e-services.

Below you can find the useful materials from the project that were looked at during the event.

Visualizations of the Current Status Report and Roadmap for Advancing the Digital Agenda in North Macedonia are available here. 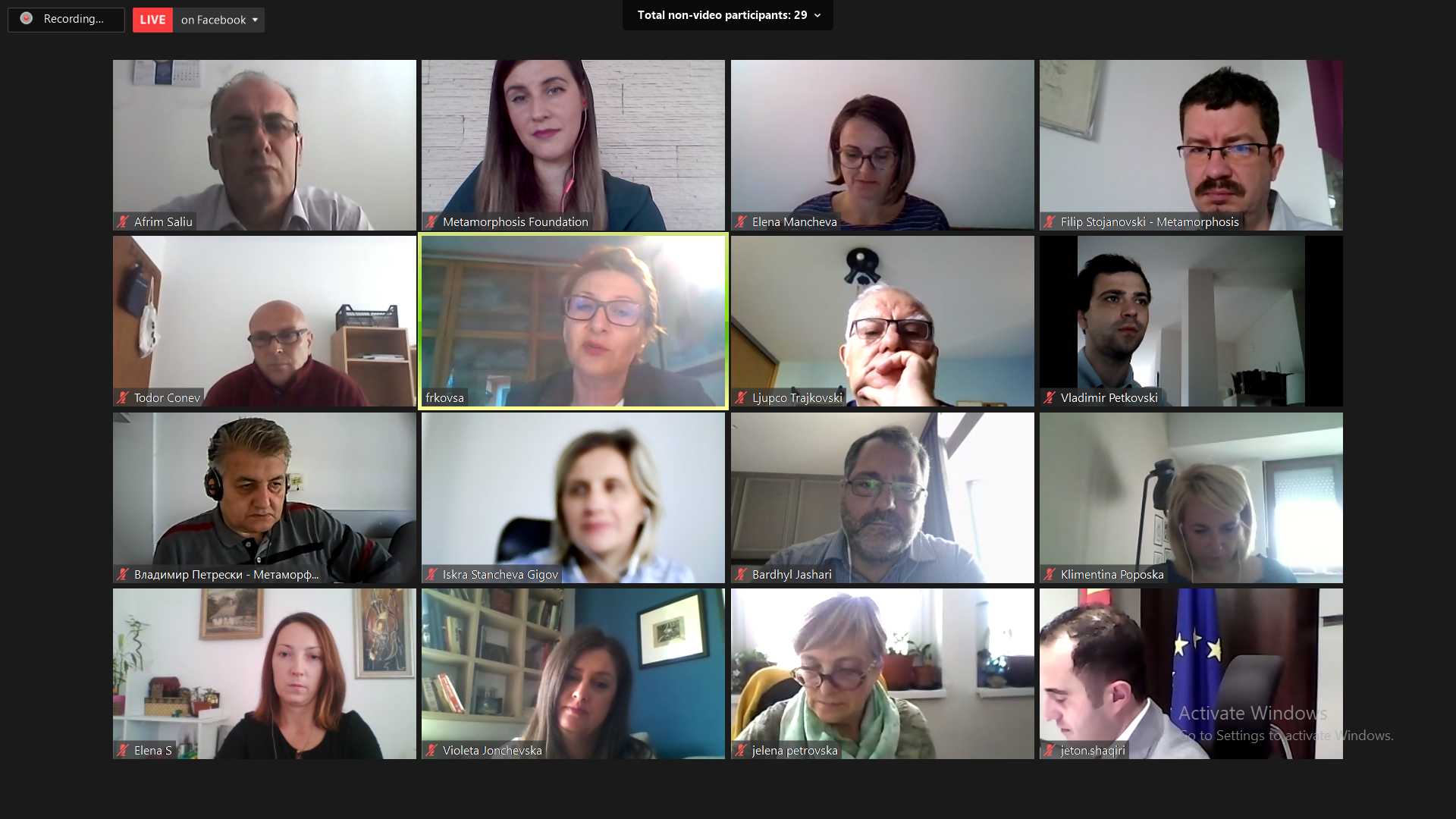