The International Open Data Conference organized by Metamorphosis Foundation on the topic of “Data and the Culture of Openness” began today at the Holiday Inn Hotel. Two sessions of the three-day Conference Program were held, organized within USAID Civic Engagement Project.

The Director of Development of the Metamorphosis Foundation, Filip Stojanovski at the opening of the Conference said that the cooperation with USAID in the promotion of open data will have a similar effect as previous projects in which Metamorphosis and USAID cooperated, as was the case with an implemented and completed project for fact-checking supported by USAID until 2017.

Stojanovski said that the international conference on open data is a continuation of the cooperation with USAID, emphasizing that it is pleasant to cooperate with them and the Ministry of Information Society and Administration (MISA). He welcomed all participants in the conference and wished them success in the next three days.

Acting Representative of the USAID Office James Stein in his address said that he is very glad that in the coming days there will be talk about the use of open data because open data is a tool that provides a culture of trust between institutions and citizens. Stein noted that open data allows governments to take responsibility, while also providing citizens with information on how money is used.

Stein also quoted US President Joe Biden as saying that his administration was committed to the highest values ​​of transparency and democracy. In doing so, open data is a tool to make government decisions more transparent.

In his speech, he expressed satisfaction that the number of open data sets from institutions and municipalities has been increasing in the past period, which can make positive changes in society and promote solutions for the use of open data by citizens. James Stein stressed that USAID is working to support the Republic of North Macedonia on its path to the EU, together with the ministries in harmonizing the laws.

“The progress is impressive and I hope to further share knowledge from all participants in the coming period,” Stein said.

The Minister of Information Society and Administration Admirim Aliti in his address stressed that open data is very important to make institutions transparent, while politicians and managers are accountable and more accessible to journalists and citizens.

Within the cooperation of MISA with the Metamorphosis Foundation, with the regular activities for open data, we continuously work on supporting the institutions with the technical aspects and the way of functioning of the open data portal – data.gov.mk.

“As of today, 543 data sets from 72 public sector institutions have been published on the portal. MISA in cooperation with the Metamorphosis Foundation within the USAID project works to support institutions such as the Ministry of Education, the Ministry of Interior, the Public Procurement Bureau, the Institute of Public Health and the General Secretariat of the Government in the process of opening their data,” said the Minister Admirim Aliti.

He announced that several activities will be implemented in the coming period, such as two-day online training for open data in the five institutions, inventory and cataloging of data sets, creating data sets in an open format and other activities. Until now training for trainers has been conducted with the participation of 20 representatives from 9 state institutions, and an automated webinar with 10 lessons for open data has been prepared.

Minister Aliti also mentioned that amendments to the law are envisaged, in order to harmonize it with the EU directive on open data and reuse of public sector data. A working group for legal changes has already been established, which is actively working to achieve this goal.

The first session of the International Conference on Open Data was about good governance through open data, which was attended by Stanislav Vasilkovski, IT Systems Advisor at MISA, Zlatko Atanasov, State Advisor and Coordinator at the Assembly of RNM, Irena Bojadzievska, Expert on Open Data and Toni Angelovski, spokesperson for the Ministry of Interior (MOI).

Stanislav Vasilkovski from MISA mentioned at the session that the Open Data Strategy in the country was created in 2018 when the open data portal data.gov.mk was launched. The portal is created based on the best world practices.

“It is a platform that can access open data from all institutions,” Vasilkovski said.

He added that the cooperation with the Metamorphosis Foundation will continue in the coming period, and a wider training is planned that will include people who are not in the process but want to be included in it.

Zlatko Atanasov from the Assembly of RNM mentioned at the session that the legislature has two strategic documents, and in the Strategic Plan for the Assembly of the six strategic goals, the open Assemly is listed as the second. First, it was important to determine which data should be open, and the second thing was to put all that data in electronic format so that it would be easily accessible and searchable and could be easily downloaded in open format.

“We used to think that it was enough to put a PDF from the Public Procurement Plan, but it turned out that it was not so,” Atanasov said.

Regarding the open data, the Assembly of RNM was careful, in addition to the fact that they should be in electronic format, to be published in multichannel and non-discriminatory, which would mean in many languages, and also not only on the parliamentary website but on a separate portal for data.

Among the efforts, and within the strategic goal of the Assembly of RNM for ICT infrastructure, Atanasov pointed out that they are working on a new parliamentary website that will provide a better search for citizens and opportunities to broadcast the new parliamentary channel, which the Assembly wants to offer debate shows and own production.

Within this strategic goal of the Assembly is the implementation of monitoring software, which on the parliamentary website can be tracked in real-time to what extent the adoption of a law for which the legislative procedure has begun, so that each entity knows by where the law is, where it should be lobbied and to whom.

Open data expert Irena Bojadzievska said at the session that the first law on open data was adopted in February 2014, so we already have eight and a half years of experience as a country. In addition to the obligation to comply as a country with the new EU directive, the new law is being passed to address the challenges we have faced so far in practice.

Bojadzievska stressed that the analysis of the revision of the EU Open Data Directive showed that the return on investment at EU level from open data is projected to be 149 billion Euros. The added value is that by 2027, based on open data, the number of jobs in the EU should increase between 709,000 and 795,000.

Also, 37% of the institutions answered that the opening of the data is feasible, but their opening requires a disproportionate effort for them.

“They either have insufficient hardware and software equipment or have a problem with IT staff or human and technical resources in general,” said expert Bojadzievska.

“Because we are a small country, we do not consider that we are talking about large fiscal implications for the country and the institutions,” Bojadzievska said.

She added that the funds should not be an excuse why we do not have a higher level of open data.

In order to open the data, in the next period we will have to work with the State Statistical Office (SSO), because the existing data are not in open format and can be searched only in a way provided by the SSO.

The Hydromet Department should be connected with data.gov.mk, says Bojadzievska, in order to enter the data on the environment and pollution, adding that a lot of data should be published in the next period.

The open data from the institutions in the country are perceived to be the work of MISA, but North Macedonia does not have positive examples like Great Britain, where the officials themselves take the lead.

Bojadzievska recommended that in the future there should be greater visibility and promotion of data.gov.mk, and institutions that collect data (especially the Central Registry and the Agency for Cadastre), must publish their costs in advance to have transparent and equal conditions for citizens and companies.

Toni Angelovski, spokesperson for the Ministry of Interior, said that their institution is specific, because they process a huge number of announcements and data that are of public interest.

“It requires staffing and technical means. We all know the state of the country, but these are things that can be overcome if there is political will. If they have the will to open up, then it will be done. The top leadership of the Ministry is especially willing to support openness and transparency,” said spokesman Angelovski.

He mentioned how the institutions are facing staff shortages and insufficient training. Angelovski mentioned that the Ministry of Interior prepares excerpts from daily events twice a day or as needed and several times a day.

Angelovski announced that by the end of June there will be a completely new website of the Ministry of Interior that will be much more visible and accessible to citizens and pointed out that they will promote it very soon.

On the first day of the International Open Data Conference, a special session on creating an open data culture was held in the afternoon, with Bojana Bajikj, Head of the Information Technology Department of the Ministry of Finance of Montenegro, Andreja Glušcevikj, Coordinator for Open Data in the Government of Serbia, Ariana Gjuli from Open Data Kosovo, Aranita Brahaj, Executive Director of the Albanian Institute of Science and Iskra Belčeva Ristovska from the Center for Change Management. 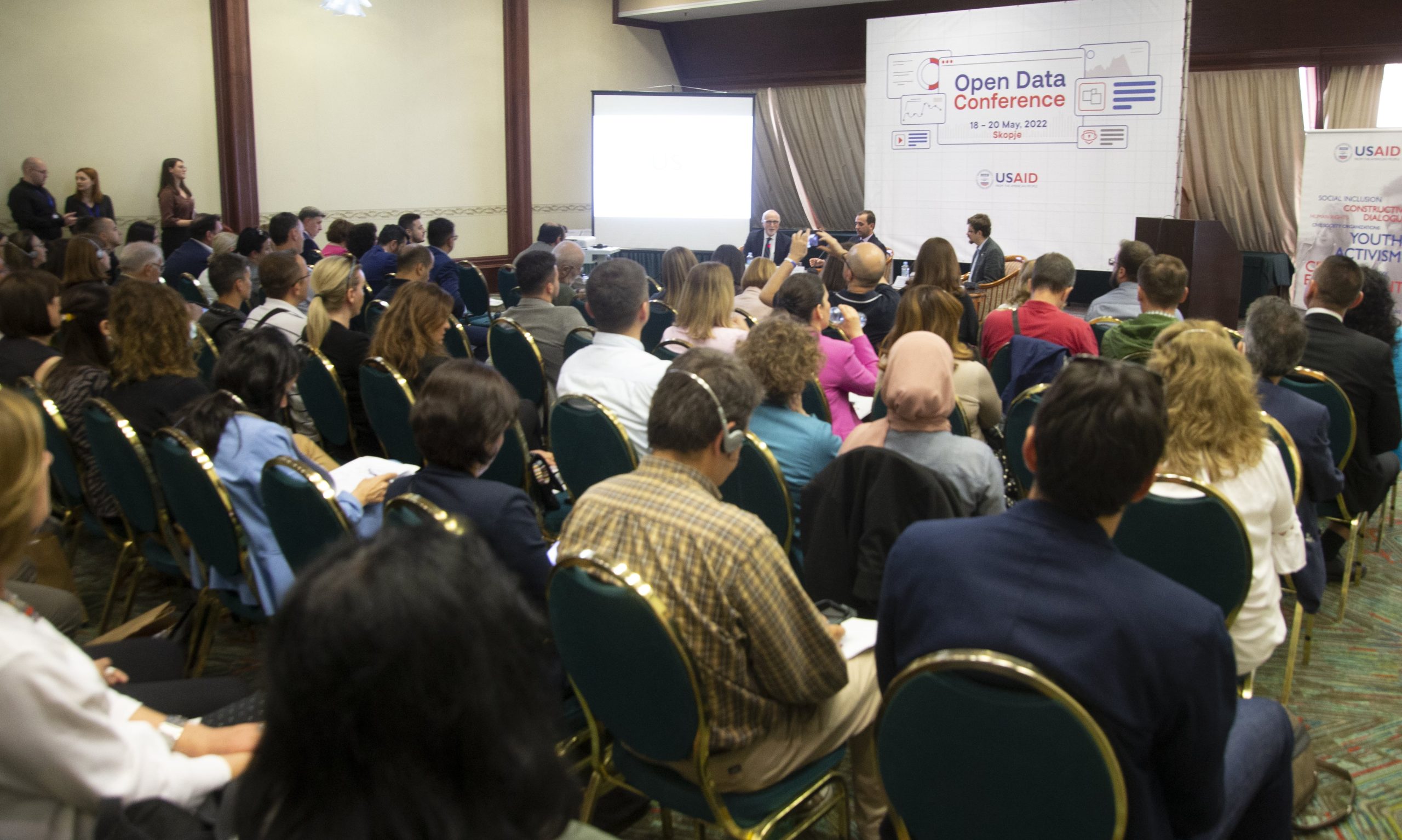 Metamorphosis Foundation actively works to improve the transparency and accountability of institutions at the central and local level and as part of the USAID Civic Engagement Project, implements activities to enhance the openness…