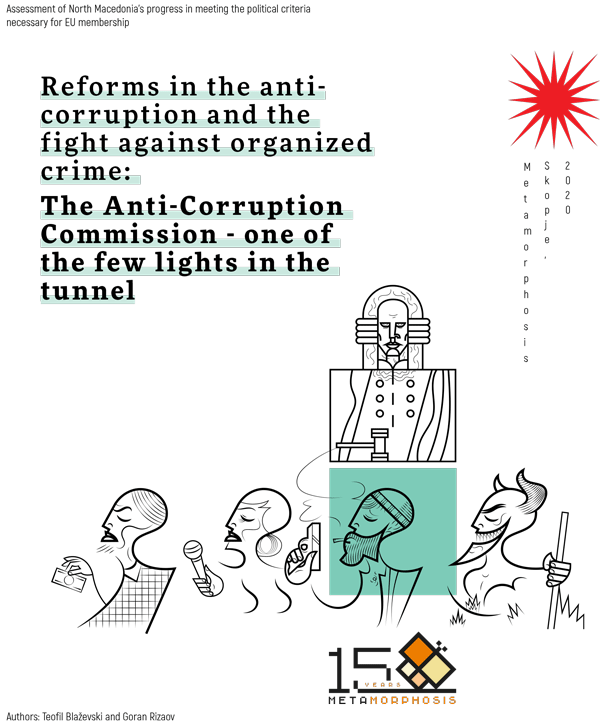 The work of the new composition of the Anti-Corruption Commission, the commitment of several civil society organizations and the prospects of the new Law on Public Prosecution are the only lights in the tunnel of the reform achievements of North Macedonia in the field of anti-corruption and the fight against organized crime in 2019 and early 2020.

This is the main finding of a survey conducted by the Metamorphosis Foundation during a regional good governance project in April 2020.

The enormous number of cases that the State Commission for the Prevention of Corruption (SCPC) is facing and the cooperation with the civil society sector shows that this Commission is now the backbone of society, especially for the prevention of corruption and conflict of interest. But despite the positive results, probably due to the extremely transparent and innovative way in which the members of the commission were elected in the Assembly, many other elements are missing for its even more successful functioning.

The RNM Assembly was unable to adopt the first National Strategy for Prevention of Corruption and Conflict of Interest 2020-2024, developed by the SCPC, although it is a key strategic document that together with the Action Plan for implementation provides clear guidelines and division of responsibilities of all institutions and other entities responsible for combating corruption. In addition, the SCPC still does not receive sufficient financial support from the state to fill the 30 vacancies necessary to strengthen its administrative capacity, and the enhancement of ICT connectivity with institutions is still slow.

Other bodies and institutions responsible for the fight against corruption still have not implemented the recommendations of the Fourth Evaluation Round by GRECO (Group of States in Europe against Corruption). Their implementation and the implementation of the recommendations from the Fifth Round are expected by October 2020, which concerns the executive branch, the police and the Public Prosecutor’s Office.

There are many remarks when it comes to the high echelons of the executive branch, especially in the area of employment rules for persons employed as advisers or assistants on the basis of the discretionary right of officials, as well as in the area of implementation of the existing Code of Ethics. Enormous remarks and recommendations have been made for the police that require depoliticization of the command structure system, transparency in budget spending and much more efficient internal and external control. Comments and recommendations have also been made to the Public Prosecutor’s Office, especially to the Prosecutor’s Office for Prosecution of Organized Crime and Corruption. It has been assessed that the country’s criminal justice system is functioning poorly, and this is also linked to the work of the courts.

This research was prepared according to the available data by the end of April 2020. This research was conducted as part of the regional project “Western Balkans and the EU Accession Process: Applying Political Criteria”, led by the Center for Democratic Transition in Podgorica, Montenegro. The project is supported by the Royal Norwegian Embassy in Belgrade and the Balkan Trust for Democracy, a project of the German Marshall Fund of the United States.