Judicial Reforms: the legal framework is completed, EU is satisfied, but there are still doubts in the country 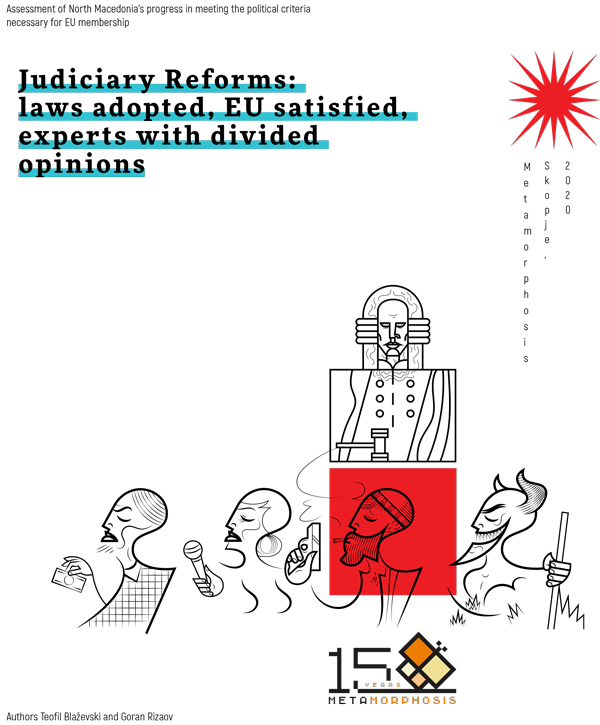 The key area for faster EU integration, the functioning of the legal state and the rule of law, in one word – the judiciary, is currently in a strange situation difficult to define.

Progress has been registered compared to 2019 both in terms of the legal framework and in terms of advancing the practice in some segments of the judiciary. With the adoption of the new Law on Public Prosecution on the last day of the session of the Parliament, 16 February 2020, the legal framework was, de facto, completed. All key laws in the area referring both the judiciary and the prosecution have been completed. But just several days later, the country’s two largest political parties, the ruling SDSM and the opposition VMRO-DPMNE, staged protest marches in front of the Prosecutor’s Office and the main courts in RNM, demanding faster and more selective justice. With this, the parties have now turned their attention to the stakeholders in the area, i.e. to prosecutors and judges.

On the other hand, the Judicial Council of RNM seems to be functioning, so they started with a stronger review of complaints about the judges themselves. Also, the first dismissals occurred, among which was the President of the Supreme Court.

The EU, meanwhile, in its latest supplemented report on the country’s progress, expressed satisfaction with the level of judicial reform.

Staffing problems are common to both the judiciary and the prosecution. Both segments lack judges and prosecutors. The way new ones are recruited remains the same as last year – the Academy for Judges and Prosecutors is the only gateway and prerequisite for promoting new staff.

Efficiency in both the judiciary and the prosecution seems to be closely linked to the aforementioned problem of staff shortages, although according to annual reports from both the judiciary and the prosecution, it is generally good. However, the cases that are 3, 5 and 7 years old in the courts remain a significant number, and the slowness of the proceedings in the high-profile cases submitted by the Special Public Prosecutor’s Office shows that the problem is not always the lack of judges, but the judicial management and the actions the judges take.

The vetting of the judges, according to politicians, remains a possibility, but experts have clearly spoken out against it, and now the so-called soft vetting is being implemented, i.e. verification of a given number of judges by the Anti-Corruption Commission.

Independence, transparency, digitalization and overall IT improvement in the work of courts and prosecutors’ offices still need to be worked on.

The research in front of you was prepared according to the available data by the end of March 2020. This research was conducted as part of the regional project “Western Balkans and the EU Accession

Process: Applying Political Criteria”, led by the Center for Democratic Transition in Podgorica, Montenegro. The project is supported by the Royal Norwegian Embassy in Belgrade and the Balkan Trust for Democracy, a project of the German Marshall Fund of the United States.