“The use of some electronic services has increased, but it is far from the desired level” – News Agency Meta.mk

The use of certain electronic services during 2021, compared to the period 2019/20 has slightly increased. This is shown by the data provided by ICEDA in cooperation with Portalb.mk, comparing them with the data from the preliminary research, when the same electronic services were used less. However, the increase is still far from the level at which citizens should use these services, reports Portalb.mk.

North Macedonia still lacks a database for the use of electronic services provided by public institutions. However, Portalb.mk provided data for several institutions, which were the target of the research for 2020, so a comparison was made to what extent they were used then and what is the situation now.

In December 2019, the National e-Services Portal was launched, which provides citizens with access to information on public services from relevant bodies and state entities. Also, through this portal, requests can be submitted for obtaining some e-services, for payment of fees or administrative fees, for monitoring the status of procedures or for taking other steps in performing any administrative service. However, to perform them they must first open an account or create an “eID” profile.

The portal offers 839 services from 1,288 public institutions, 50 of which are electronic. 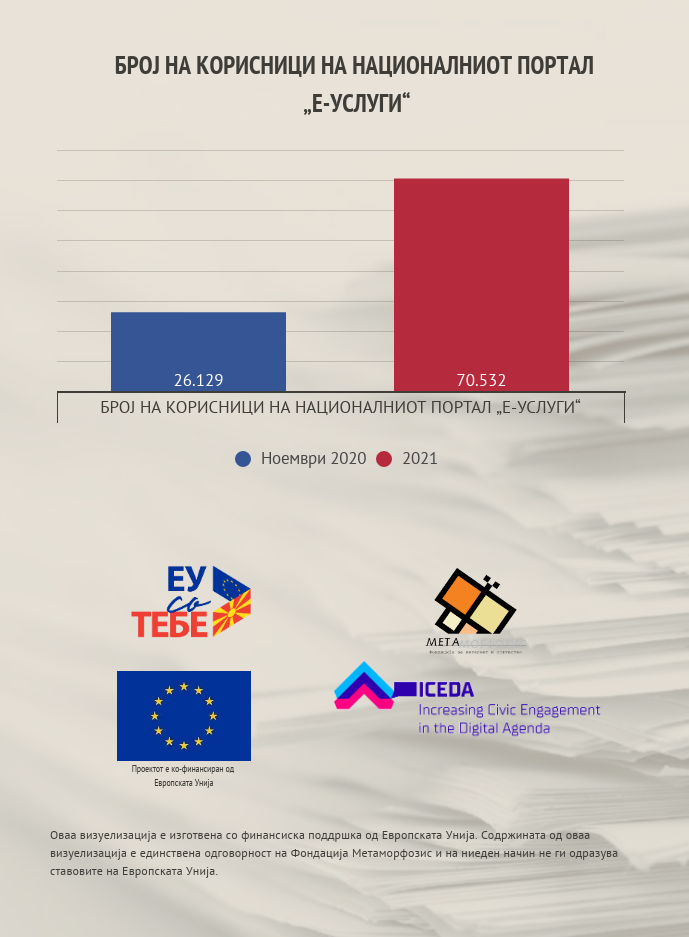 Office for management of registers

The Office for the management of registers manages the registry books, i.e. records, and issues birth, marriage and death certificates. There are regional offices throughout the country, but this institution does not have records on how many applications for birth certificates were received over the counter, i.e. how many citizens submitted the applications with a physical presence.

The institution has data on the number of submitted applications electronically.

In the preliminary research, we announced that in the period from 2019 to September 2021 a total of 27,764 applications were submitted electronically, while during 2021 this number has increased by about 7,000, i.e. 34,746 applications have been submitted. 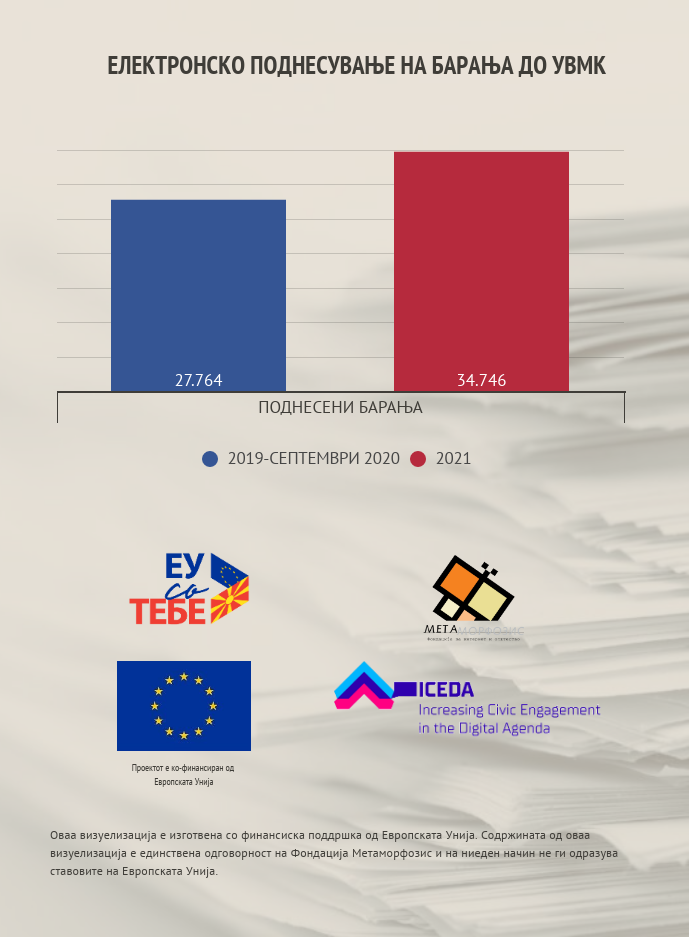 The official data of the Central Registry show that the three services, which were the target of our research, during 2021 were used more compared to the previous period September 2019-2020.

There is an increase in the other two services, namely “ban on participating in public calls, and public procurements” and out of 936 certificates issued in the period September 2019-2020, during 2021 3,739 certificates were issued electronically. This trend is also evident in the service “bankruptcy procedure certificate”, where from 15,004 previously issued certificates, during 2021 that number has increased to 24,834. 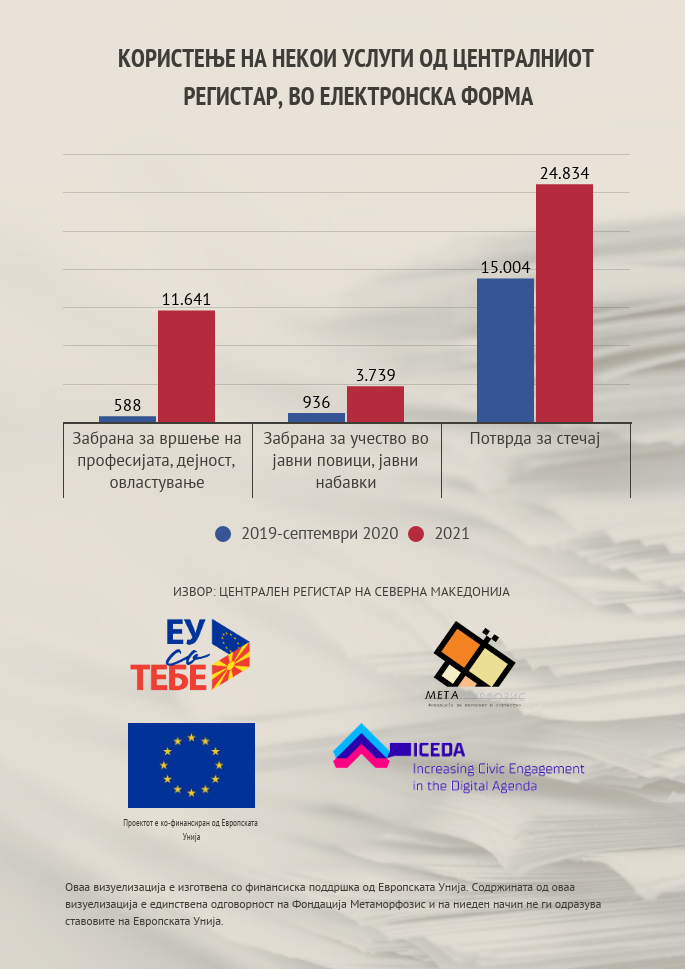 One of the most widely used services is scheduling dates for personal identification documents, driver’s licenses or passports. These documents are issued by the Ministry of Interior, but in order to get them, a date must be set in advance, and this can be done electronically, even via smartphones and mobile numbers.

According to the data of the Ministry of Interior, there has been an increase in the use of the electronic system for scheduling appointments. In 2019 only 21,862 appointments were scheduled in this way. During 2020 (until August) the number of scheduled appointments reached 104,607, while during 2021 this number increased to 172,943. 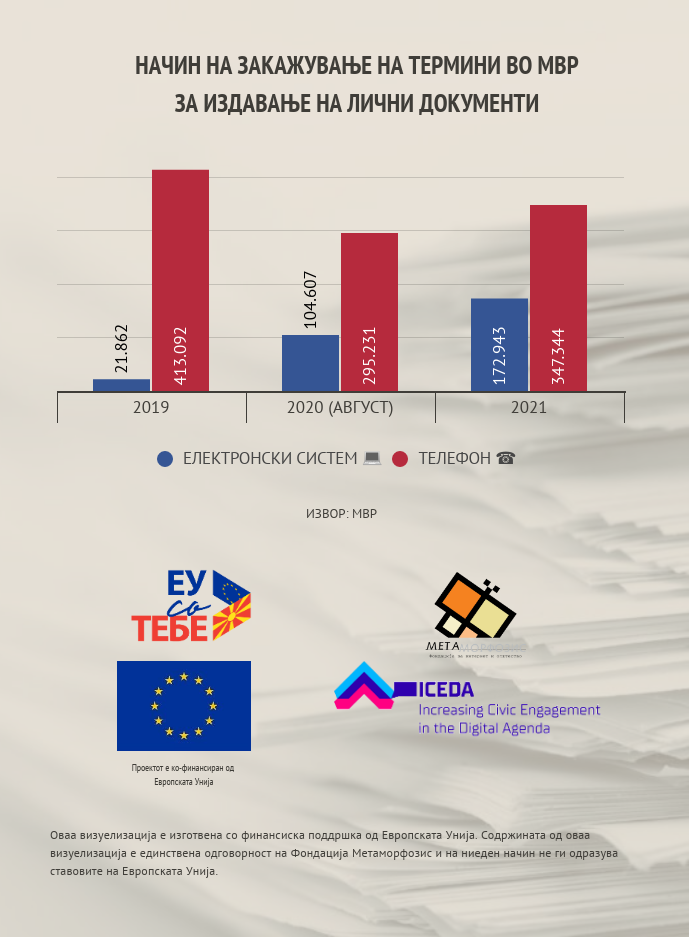 “Increasing the number of registered users of the National Portal for e-services (electronic services) is a step in the right direction, but it is far from the real number of citizens who should use public services. At the moment, according to what I have as information, there are no visible efforts by the institutions to promote the portal or to urge the citizens to use it. Through the two e-Government Support Centers in Prilep and Kičevo, funded by the European Union through the project “Increasing Civic Engagement in the Digital Agenda – ICEDA”, AGTIS and the Rural Coalition are already making efforts to promote the portal, supporting citizens to register and to use some e-services of interest to them provided by the portal and also others services that are not part of it,” says Mila Josifovska Danilovska from the ICEDA project implemented by Metamorphosis.

According to her, a big disadvantage of the portal is that it does not include all the services offered by state institutions and these services cannot be obtained through the portal. Also, not all services are digitalized.

“It is a long process in which all stakeholders must participate – citizens must say which services are their priority for digitalization or to state whether they have difficulties and challenges in using existing e-services. Institutions, on the other hand, should be guided by the needs of the citizens and cooperate with the civil sector and the IT community for their creation “, adds Josifovska Danilovska.

She also adds that in general, we can not objectively comment on the use of e-services in our country when we do not have accurate information that is publicly available so that a comparison can be made over a period of time.

“There is no unified database with all the data on e-services, and it is not known how much they are used electronically, as opposed to the traditional way – with a physical presence. This database is essential for institutions to monitor, evaluate and plan the creation of new e-services or to improve existing ones, to see which e-services are least used and to research, to discover where they need to intensify their efforts or to review the strategy for their promotion, to see if there is a need for capacity building for the target group to use that e-service, etc.”, Josifovska Danilovska said.

According to her, some isolated cases of increased use of services electronically (listed above), are a good indicator that citizens are beginning to understand the benefits of digital availability of services.

“We live in an era in which our lives are developing at a rapid pace and we cannot afford to spend time waiting at the counters for hours, in some cases even days, to get from the institutions a document that is important to achieve some of our rights or some of our benefits,” she said.

Let us remember that the citizens of North Macedonia have a hard time getting documents “with just one click” on the Internet. This is because the state offers a limited number of e-services, the potential of the national portal is not used even though the citizens do have the necessary equipment – they do not have enough information about electronic services. According to the research conducted by Portalb.mk, it can be concluded that it is not even known how many citizens used these services, compared to traditional services – with a physical presence.

If RNM is digitalized like the countries of the European Union, then some documents that should not exist will have to be discarded, because they only increase costs and are a waste of time for citizens to apply and wait to receive them.

Link to the original article: https://meta.mk/koristenjeto-na-nekoi-elektronski-uslugi-e-zgolemeno-no-e-daleku-od-posakuvanoto-nivo-infografik/ 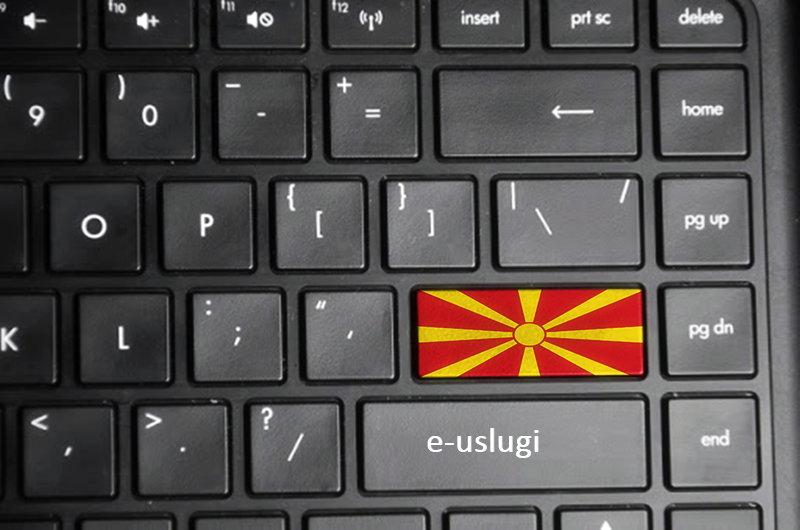 "The lack of interoperability between the institutions in RNM charges 300 denars from the citizens [infographic]" - News Agency Meta.mk

Photo: RNM Government/ Archive photo Despite the fact that in North Macedonia there is a Platform for interoperability or interconnection, according to which state bodies, institutions and business companies should exchange data between them, this works partially. Changing the names of the streets, but not updating the registers, causes additional headaches for the citizens, where […]

Photo: Portalb.mk The Minister of Information Society and Administration, Admir Aliti, in an interview with Portalb.mk, talks about the reform process of the public administration of North Macedonia. He says that the main priority as a Ministry is the digitalization of services but also the adoption of some laws that will enable a more efficient […]

THE HORROR OF PROPAGANDA OR WHEN THE DEAD RISE

Misinformation about the Russian military invasion of Ukraine has led to such divisions of the people in Macedonia, especially those who are getting information mainly from the social media, that there is actually an online debate about whether there really is a war there and civilians are suffering or is it just a Hollywood production […]

Talin, Estonia. Photo: Portalb.mk Estonia is a country that proves that digitalization improves the quality of life of its citizens. Thousands of services, mostly administrative, are performed by Estonians with a few clicks from home, and waiting in line at the counters is part of distant history, writes Portalb.mk. This Baltic country of 1.3 million […]

Our safety on the Internet depends on us too!

Our lives have become unimaginable without the Internet. It has become a powerful tool we use daily, for both professional and personal purposes. The Internet gives us many opportunities to save time and resources, learn new skills, and re-prioritize values. Still, with the increased use of the Internet, we are witnessing the increased amount of […]