“Digitalization is a mission possible only if it is built on a sound IT foundation” – Meta.mk News Agency

New digital learning materials as part of the new Primary Education Concept, electronic tools, interactive whiteboards, electronic registration for high school enrollment, electronic application for a scholarship, for a student bed in a dormitory, keeping records in an electronic way… These are just a few of the opportunities and services that are part of the educational system in N. Macedonia.

The authorities often say that the digitization of education is a condition for the digital transformation of the entire society. However, the question that arises is whether it is first necessary to provide quality IT foundation so that the electronic school records are properly used in practice, and the student is able to apply online for a bed in a dormitory.

Although the educational system of N. Macedonia is lagging behind with the introduction of electronic services, the process should not be rushed just for that reason, without having a good foundation, i.e. servers that will not crash or be susceptible to hacker attacks. The position of the Youth Educational Forum (YEF) is that a solid IT foundation is a priority.

“This kind of haste only worsens the problem and creates additional work for professors and teachers, who have to work with both electronic and printed versions of school records, indexes, etc.,” YEF says.

YEF has worked on a project called “Student Action for Digitized Educational Services” through which a digital tool was developed (through an organised student hackathon) to reduce the number of unreported grades and lost paper exam applications, specifically for Ss. Cyril and Methodius University. It has been noted that higher education institutions are paying special attention and are planning to introduce digitization of teaching, new innovative teaching methods, investment in ICT assets and the like.

“There is an obvious discrepancy between what educational institutions plan to digitize and what students expect. Namely, students are more hoping for digitization of the administrative procedures of the faculties, which are in abundance, in order to reduce waiting in lines in student services, spending money on exam registrations, semester certificates, payment of tuition fees, problems with lost registrations, indexes, payment slips. There is a discrepancy between what institutions have planned and the services that students hope will be available to them. They would rather accept a digital form of registering for an exam, than a smart board or new innovative methods of learning from home”, YEF says.

It was also noted that digitization is a costly process and UKIM as the largest university in the country, which includes a large number of faculties with different levels of digitization, and at the same time operates on the basis of archiving all documents in printed form, cannot go through the digitization process as fast as required, or at the same speed as other private and public, far smaller universities.

What the educational authorities announced last year is that according to the Primary Education Concept, textbooks in digital form are planned, which will not be just ordinary textbooks attached online in pdf format but should offer a certain interaction, i.e. an opportunity for students to solve quizzes, tasks and the like. Does our country have the money and capacity to enable something like this? According to YEF, this is unlikely.

“Digitalization is an expensive process, which needs to be constantly updated and “guarded” against hacker attacks, that’s why it is being delayed. IT people are required to monitor and update those interactive programs for students. The dean of FISCE (Faculty of Information Sciences and Computer Engineering) emphasized that it is very difficult to retain/attract IT staff to work in UKIM because the faculties cannot offer the monetary compensation that the person receives in other private businesses. It is unlikely that there is money and capacity to introduce such programs”, the organization believes.

The Minister of Education and Science Jeton Shaqiri, on the other hand, believes that with the new Primary Education Concept, digitalization in education has risen to a higher level, as a way of getting closer to the global trends of quality education.

“Since the beginning of the past school year, the new digital learning materials have been in use, according to the new curricula for the fourth grade. In the next school year, interactive materials will be used by fifth-grade students, and the phased introduction is in line with the development of skills for the application of IT technology and electronic tools. And in the classrooms, we are introducing modern IT technology, interactive boards and other aids that enable better teaching,” said the minister.

This research story was prepared as part of the project “Increasing Civic Engagement in the Digital Agenda – ICEDA”, co-financed by the European Union and implemented by the Metamorphosis Foundation (North Macedonia), the Academy for e-Government (Estonia), the Movement Enough! (Albania), Partners for Democratic Change Serbia (Serbia), NGO 35mm (Montenegro) and Open Data Kosovo (Kosovo). 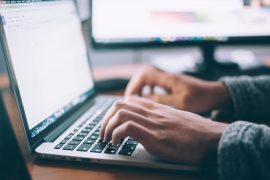 Kristina Petrovska photo: Poralb.mk In an interview with Portalb.mk, Kristina Petrovska from the Office for management of registers (hereinafter the Office) speaks about the digitization of registers, certificates with incorrect data, as well as the electronic services provided by this institution. She says that by the end of 2023, all registry books are expected to […]

Aldo Merkoci, photo: Fisnik Xhelili/Portalb.mk The contemporary challenge faced by the countries of the Western Balkans is the digitization of public services. Compared to other countries in the region, Albania is the leader in this process. Albania’s digital revolution that started in 2013 included only 14 electronic services then, while today it includes 1,225. Translated […]