Children’s Rights on the Internet - Safe and Protected

On May 31, the first screening of the 13 short films in the area of children’s and teenagers safety and privacy online was held in the Children’s Theatre Centre in Skopje. The screening was attended by students from the elementary school ‘Petar Zdravkovski – Penko’, who were also the actors in the films. In the end, every child received a gift – a DVD with the films, a poster and brochure.

This screening was the first of a series of events held across cities in the country. So, on June 1, at the premises of the Municipality of Stip, the second screening was held and it was attended by 80 children from primary schools ‘Vanco Prke’, ‘Toso Arsov’, ‘Goce Delchev’ and ‘Dimitar Vlahov’.

After the event in Stip, a screening was held in Veles on the same day, in the premises of the Focus Foundation, attended by a dozen of children from the primary school ‘Kiril i Metodij’.

The fourth screening took place on June 2 in the premises of the municipal building in Negotino, and the hall was packed with students (about 90) from the primary schools ‘Straso Pindzur’ and ‘Goce Delchev’.

Students who attended the screenings were given brochures developed within the framework of this project, and schools received a package of materials intended for the school, as well as a copy of the DVD with the short films, in order to reach out to other pupils in these schools as well.

At the events, aside from the short films, the online games were also promoted and played together with all the attending children.

The screenings were held in 8 cities throughout Macedonia, the films were seen by more than 470 students from 7th and 8th grade, and materials were provided to about 20 schools across the country. 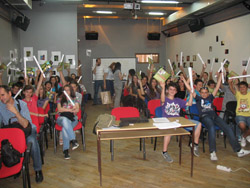 More than 140 countries mark the Safer Internet Day on 5 February under the motto “Together for a better Internet”. The celebration of this day is an action call to all stakeholders to…