Conference “Dealing with Disinformation in the Republic of North Macedonia”

On May 31, 2022, in Skopje, the conference “Dealing with Disinformation in the Republic of North Macedonia” was organized by the Metamorphosis Foundation. This event was dedicated to building a multi-sectoral approach to solving the problem of disinformation through the joint engagement of state institutions, independent media, civil society organizations, academia and the private sector.

The conference was opened by the President of the Republic of North Macedonia, Stevo Pendarovski, who said: “Filtering personal and opposing opinions contributes to the rooting of certain prejudices and values, which increases mistrust and deepens divisions in society.” In his speech, Pendarovski added that disinformation is intended to create fear, and the biggest problem caused by disinformation is the growing suspicion in the opinion of science and expert knowledge that calls into question the objective truth on a global level. 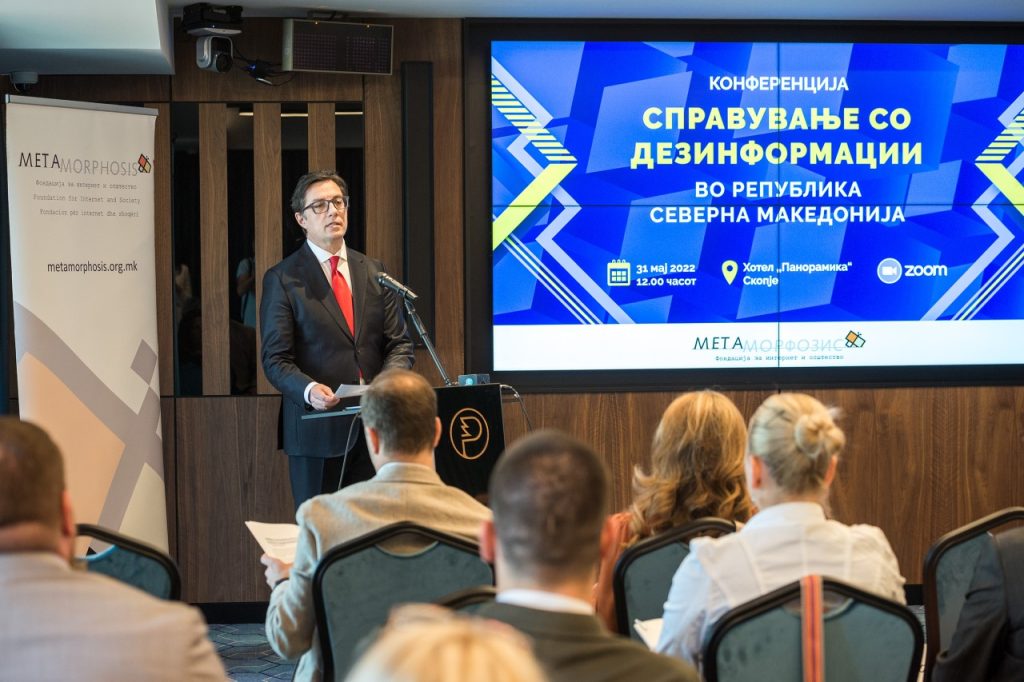 In his introductory video address, the Prime Minister of the Republic of North Macedonia Dimitar Kovačevski pledged that the Government and he personally will consider all recommendations from the conference as an essential contribution to creating a multi-sectoral approach to an adequate response to threats and consequences caused by disinformation. 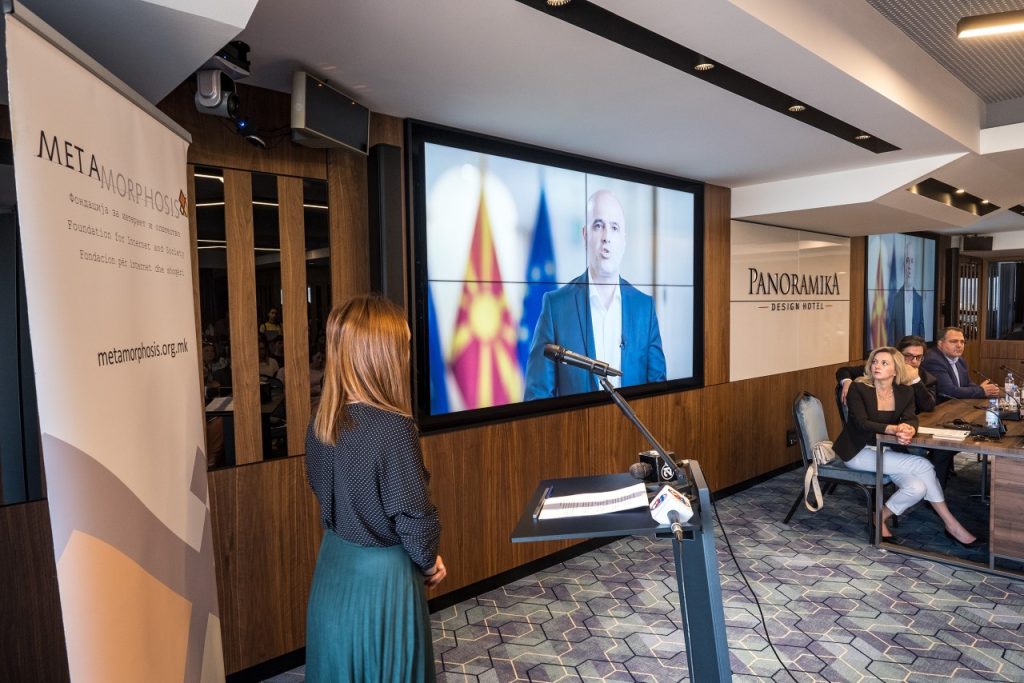 Vukašin Petrovikj, head of the Information Access Fund program, DT Institute, in his address referred to the Russian influence in the attempts to destroy European democratic values. “No matter how the war in Ukraine ends, Russia has managed to undermine the democratic agenda that was supposed to happen in the coming decades,” Petrovikj said.

The Executive Director of the Foundation Open Society Macedonia, Fani Karanfilova Panovska said that disinformation is an endemic and ubiquitous part of politics in all Western Balkan countries, without exception. She stressed that the spread of disinformation is becoming an increasing risk to the security of states and institutions, and thus to the security of citizens and their well-being. “Disinformation is most virulently advancing in environments that are already shaken by internal conflicts and where social and public trust is struggling to bridge political, regional, ethnic, religious or other divisions,” Karanfilova Panovska said. 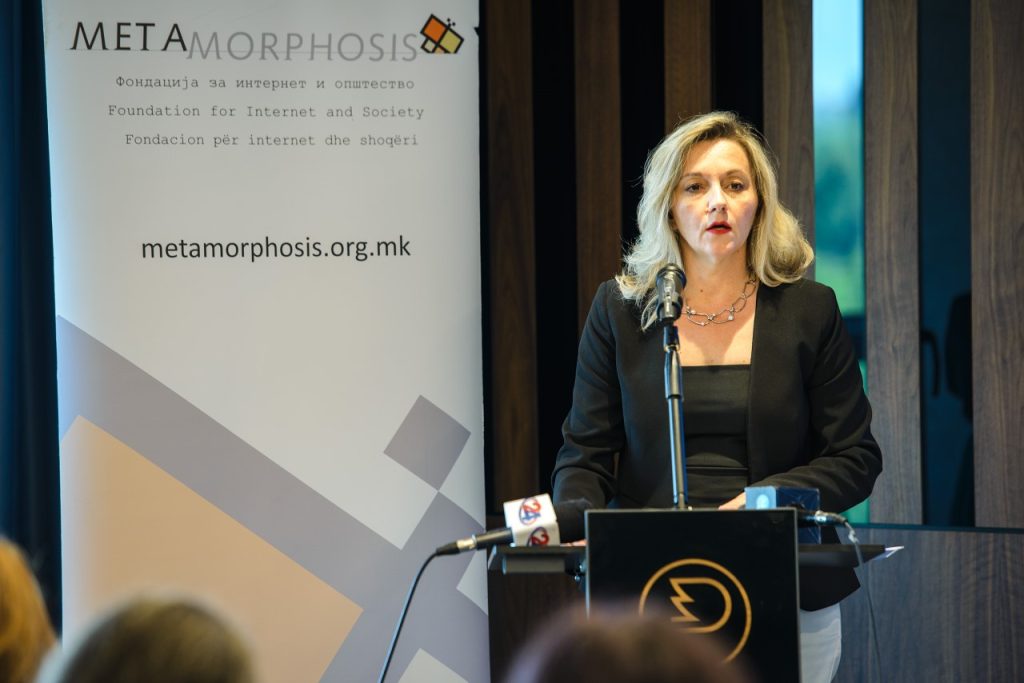 The executive director of the Metamorphosis Foundation, Bardhyl Jashari, in his address said that since 2010 when the media and all sources of information were controlled, it was noticeable that there are tendencies to undermine democratic governance. “Our region and our country are very fertile ground for conspiracy theories. We have seen that we have to work hard to create a critical mass of people who have the knowledge to recognize unreliable sources, propaganda, and fake news and have critical thinking skills to somehow enable our society to become immune to foreign influences,” Jashari said. He stressed that the fight against these “waves” that are coming, whenever an important political process takes place, should be regulated in cooperation with government institutions. 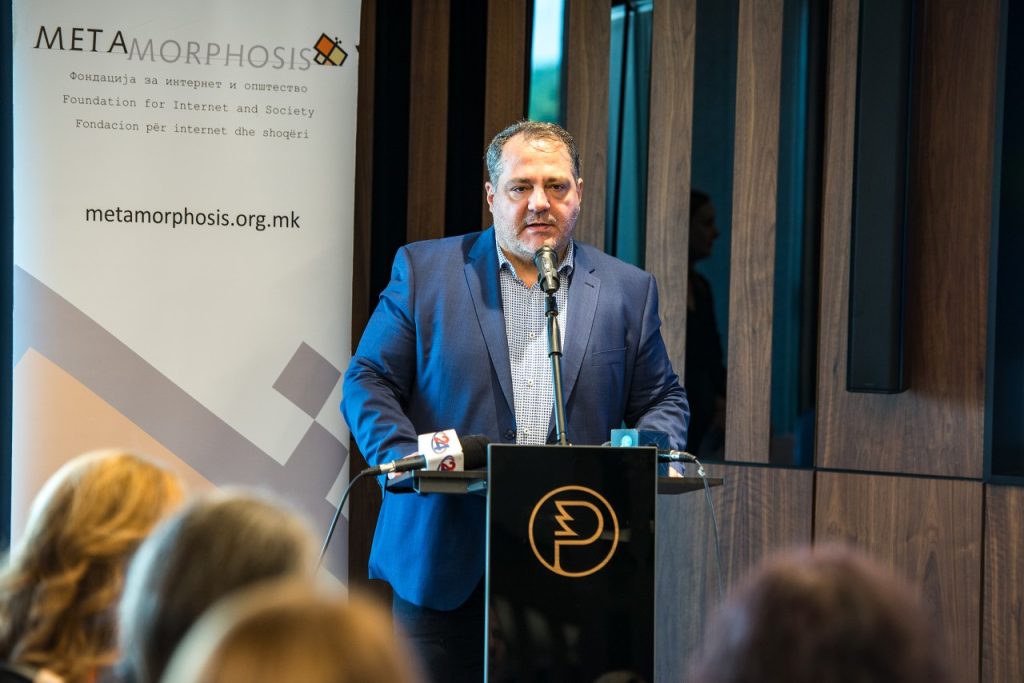 The event consisted of two working sessions. In the first session, the speakers presented and discussed the results of ongoing research on the situation in order to better understand the context. Speakers in the first session were Katarina Sinadinovska, President of the Management Board, Council for Media Ethics of Macedonia – CMEM, Gjorgji Mitrevski, researcher, Andreja Stojkovski, Executive Director of Prespa Institute, and Rosana Aleksoska, Project Manager “Fight against false narratives”, implemented by Citizens Association MOST. The session was moderated by Filip Stojanovski, Director of Partnership and Resource Development of the Metamorphosis Foundation. 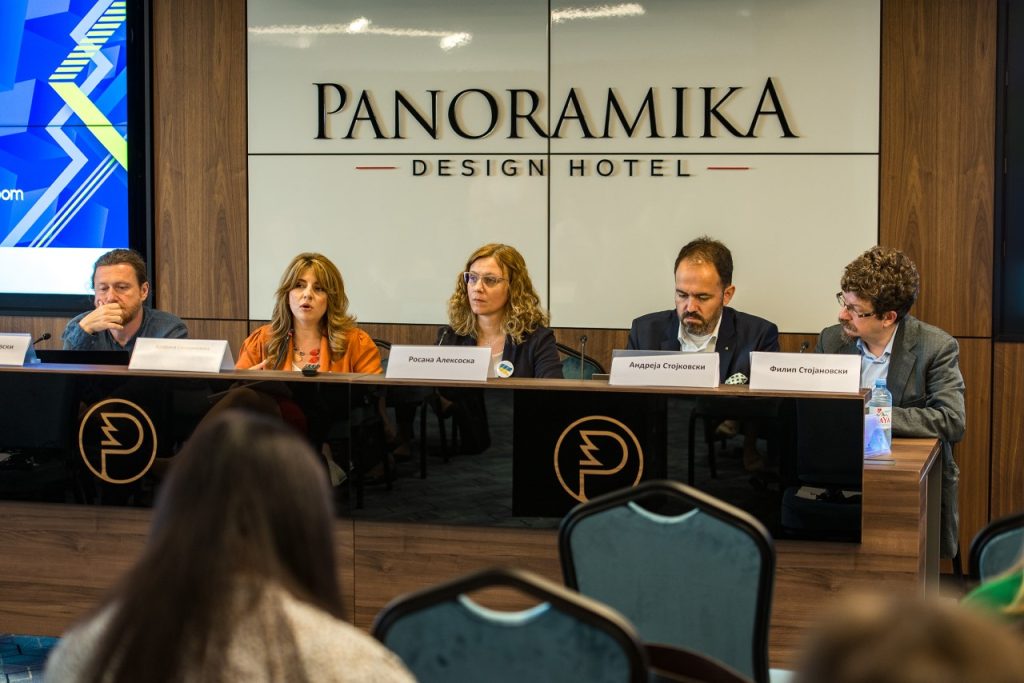 Speakers at the second session were Marjan Zabrčanec, National Coordinator for the Open Balkans and Regional Initiatives at the Government of the RNM, Dragan Sekulovski, Executive Director, Association of Journalists of Macedonia – AJM, Mihajlo Lahtov, USAID Media Project Director, and Xhabir Deralla, President of CIVIL. All these discussed the recommendations and next steps of various social actors in order to jointly oppose the harmful influences directed against the development of democracy and integration processes. The session was moderated by Elida Zilbeari, editor of “Portalb”. 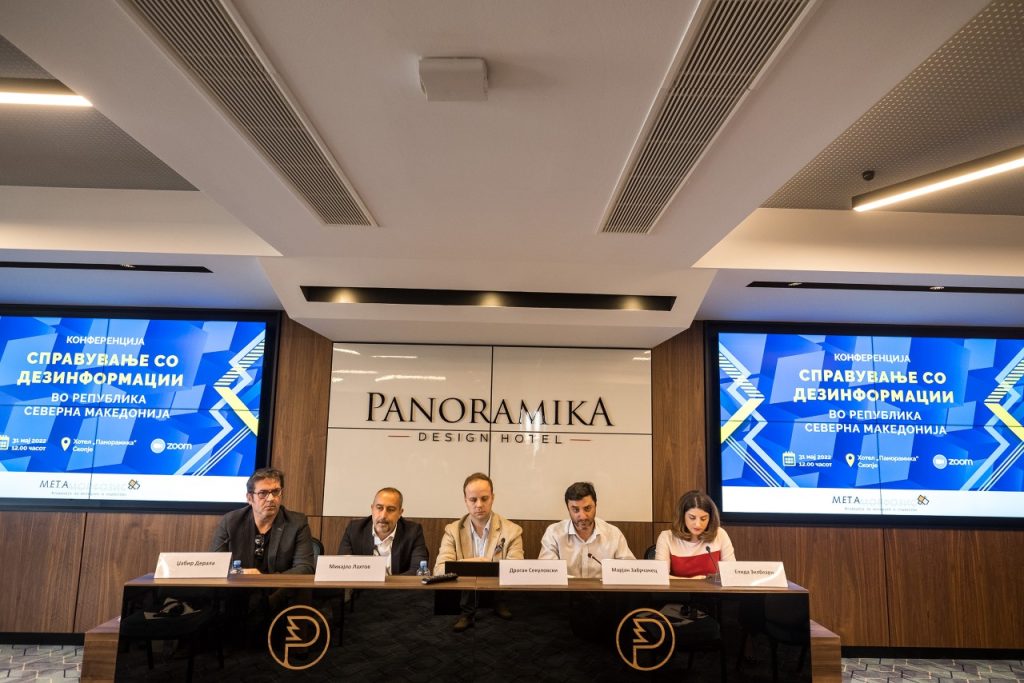 The event also presented recommendations that the Metamorphosis Foundation proposes as a basis for joint social action to address this problem, obtained as a result of the research process and data analysis within the activities to combat disinformation. Recommendations can be downloaded at the following LINK.

The conference provided a platform for discussion among stakeholders working to develop democracy by combating disinformation and promoting freedom of expression, enabling them to network and share experiences. 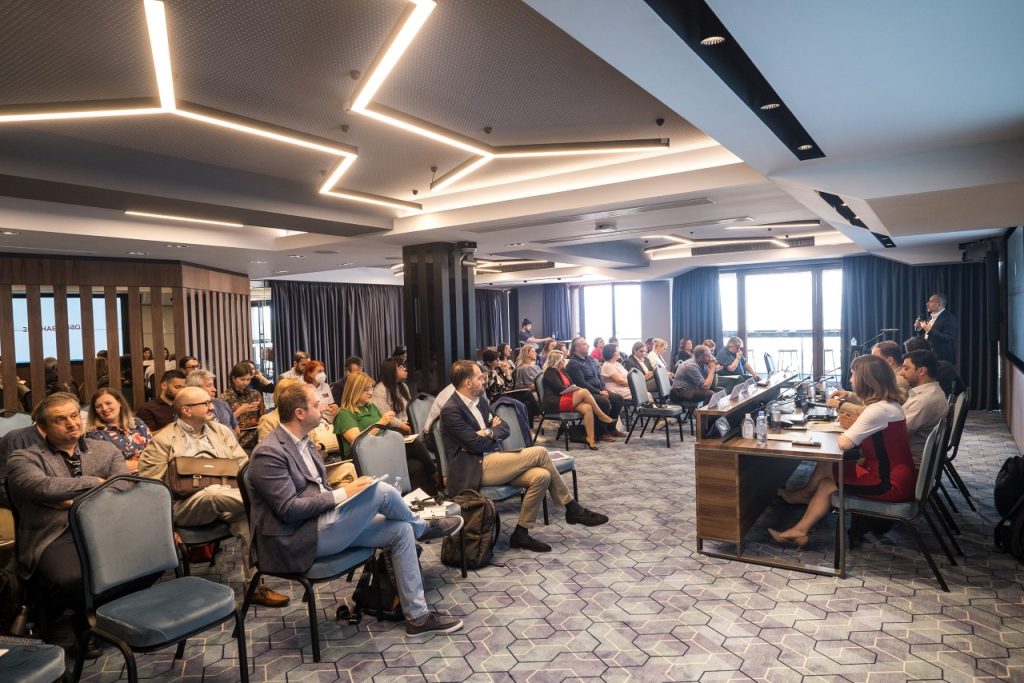 The participants agreed that there is a need for broad social action through which all stakeholders, within their competencies, will be able to contribute to solving the challenges caused by foreign anti-democratic influences, implementing reforms that are part of the European integration process, as well as misunderstandings that prevented joint activity among the actors from the country.

As one of the first steps towards creating such an approach, the representative of the Government of RNM Marjan Zabrčanec pointed out the initiative for creating a National Strategy for Dealing with Disinformation, which emerged from the consultative process that led to the conference. AJM Executive Director Dragan Sekulovski further stressed that public policy building in this area should continue through an inclusive process based on a broad public debate that will overcome various types of challenges.

The entire conference can be watched by clicking on the following link: