“Metamorphosis” debate: Media Sector Reforms should be a continuum, not a start-stop process

There is no fulfillment of the reform process in the media sector if there is no consistency in the political will to implement that process, was a joint conclusion from the debate held by the Metamorphosis Foundation, after the presentation of its report on monitoring of media reforms 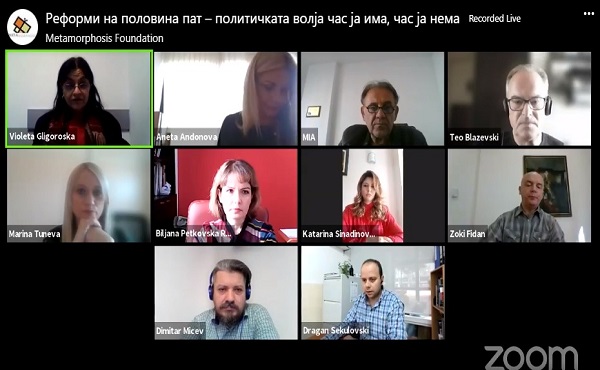 The average score of 3 on a scale of 1 to 5 can drop down to 2 if the stagnation in the reform process in the media sector continues. This is a paraphrase uttered by one of the participants in the debate in which all segments important for the work of the media in RNM were discussed. This debate was attended by representatives of national and regional media (MRT, MIA, TV VIS, Portalb, META.MK, Vistinomer…), representatives of the Media Agency AAAMS, the journalistic associations AJM, SSNM, CEMM and MIM, the civil society organizations Metamorphosis and CRM and others.

The online debate was held on the occasion of the presentation of the Metamorphosis report on the reforms in the media sector entitled: Halfway completed reforms – the political will is here one moment, and gone the next.

The participants in the debate confirmed the findings of the Report and discussed the most important segments: the safety of journalists, the use of public money in private media through two segments – paid political advertising and the non-fulfillment of the legal obligation to finance the broadcasting sector as a whole, which affected all users of that money MRT, AAAMS and MRD, insufficient support of the news agency MIA, self-regulation as a process, which together with the Register of Online Media is led by the Council for Media Ethics in Macedonia (and AJM), as well as the question whether the state needs a national strategy for the development of the media market or the Broadcasting Market Strategy that exists and is an obligation of the regulator AVMS is sufficient.

What needs to be done?

Several key points were highlighted by almost all participants in the debate:

The report and the debate were part of the activities of the project “Promoting the Accountability and Transparency of Public Reforms“, implemented by the Metamorphosis Foundation for Internet and Society from Skopje, with the support of the US National Endowment for Democracy. The project is being implemented during 2021 and 2022.

The whole debate can be accessed HERE.

The Metamorphosis Foundation is pleased to invite you to a presentation and debate on the report related to the monitoring of the EU integration process – Public Administration Reform. The debate “Administering…