“Presentation of the report and guidelines for the advancement of the Digital Agenda in North Macedonia” – Meta.mk News Agency

The current outflow of personnel at a high administrative level, the lack of updating and implementation of strategies, the limited access to electronic services, but also the low level of interest of citizens in e-participation, are part of the challenges noted in the Third Report on the current situation and a roadmap for the advancement of the Digital Agenda in North Macedonia published by the Metamorphosis Foundation.

In the report that was presented at today’s dialogue “Digital agenda for citizens – Digitalization and digital transformation for more efficient administration”, which refers to the period June 2021 – June 2022, it is noted that despite the fact that the number of e-services, and the number of users increases from year to year, the uslugi.gov.mk portal is not sufficiently promoted among citizens. At the same time, a large number of services are not electronic at all, and for those that are, there is a very long wait, which is inappropriate to their meaning and purpose.

“All services are not electronic. They are listed on the portal, but they are not electronic, that is, they only indicate how certain services can be obtained over the counter and how citizens can contact an institution and receive the service. Moreover, this portal is not a one-stop shop for all services. Not all services are registered, and the existing ones are not fully digitized. It is necessary to make a greater commitment to improving the functionality of the portal,” said Natalija Šikova, PhD and Associate professor at the Faculty of Law of the International Balkan University.

In terms of political will and strategy, it is at a high level and is part of the Government’s priorities. There are numerous strategies in this area, but many of those strategies are outdated and need to be updated.

“In particular, we are talking about the long-term National ICT Strategy, which is ready, but its adoption is being delayed. The biggest problem with the strategies, in addition to not being updated, is their implementation,” said Šikova.

The survey noted that most of the national strategies refer to services that are received at the central level, while digitization at the local level is neglected.

When it comes to interoperability, interconnection and data exchange between state authorities, institutions and business companies in North Macedonia is enabled through the Interoperability Platform. However, since 2021, no new institutions have joined this Platform, but some of the present are not ready to interoperably offer their services.

“Of all the institutions that are currently on the Platform for Interoperability, only 14 are entirely technically ready – they have staff, technical conditions and an appropriate modern software solution. We rated 10 institutions with a medium level, where some of the mentioned segments are missing. The institutions with a low level, where there are 10 institutions, which is a serious number considering that we have a total of 35 institutions on the Platform, neither have technical staff, nor equipment, nor a modern software solution to be able to provide interoperable services”, emphasized Irena Bojadzievska, PhD, Assistant Professor at the University American College in Skopje.

No matter the fact that we have a platform for interoperability, the benefits that citizens should feel from interoperability are not yet present in practice, Bojadzievska added.

Despite the fact that in the country there is an appropriate legal framework for who can be a provider of a digital signature, the two companies that are the only ones certified for this – KIBS AD Skopje and Makedonski Telecom AD Skopje, did not answer how many legal and physical entities are users of digital signature.

When it comes to digital literacy, however, Bojadzievska says that this year it finally became clear that Macedonia will not have a single national strategy for digital literacy, but this strategy will be integrated into three different policies.

“One part of the strategy will be placed in employment policies, another in the National Education Strategy and a third in the long-awaited ICT strategy, where digital skills will be divided into digital literacy of the population, but also of the administration because we cannot expect electronic services and building an information society if the employees in the institutions do not have the adequate technical knowledge to ensure these conditions,” said Bojadzievska.

In the recommendations of the Report, it is written that it is necessary for the Government to appoint a speaker who will regularly report on the progress regarding the implementation of the Digital Agenda and whom the citizens will recognize in that context. Furthermore, the need to invest in resources in the institutions in order to overcome the lack of IT staff, the obsolescence of technical capabilities or the complete absence thereof.

“The development of digital technology touches virtually every segment of our society and gives us the opportunity to improve the quality of our life and the services that institutions provide to citizens, to make institutions more efficient and thus save time and money that are spent in the provision of the services, but also in the functioning of the system”, said Grkovska. 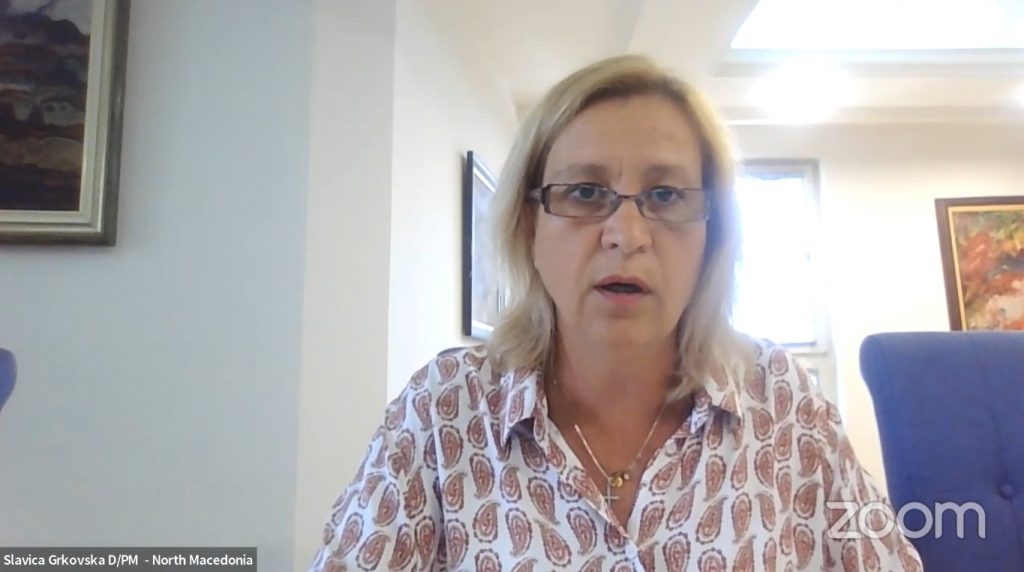 Grkovska added that the digitization process is taking place with the dynamics that the number of staff in the institutions allows and that this process should not be rushed.

“Thanks to the PRO, we have an account that can be used to receive the Government’s e-services, but we have systems like that of the Cadastre, which has a different account. With the establishment of an electronic identity card, for which there is an undivided opinion in all countries that it represents a basis for digital transformation in society, citizens will have the opportunity, only with an ID card to have access to all electronic conditions of the Government, without being in a situation to remember the different accounts from different institutions, with one account”, said Grkovska.

Professor Boro Jakimovski from the Faculty of Information Sciences and Computer Engineering (FISCE) emphasized that FISCE has been actively working in the field of ICT personnel education for 11 years and actively contributes to the development of the digital society and the digitization of the state.”It is very important to note that we are actively working to support the implementation activities of the digital compass of the European Union adopted about two years ago.

We must be aware that what Europe calls digitization does not mean only the use of computers, but the use of advanced technologies in decision-making, and the implementation of services, but of course, the focus of the digital compass is also the introduction of innovative digital hubs where in the future, technologies will be developed and future startups will be formed that will take the economy of Macedonia, but also the increase of digital skills and the introduction of new electronic services by the public sector”, said Jakimovski.

The President of the Basic Court – Kavadarci, Lazar Nanev, emphasized that without motivation and good organization there can be no talk of digitization at all and that the bureaucracy in this case creates one of the biggest resistances.

“The digitalization process is actually a struggle of the state against the state. Bureaucracy, i.e. all human resources, creates one of the biggest resistances. When you hear that the digitization process should last 25 years, it is really demotivating and discouraging,” said Nanev.

Despite the change of government in 2016, we have reason to claim that we have an authoritarian public sector, said Katerina Kolozova from the Institute for Social and Human Sciences from Skopje. She emphasized that digitization should enable the political culture of the institutions to turn from authoritarian to a service for the citizen, where the institutions and the public sector will be at the service of the people. Decapturing institutions will not be complete without digitization.

“It is a system setup; a structure probably inherited from the previous system and has not undergone a value transformation. For the entire transition process, to this day our political culture remains fundamentally authoritarian. When we say that, it does not mean that the people want authoritarians, but it means that both the people and the institutions are used to being authoritarian. It is a system in which the public sector serves to protect the state from potentially harmful citizens. “That’s why the citizen is the one who goes with three thousand notarized certificates for everything and anything and proves himself before the system, instead of the system checking on their official duty and thereby giving the citizen a better service,” said Kolozova. 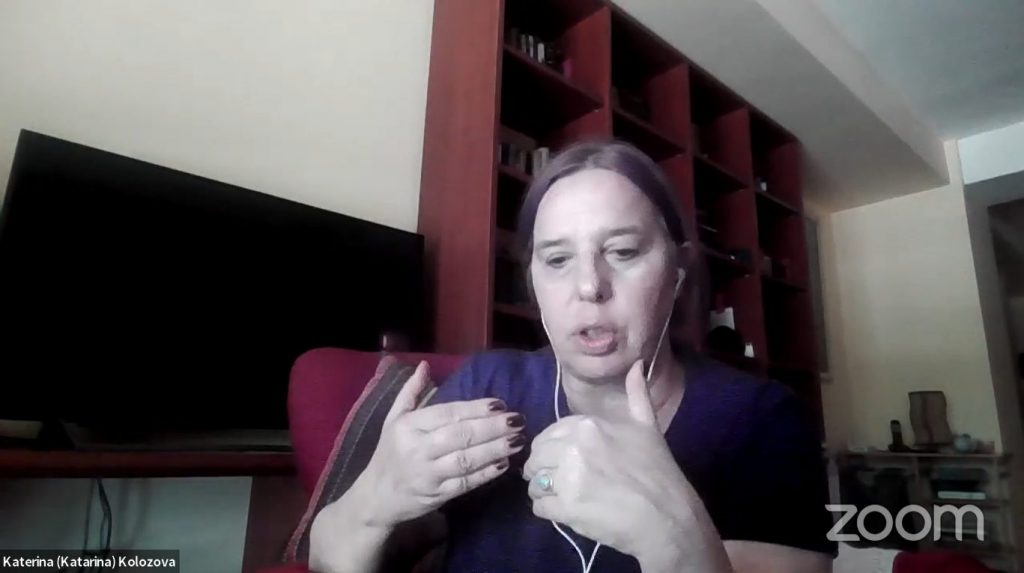 Iskra Belčova Ristovska from the Center for Change Management emphasized that digital services and the transformation of the administration towards digital work are not only aimed at better services for citizens, but in this way, the employees in the administration will be more efficient, and corruption in the public sector will be reduced. According to her, the state is not ambitious enough regarding the use of digital services.”We are not ambitious enough yet. When we talk about the National Employment Strategy, there is an indicator that by 2027 ICT equipment will be provided to at least 50 percent of public educational institutions. This is far from how we want the state to be ambitious in terms of setting up the infrastructure for the digital transition,” said Belčova Ristovska. 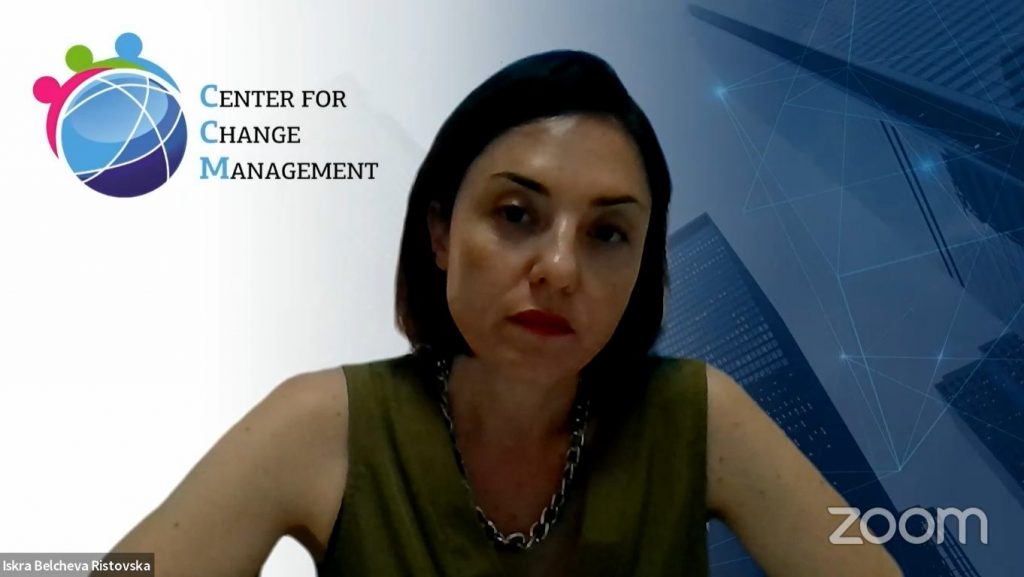 She said that the announcements for student and student scholarships, subsidized student meals, accommodation in student dormitories and enrollments in secondary education, which took place electronically last year, were accepted by the target audience and proved to be more efficient, but also more transparent, in contrast to the traditional ones.In addition, the preparation of the presented Report is part of the project “Increasing Civic Engagement in the Digital Agenda – ICEDA”, co-financed by the European Union.

The Metamorfosis Foundation, through its representative Mila Josifovska Danilovska (Program Manager of the Social Accountability and Human Rights Online programs), was part of this year’s event of the Balkan Investigative Journalism Network –…