Though the legislative power is the most open in the country, the Parliament of the Republic of Macedonia is below the regional average in terms of the level of openness. These are the results of the Research on the level of openness of institutions in six countries in the region that was carried out within the project ACTION SEE – Accountability, Technology and Institutional Openness Network in SEE, which is implemented by Metamorphosis Foundation for Internet and Society.

According to the research results, the Macedonian Parliament fulfils 59% of the openness indicators which is below the average 63% of the other parliaments in the region. However, when talking about the Parliament’s work and openness, the context in which the most significant state institution (does not) functions cannot be left aside.

Since the general elections in 2014, the Parliament has been totally or partially blocked, starting with oppositional non-recognition of the election result and the 15-month boycott of its work.

The constitutive session, chaired by the president of the previous parliamentary composition, is still in progress, even though the snap parliamentary elections took place in December 2016. For four months, the country has been without a mandatee that should form the government because the President refuses to entrust the mandate to the parliamentary majority. Additionally, the MPs have been debating the election of the president of the committee that should propose the new Speaker for a month now.

Under such conditions, the dedication toward policies and practices that would improve the institution’s openness is difficult to expect. Notwithstanding, the civil sector is the one that keeps its weather eye open and offers proposals for improvement of the Parliament’s work.

Despite the deep institutional crisis, the Parliament remains the most open window of the three powers. It regularly publishes agendas of the plenary sessions and the working bodies, videos and verbatim reports of the plenary sessions, MPs’ attendance lists and voting records from plenary sessions, MPs’ contacts and biographies (but not their salaries and travel expenses allowance they have solicited) and annual reports as well. In this regard, the Parliament could be the exemplar of openness for the other powers, particularly the government, which does not publish neither agendas nor minutes and conclusions of the held sessions.

Furthermore, parliaments in the region meet on average 63% of openness criteria. This result is not satisfactory, taking into account that we talk about bodies which are directly elected and accountable to citizens.

It is defined by monitoring that parliaments are mostly not transparent when it comes to publishing data from sessions of parliamentary committees. Majority of parliaments does not publish voting records and list of MPs who attended boards’ sessions. In addition, in most countries committee sessions are not transmitted.

Most of the parliaments in the region have to affirm a principle of financial public and openness. Parliaments mostly do not meet even a minimum of international standards of budgetary transparency which impose availability of financial documents to the public. On official websites of most parliaments citizens cannot find budgets for the all previous three years. Additionally, a huge majority does not publish final accounts. Parliaments should conduct control of public expenditure during the year and to publish midyear reports on budget spending.

The analysis “Openness of parliaments in the region and Macedonia” is an activity within the project ACTION SEE Accountability, Technology and Institutional Openness Network in SEE implemented with financial support of the European Union and the project Using New Media to Promote Government Transparency, implemented with financial support of NED – National Endowment for Democracy.

The project ACTION SEE – Accountability, Technology and Institutional Openness Network in South-East Europe is implemented by Metamorphosis Foundation in partnership with Westminster Foundation for Democracy from Great Britain, CRTA – Center for Research, Transparency and Accountability from Serbia, Citizens Association Why not? from Bosnia and Herzegovina, Center for Democratic Transition from Montenegro, Open Data Kosovo (ODK) from Kosovo, and Levizja Mjaft! from Albania.

The project aims to increase the inclusion of civic society and media organizations in decision making processes and the creation of public opinion and policies, as well as to raise the capacity of civic societies to address sensitive issues. 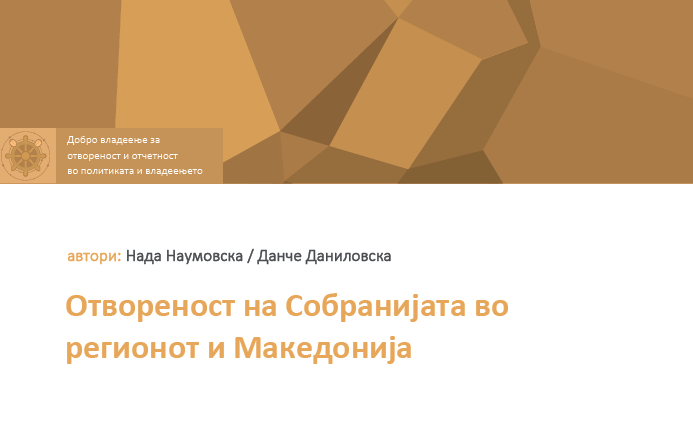