The situation with the outbreak of the Coronavirus not only accelerated the digital shift but also increased the need for resolving pre-existing issues and new policy responses in the Western Balkan countries.

When it comes to digital transformation and its influence on the labor market, opinions vary. There is a fear that many people will lose their jobs. At the same time, digital advancements bring new job opportunities with increased productivity and enable efficient, effective, and transparent public services.

Digital transformation is increasingly prioritized by both the public sector and the businesses, and with a good reason. In recent years it became evident that if we don’t embrace technology and adjust our skills and habits accordingly, we are at risk of being left behind.

Throughout the years, Western Balkan countries confronted different labor market problems in labor market structure and unemployment rates. Many factors influence the future of work, and digital change is among the most important ones.

The influence of technology on the labor market has been questioned since the beginning of industrialization. The doubt whether people will lose jobs or new jobs will be created also follows that question. In the Western Balkan, a certain amount of fear and resistance exists. The main reason is that keeping up with the fast-changing technology brings about a change of long-term routines. There is also a need for more education, policy and procedure changes and, above all, there is an inevitable process of constant skill upgrade. The generational gap plays a role when talking about being accustomed to the digital world. Note that the average working force in the Western Balkan is between 15 and 64 years old. 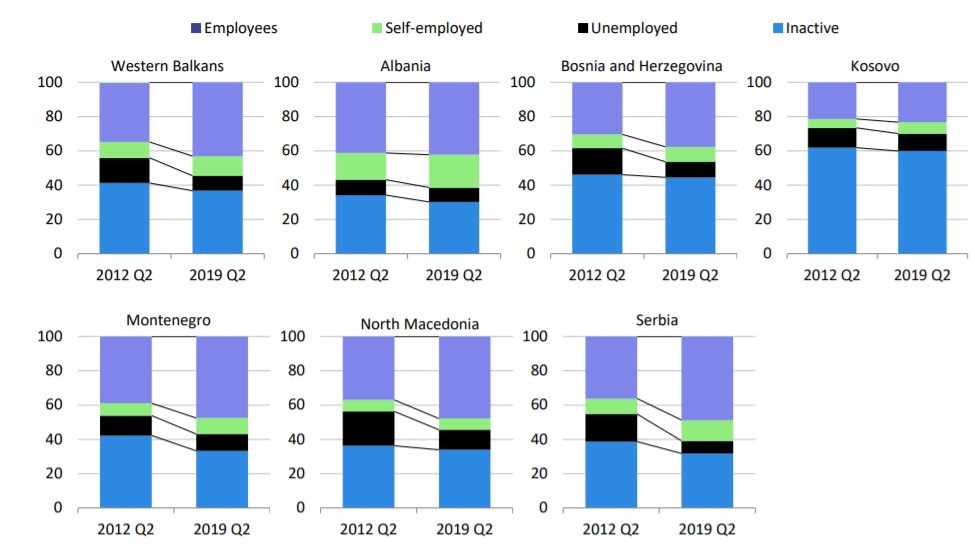 Structure of the working-age population (15-64) from 2012 Q2 to 2019 Q2, change in % Source: SEE Jobs Gateway Database, based on data provided by national statistical offices and Eurostat.

According to the WB DESI 2019 Market Report, there is a gap between digital skills in the EU and the Western Balkans. This gap should be tackled since the need for these skills is increasingly in demand.

One of the key factors for improving the number of workers capable of keeping up in a digitally-oriented environment is to increase the level of digital literacy on regional, but also on national and local levels.

Digital skills (known as ‘’new economy skills’’) and digital competencies are interconnected, but not the same. ”New economy skills” represent the skills valuable in the new, tech-driven economy. They include the basic tool-related skills, but also problem-solving skills, creativity skills, prolonged learning skills, and so on.

Digital competencies, on the other hand, are broader and defined within The European Digital Competence Framework. This framework is useful for self-assessment when it comes to the readiness to enter the digital-oriented labor markets.

To be digitally competent means that we have certain knowledge, skills, and developed attitudes that enable us to have creative and critical approaches towards technology use. Digital competencies help us develop skills that can be transferred to the wide range of situations needed for various job-types.

Are jobs disappearing or transforming

It can be argued that the change was forced on us when the digital revolution started.

The future of jobs is a burning topic, and many studies point at both positive and negative outcomes. Many tasks can indeed and will be replaced by the efficient use of computers and machines. Contrarily, some industries are dealing with the skills shortage.

The productivity gain is one of the main benefits of smart use of digital tools, hence, they are the advantage. Instead of higher unemployment rates due to digital advancement, we are actually witnessing structural change. It can be said that digitalization encourages transformation, and in the terms of job creation, it increases the demand for specialized professions. For example, with the rise of social media, besides the already existing marketing-related jobs, professions such as social media manager emerged.

When speaking about the lack of need for certain jobs in the Western Balkans, the WB Labor Market Trends Report 2020 states that automation threatens low-skill jobs and that the inequality will become even larger if we lack adequate policy actions. This is particularly referent for the people with lower education, youth, and people who don’t have or don’t seek new skills development on their jobs. It is concluded that automation will not erase the need for these jobs as such, but it will require re-skilling.

What was also found common for all of the countries of the Western Balkan is that there is a high percentage of workers who spend time doing ”routine-tasks”. Moreover, only a small number seek or engage in learning new skills. However, it is said that these numbers vary depending on the education level.

So, rather than fearing the disappearance of the already existing jobs, it can be said that the will to change our mindsets is a bigger challenge. The development of the right skills is the first necessary step for the digital transition, but also the capability to adapt to the rapid changes in the working environment. 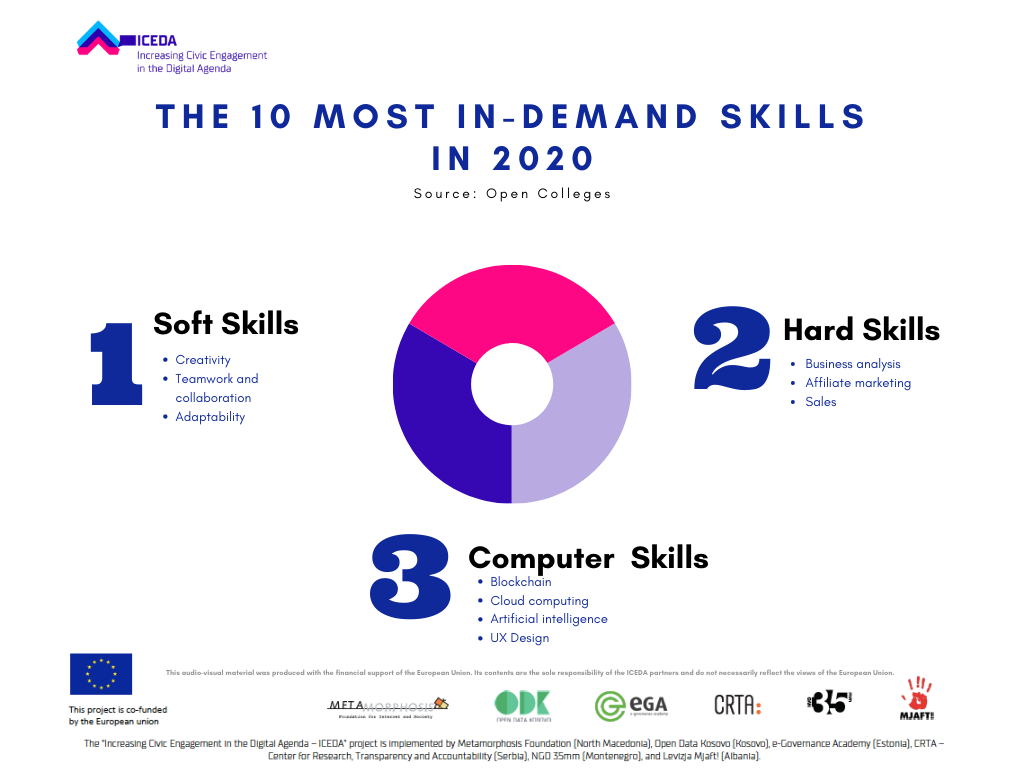 The need to adapt

One of the main characteristics of technology is that it evolves quickly. For employees, this means that there are constantly new situations to resolve and to constantly upgrade the already existing way of doing things.

Just as we need all these different tool-related skills, we need to develop the awareness and the readiness to adapt and upskill on a long-term scale.

One of the biggest challenges is to make this shift in our education system. Although we do have access to the online self-paced learning platforms, the ability to adapt and embrace the nature of the fast changes in the digital world should be available in both schooling and post-schooling systems in the Western Balkans.

It is no secret that the institutions in our countries lag behind with the policy responses when it comes to the marketplace changes. We often witness the disparity between the legislative and the practice.

Revamping and reforming skill formation is needed in the Western Balkans. Providing more learning opportunities for adults too. According to the research, a small number of companies provide training for their employees. Most of these existing training are oriented on on-the-job needs rather than helping workers to have the ability to deal with the challenges in the future.

On one side, we have a generation gap and a resistance to change due to a large number of long-term routine jobs, on the other, we have an educational gap that still lacks preparing youth for the challenges for the fast-changing labor market.

The company cultures along with the public sector in general recognize, but still don’t provide enough opportunities, nor space for skill upgrade of their employees. Many of those preparing to become a part of the working force need to develop the ability to adapt.

The most important concept that it seems has to be constantly introduced is lifelong learning, as it goes hand in hand with the mindset change that is needed in the Western Balkans.

The past year has drastically influenced the speed of the digital shift and the change in the working environment.

The remote work and flexible work methods were forced on us, and the focus of the work was changed from processes to the result-oriented pace. We witnessed a rapid development of software, applications, e-services, and increased need for IT professionals, while many traditional jobs were, and still are facing serious problems.

There is no precise answer whether more and more people will lose their jobs or not, but what is evident is that the people in our countries will have to show the will to transform the way they work and live, and rather than being afraid of losing skills, they’ll need to embrace new ones.

Digital literacy promotion, increased visibility of issues related to the Digital Agenda, and increased citizen demand for quality e-services are the main areas covered by the activities of the regional project ‘’Increasing Civic Engagement in the Digital Agenda – ICEDA‘’, that will directly influence on the level of e-readiness of the targeted Western Balkan countries.