Declaration of Openness, Accountability and Transparency of the Local Self-Government in North Macedonia 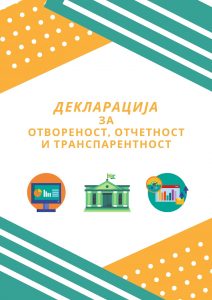 The openness of local self-government units is a key condition for democracy, which allows citizens to be informed, which in turn, is a necessary precondition for equal participation in political life, effective decision-making and accountability of institutions for the policies they implement.

In this regard, so far 31 local self-government units in the country have supported the Declaration of Openness, Accountability and Transparency of the Local Self-Government in North Macedonia, which pledged to follow and respect the principles and tenets of openness and take action to continuously improve its policies for transparency and citizen involvement in decision-making processes.

By signing the Declaration, they committed to making additional efforts to be more open to the citizens, to base the transparency on open data and information, to establish clear procedures for participatory decision-making, as well as clear procedures for obtaining public services, to accountably explain for what they used the public money at their disposal and how they improved the lives of all citizens and communities under their jurisdiction.

The Metamorphosis Foundation, within USAID Civic Engagement Project, will continue to provide support to municipalities in their efforts to improve transparency and openness, but will also continue to monitor the level to which municipalities adhere to the principles of openness and democratic governance.