At today’s press conference within the project “Digitalization in Agriculture – NOW” implemented by the Rural Coalition as part of the ICEDA small grant scheme, the results of the national report on digital literacy and use of e-services in rural areas were presented.

At the presentation of the results of the survey which included 246 respondents from rural areas, namely 122 women and 124 men from 6 planning regions (Southwest, Southeast, East, Northeast, Polog and Pelaognija) it was mentioned that as many as 76% of farmers have an e-mail address, over 92% have a stable internet connection in their place of residence, and 185 of the respondents have another computer device besides a smartphone.

“But what is worrying is that most often such e-mail addresses are not being used, they do not know their passwords and that often causes problems in communication with institutions. Therefore, as many as 64% of them prefer communication and retrieving documents over the counter and the trust in electronic documents is low, i.e. only 35% of the respondents trust the system completely. More than half of the respondents, i.e. over 52% do not recognize the portal www.uslugi.gov.mk and of those who have information about it, only 18% managed to open it and request a certain service electronically, usually with the support of the younger members of the family or with the support of the employees in the institutions”, mentioned Liljana Jonoski and Elizabeta Risteska-Mrceska as the main researchers in the project.

The main recommendations given in the research were confirmed at the press conference, i.e. that we must work in the field with farmers, step by step, starting from increasing the level of digital literacy, introducing e-services as the only way to communicate with institutions where it is possible and strengthen the awareness of the local population about the need for active involvement in the digitalization process which saves them time, money, but at the same time gives them a complete overview of the developments in the sector of agriculture and rural development. That is why these activities shall be conducted in easy, simple and understandable language for the rural population. 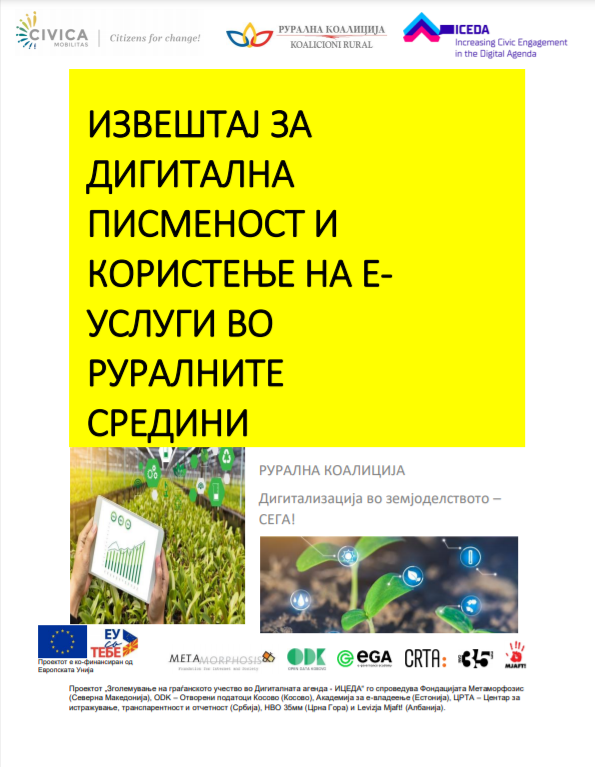 The research was conducted within the project “Digitalization in Agriculture – NOW” funded as a sub-grant within the project “Increasing Civic Engagement in the Digital Agenda – ICEDA” implemented by the Metamorphosis Foundation (North Macedonia), e-Government Academy (Estonia) ), Mjaft! (Albania), CRTA – Center for Research, Transparency and Accountability (Serbia), NGO 35mm (Montenegro) and ODK – Open Data Kosovo (Kosovo). The project is implemented with financial support from the European Union.

The Rural Coalition is one of the three organizations from North Macedonia that became part of the regional ICEDA Network – Network for increasing civic engagement in the implementation of the Digital Agenda, which is active not only in North Macedonia but also in Albania, Kosovo, Montenegro and Serbia.