Despite the fact that in North Macedonia there is a Platform for interoperability or interconnection, according to which state bodies, institutions and business companies should exchange data between them, this works partially. Changing the names of the streets, but not updating the registers, causes additional headaches for the citizens, where they are exposed to administrative procedures and have to wander between the counters to ask for “certificates” for which they spend money, writes Portalb.mk.

Behind the scenes of controversy over how to name city streets, municipal authorities carry out administrative procedures, often wrapped up in political circumstances or interests, which do not always end. This is exactly what causes bureaucratic problems, characteristic of our country which is slowly moving towards digitalization.

A typical example of the lack of interconnection of institutions electronically is the case of naming streets. The municipalities and the city of Skopje are obliged by law to have registers with the names of their streets and to update them, otherwise, a fine of 20,000 to 30,000 denars is provided for them.

For now, there is no evidence that municipal inspectors have issued payment orders.

According to the law, the change of street names must go through a process, which starts from the municipality, and with the consent of the Government ends in the Central Register, which then distributes the notification to the Ministry of Interior, the Statistical Office and the Cadastre.

Through the infographic below we will show the route for changing the name of a street. 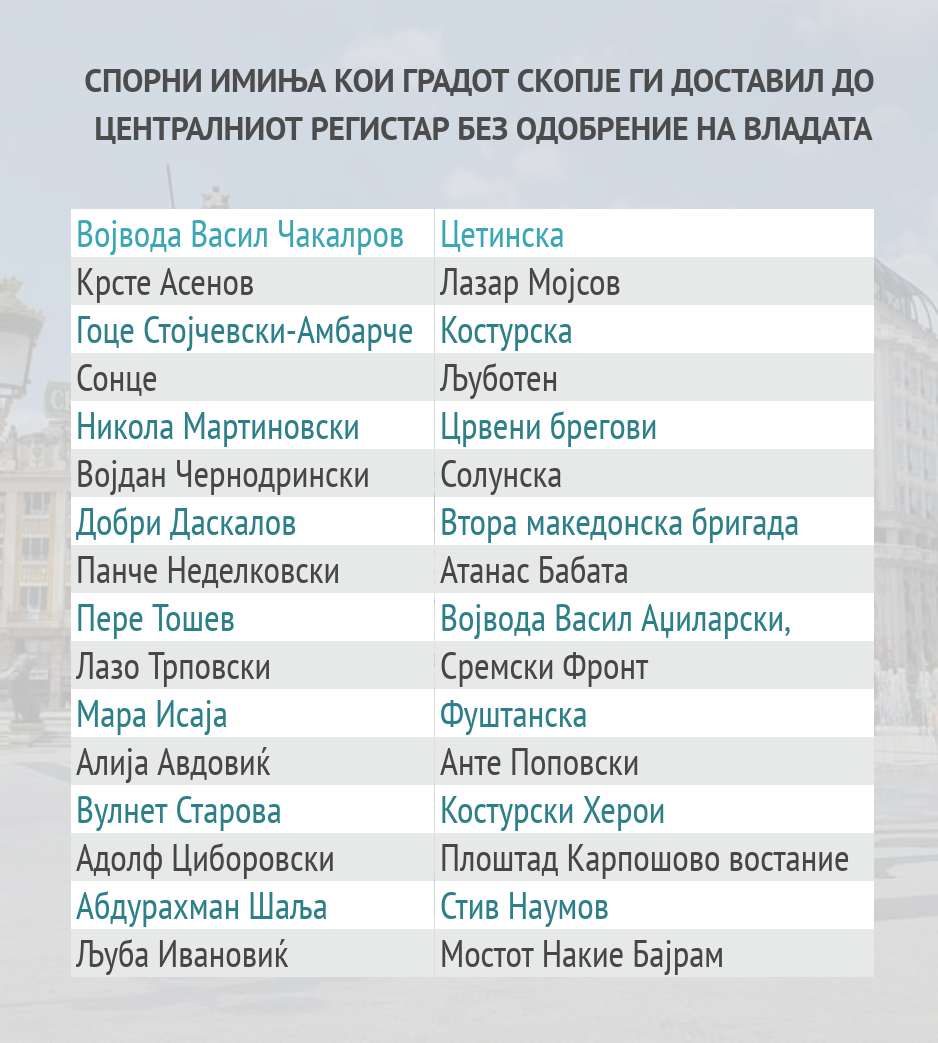 “When registering the application for registration, the Central Registry did not register part of the infrastructure facilities (it is about 30 infrastructure facilities), because they were not in the draft- list for which the Government of RNM gave consent. The competent persons of the City of Skopje were also informed about this”, says the Central Registry.

The Government says that the decision on the list of names was voted on March 9, 2021, at the 51st session of the Government, but the disputed names were not in the draft- list.

The new administration of the City of Skopje, headed by Danela Arsovska, says that the March decision of the City Council is illegal and that they are working with competent institutions to solve the problem.

“With this decision of the Council, the procedure for approving the changes has been violated, nor has the consent of the municipalities been given, which is necessary according to the law. The City of Skopje has already held a working meeting with the representatives of the Central Register and discussed solving the problem in the interest of the citizens. Due to the complex situation and the involvement and operation of many institutions, the City of Skopje will act within its competencies”, say from the City of Skopje.

Citizens pay for the lack of interoperability between institutions

The other side of the coin is that these changes force citizens to engage in bureaucratic procedures, with institutions asking citizens for “certificates” to prove that the street name they have in a particular document has been changed. The problem deepens because there are cases when a street name has undergone changes several times and the municipalities do not submit those changes to the Central Register or do not update their registers. Popularly speaking, the names are changed for populism, and the citizens then struggle to untie the knots of the administrative bureaucracy.

A citizen, for Portalb.mk, told about how she had to wander door to door for a service, which if the interoperability between the institutions was functional, would be easily overcome.

“After I went to the City of Skopje, I was informed that the city is not connected to the Cadastre, through interoperability,” the citizen told Portalb.mk.

This lack of interconnection creates additional problems in cases when the names of the streets are changed because if the citizens want to register their properties under the new name of the street, they have to hire themselves and pay for it.

The names of the streets are registered by the Agency for Real Estate Cadastre in the real estate property lists only based on submitting the legal basis issued by the competent authorities. According to the Cadastre, if the name and number of the real estate are not submitted, the space with the name of the street in the property list will be empty.

“The update of the new names of the streets is done in the procedure for maintenance of the real estate cadastre. The changes of the names of the streets in the property lists are made after the submission of the request by the natural and legal persons, to which is attached the appropriate legal basis issued by a competent body and proof of payment of the fee according to the tariff “, say from the Central Registry.

However, university professor Borče Davitkovski emphasizes that after the change of the name of the street, no confirmation should be requested. The Central Registry submits information to all authorities that the street name has been changed.

“In our country, according to the Law on Administrative Procedure, the bodies are obliged to collect all the documents themselves during the conduct of the procedure. This is mandatory, but they never do it and harass the citizens, and for example, if they go to the municipality, they force them to go from one counter to another to get documents. Of course, not every citizen has to go to the Cadastre to change the property list, go to the municipality, and send a “certificate” to the Cadastre. So the institutions should submit documents electronically to the Cadastre and this is where the whole thing should end, there is no need for the citizens to walk around or send confirmation,” said Davitkovski.

According to him, interoperability will be established only after a functional analysis that would precisely define the competencies of the institutions in order for several institutions not to deal with one issue, but to have only one competent institution.

“It has been announced for 20 years now that a functional analysis will be conducted, i.e. that the competencies will be differentiated between the administration bodies, especially the ministries. We establish bodies, but not competencies such as the establishment of MISA or the Ministry of Political Systems. You just need to do a functional analysis to avoid duplication. Interoperability will be done only after the functional analysis is conducted, i.e. to differentiate the competencies, to localize and then the interoperability will be required. Not like this. How to act when a number of institutions are responsible for one issue? Why should not only one institution be responsible for this matter? That is the functional analysis. For example, waters. In RNM the Ministry of Health, Agriculture, Transport and Communications, the Ministry of Environment, the inspectorates of the ministries and the communal inspectorates have competencies over waters. So we have 4-5 competent bodies, but still, our waters are much polluted,” he said.

“Confirmation” for identification documents, only when changing the house number

Identification documents and passports, i.e. ID cards or passports are valid until the expiration date, regardless of whether the street name has been changed. The Ministry of Interior, for Portalb.mk, explains that only if the municipalities change the house number, then the citizens must submit a certificate from the municipality.

“During the regular change of identification documents, ID card for example, if it is a matter of changing the name of the street, the citizen is not obliged to submit another document, except to write the street name on the ID card form. But, if the house number is changed by the municipality, then during the regular change it is necessary to submit a confirmation for change given by the municipality”, the Ministry of Interior says.

Unlike the Cadastre, the Ministry of Interior is linked to the Central Population Register, which includes, among other things, street and address registers.

“The Ministry of Interior is acting in accordance with the notifications submitted for changing the names of streets from the Central Register. The changes of the street names are registered in the electronic records of the information system of the Ministry and from that aspect, the citizens have no problem we have not received complaints from citizens about the inability to exercise the right to personal documents due to the street name.

We talked about the functionality of the interoperability platform in RNM with Iskra Belčeva, an expert from the Center for Change Management, an organization that continuously monitors the reforms in the administration.

“From the tests performed by some public sector services and the processing of some electronic services, we came to the conclusion that the Platform for Interoperability and External Data Exchange between institutions works only partially,” said Belčeva, explaining that this conclusion is based on testing of the scholarship service, but also on the service for electronic registration of students which is implemented for the first time this year.

As she says, the essence of the interoperability platform is not to need the exchange of documents, but only data (of citizens) that are quickly, easily and safely distributed electronically between institutions and in perspective with the private sector.

There are currently 42 institutions involved in the interoperability platform. Among them are the Central Register, the Cadastre Agency, the City of Skopje, ministries, inspectorates and a number of other institutions.

The digitalization of services, although necessary in Northern Macedonia is protracted and often hampered by bureaucratic issues of laws and procedures, while technological development and developed countries are “running” fast. While our institutions deal with “certificates, stamps and signatures”, advanced countries are building systems that facilitate citizens’ access to services, while saving time, effort and money.

The research of Portalb.mk showed that North Macedonia is 10 years behind the European Union in the field of digitalization. 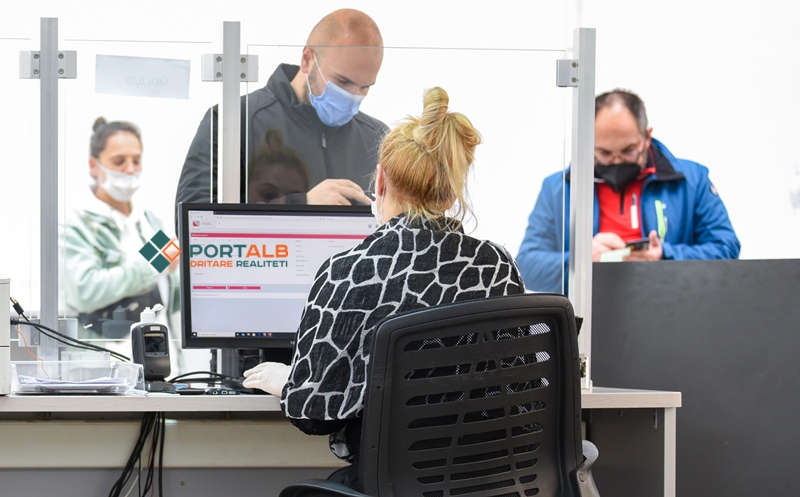