Citizens need to look everywhere for the employees of the Offices for Contact with Citizens, who only work for certain hours, to ensure communication between the MPs and the citizens. Portalb.mk visited 4 offices in different locations – Tetovo, Čair, Karpoš and Šuto Orizari, to see how they function up close. According to what we saw in the field, the mentioned offices do not respect the working hours, while some do not even answer phone calls. Citizens have a hard time contacting the representatives of the MPs, who should listen to their problems and needs, in order to then submit them to the Assembly to find a concrete solution.

How do they work?

The offices should be open to all questions, proposals and initiatives that arise from the citizens and are in the competence of the MPs of the RNM. With the amendments to the Law on the Assembly from 2010, the work of these offices with the citizens is part of the legal obligations of every MP in the Assembly.

The functioning of these offices is regulated according to Article 36 of the Law of the Assembly, according to which the Assembly, in cooperation with the local self-government units, provides appropriate conditions for the MP’s contacts with the citizens in his constituency.

“(2) Every last day of the working week (Friday) is determined as a day for the contact of MPs with citizens and voters in electoral units. (3), on the day specified in paragraph (2) of this article, as a rule, the Assembly does not hold plenary sessions, sessions of working bodies and activities of parliamentary groups for cooperation with Assemblies of other countries, except in urgent situations.”, it is said in paragraph 2 and 3 of Article 36.

An interactive map has been published on the website of the Assembly, which shows 34 locations, with the data for the respective offices. The description of the office contains information about the name of the party, the MP, the contact person, the phone, the working hours and the address. According to our check, all offices have detailed descriptions.

However, experts assess that there are no qualitative and quantitative reports on the effects of these meetings.

“MPs are obliged every last day of the working week to be in contact with their electorate, through physical presence and access to the local self-government unit from which they were elected for the parliamentary position. Information on contacts and locations of local citizen contact offices is also available, but there is no qualitative or quantitative report on the effects of these meetings. The “My MP” report should also contain information on the number of meetings the Member of Assembly has had through the office for contact with citizens, the questions that citizens have asked and whether any action has been taken in relation to the problems that citizens have raised with their Member of Assembly – it is said in the “Metamorphosis” publication, based on the results of 2021, “Assessment of good governance in North Macedonia and the region through the Openness Index”. This report recommends that the Assembly improve communication with citizens and increase trust in this institution.

On September 19 after 1 pm, the Portalb.mk journalist visited the office in Tetovo but found closed doors. The journalist contacted the employee and she indicated that she left work a little early for personal reasons, but that the office is open every working day from 9 am to 2 pm.

The journalist visited the office again the next day, on September 20, around 9:30 a.m., and this time the employee was in the office.

According to the employee, citizens mostly come for employment, but it often happens that they come and ask about things that are not in their competence, that is, about various municipal issues.

On September 21, from 9:30 a.m. to 10 a.m., the Portalb.mk journalist visited the office located in the Čair Municipality building. There was no information board in front of the office stating that the corresponding office is for citizens’ contact with the MP.

Portalb.mk tried to contact them through the phone number. One did not answer the phone call at all, and the other said that he has not been employed there since March but works in another institution, and the Assembly has not deleted his data from the website. In his place, there was an employee from another political entity, but there was no official information about them on the website of the Assembly and we were unable to find a contact.

Some of the employees of Chair municipality in an informal conversation with the Portalb.mk journalist say that the office does not work regularly and they do not know what is happening with this office.

The Portalb.mk team was in this office on September 21 around 10:30 am.

Despite the fact that this office should have been opened at that moment, its doors were closed.

An additional problem with this office is its location. It is located on an overpass, where the elevators do not work. Thus, it is inaccessible to people with disabilities. 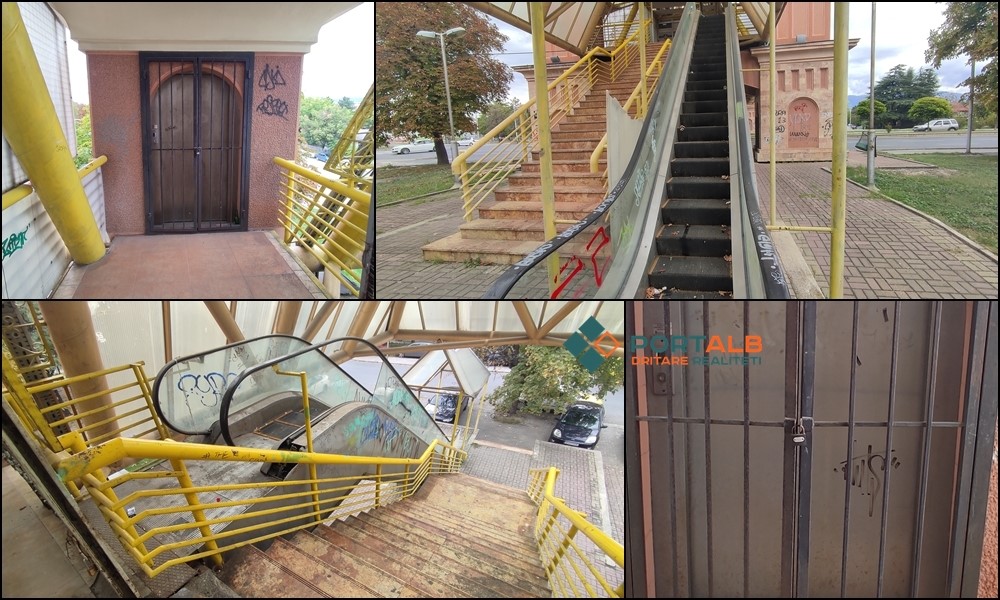 On September 21, around 12:30, the Portalb.mk team was in the Municipality of Šuto Orizari, to visit the office, which should work from 9 a.m. to 2 p.m.

Some of the employees in the municipality of Šuto Orizari said that the Office is located in the premises of the municipality, but they did not allow the Portalb.mk journalist to photograph it.

In an informal conversation with some of the employees in the Municipality, they indicated that they have no contact with the responsible person from the Office and do not know where they are and when they are coming in, because they have not seen them for several weeks.

Portalb.mk tried to contact this person through the phone number published on the website of the Assembly, but the employee’s phone was switched off.

“The Assembly continuously prepares and takes steps in cooperation with the local self-government units (LGUs) and the Government of North Macedonia to ensure spatial conditions for the opening of the remaining offices in accordance with the law,” the RNM Assembly told Portalb.mk.

According to the data of the Assembly, out of 75 approved offices, in the period from 2018 to 2020, 46 offices were opened, while in the current parliamentary composition (2020-2024) until September 1 this year, 49 offices were opened. 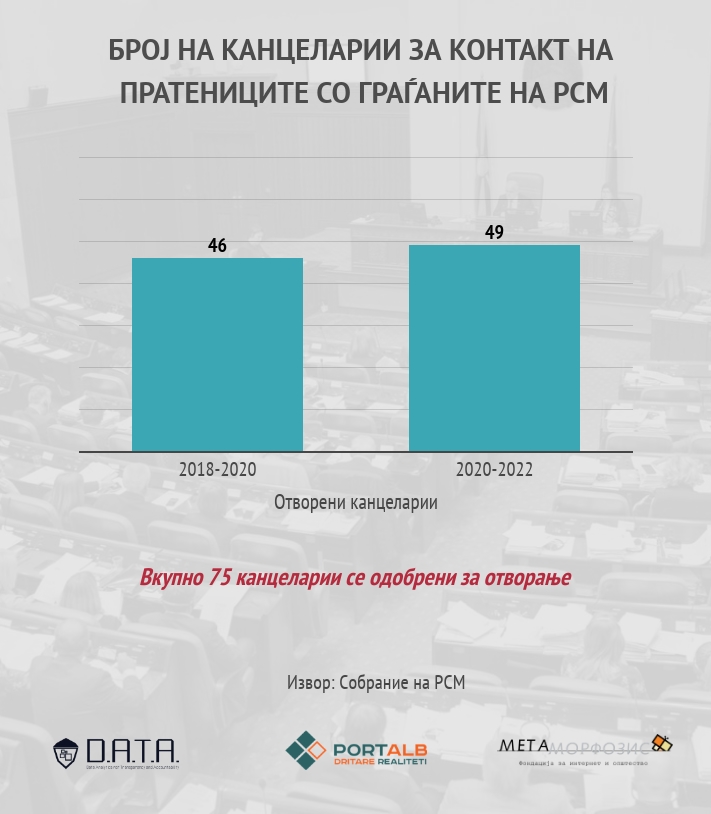 The data provided to us by the Assembly show that from 2018 to September 2022, more than 16,000 visits were registered in all offices in the country, 5,000 cases were resolved, 460 questions were submitted for MPs, 146 civil initiatives were launched in the Assembly and 3,603 were registered events for citizen involvement. 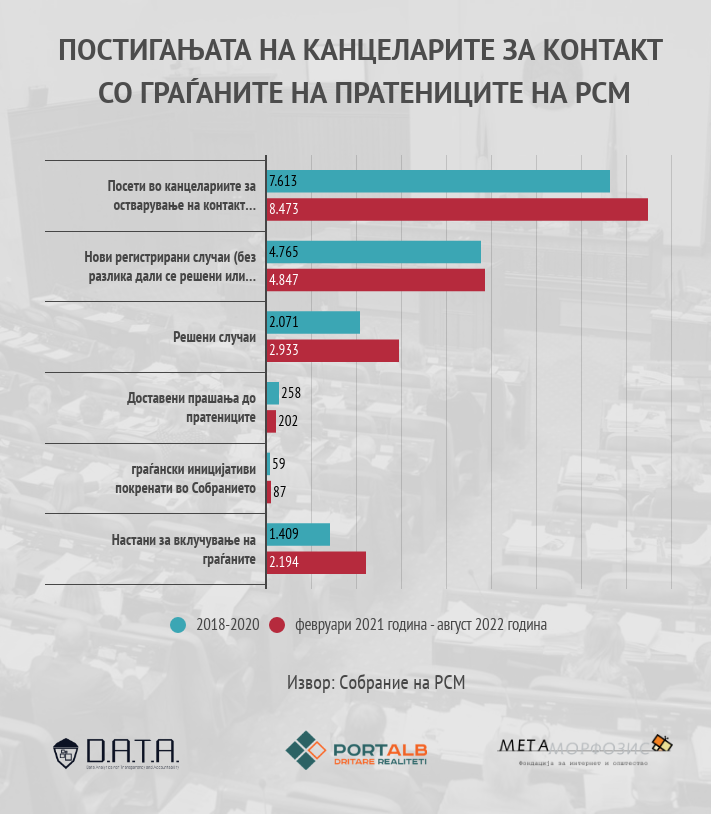 The Assembly did not explain the way of incorporating the proposals into the decisions of the Assembly.

MPs were inconsistent during citizens’ visits

The head of the Center for Assemblyary Support and Democratization at the Institute for Democracy “Societas Civilis – Skopje (IDSCS), Vlora Rechica, who has been observing the work of the Assembly of North Macedonia for years, says that the deputies are not regular in fulfilling their legal obligation to meet with their electorate once a week, that is on Fridays.

“Unfortunately, no (they do not come regularly). First, not all MPs have their own local offices in the constituencies they come from. Second, due to the lack of a parliamentary calendar, where Assemblyary sessions would be scheduled several weeks in advance, it often happens that on Fridays MPs are in the Assembly in Skopje, instead of in their local offices. Both problems are solvable, if there is a will for reforms in the Assembly regarding the parliamentary calendar and if all Assemblyary offices are activated,” says Rechica.

According to the survey, Rechica explains that citizens prefer direct forms of contact with their MPs. The largest percentage of respondents (26%) believe that MPs should inform the citizens of their region through meetings with citizens in public places. 21% think that they should be informed through the media, 18% through meetings in the MPs’ offices, and 17% think that the MPs should do it through public appearances. 15% consider that social networks are a suitable channel for informing citizens.

Her proposal is to have even more offices than there are currently.

“All offices for contact with citizens should definitely be activated, and Friday should be reserved exclusively for this activity. In addition, MPs can be creative and organize public tribunes and meetings with citizens where they will listen to their problems, proposals and ideas,” Rechica adds.

Citizens believe that the Assembly is closed

According to the survey of the Institute for Democracy on the citizens’ perception of the work of the Assembly within the framework of the Parliamentary Support Program (PPP), more than half of the respondents (59%) believe that the Assembly is completely or partially closed to the public, which is an increase of 4 percent compared to 2021 (55%), that is, 10 percentage points compared to 2020 (49%). This perception, says Rechica, is due, among other things, to the closing of the Assembly to the public due to the Covid-19 pandemic and the need for protective measures that limit citizens’ participation in the work of the Assembly only via the Internet.

Almost half of the respondents (54%) believe that MPs are closed to the comments of the public and civil society organizations during the preparation of laws. Of these, 28% believe that remarks are rarely included, while 26% believe that they are completely ignored by MPs.

According to the research of the International Republican Institute conducted in November and December 2021, only 3% of the citizens of North Macedonia have confidence in this institution. 27% of respondents “somewhat” trust the Assembly, while 33% “do not trust it to a large extent”.