“Debate on digitalization: There is a basis for fully electronic services, but much remains to be done” – Meta.mk News Agency

For fully digital services for the citizens, it is necessary to provide the proper technical and personnel solutions, to adopt additional legal changes and bylaws, and although now the basis for digitalization is laid, much remains to be done for its successful completion and for it to become a real service to the citizens that will make their lives easier and will fully meet their needs. At the same time, great care must be taken to find solutions that will be sustainable, i.e. permanent, unlike some examples from the past or from now, when the introduced digital services are currently not available or are only partially implemented, so the citizens still have to go to the counter and get or submit documents, said the participants in today’s debate “Delivering digital services created for the citizens.”

The event, organized by the Friedrich Naumann Foundation for Freedom, the Metamorphosis Foundation for Internet and Society, and the Institute for Social Sciences and Humanities – Skopje, was held with physical presence and could be followed through the Zoom platform and Facebook, and brought together representatives of the civil society working in the field of digital services and representatives of the Government to discuss what has been done so far, what are the mistakes that should not be repeated, and what are the best solutions to achieve the goal of providing quality digital services, which is an integral part of the Government’s Digital Agenda, which is in fact a major reflection of the EU Digital Agenda.

Digitization trots, there are more bad examples than good

“The topic is important for every country, because digitalization is not the future, but the present. When we talk about the digitalization of the government, of the public services, we should know that it has a positive direct effect not only on the functioning of the state, but on all social processes and the development of society.” Any slowdown in this plan leads to a slowdown in all processes,” said Ivaylo Conev, Project Coordinator for Bulgaria and North Macedonia at the Friedrich Naumann Freedom Foundation.

Qendresa Sulejmani, Program Director of the Metamorphosis Foundation for Internet and Society, and Iskra Gerazova-Mujcin, a researcher at the Institute of Social Sciences and Humanities – Skopje, presented both studies on citizens’ experiences and requests for digital services, as well as the directions in which they should direct the implementation of digitalization.

As Sulejmani pointed out, the survey of citizens for electronic services at the municipal level found that it is more important for citizens to receive at least clear information in digital form, than to offer digital services that in reality still do not work well. Metamorphosis’s research covered 12 services.

“The municipalities of Kriva Palanka and Delchevo are good examples of municipalities based in the city that offer up-to-date and stable digital services and the citizens are satisfied, and in terms of the municipalities based in the village, the municipality of Debarca is a good example. It is interesting that 95% of the citizens we surveyed said that they are satisfied with only clear information, without offering a full digital service, rather than having services that are not stable – that is, they may be ideal, but not well implemented. Such is the example of “See, report, fix”, which is a great solution, but the municipalities have stopped using it. It is a good example of how citizens lose confidence in e-services even before they exist. In our research, many citizens say that it is more efficient to spend half a day at the counters and get the work done, than to try online “, explained Qendresa Sulejmani presenting the research”Analysis of e-services in the municipalities in the Republic of North Macedonia “.

Iskra Gerazova – Mujcin, talking about the research „Digitalization as a path to true citizen-oriented administration: decentralization of processes as means of accelerated and effective reform“ emphasized that they mainly researched the services connected to personal documentation. The big problem here is that the administration either does not know or does not want to implement the laws, because the citizens are still required to provide documents that the administration has to obtain ex officio.

“We have researched the laws and bylaws that refer to personal documentation, and the first impression is that there are a lot of regulations in them that in some way burden the citizens and are in favor of the administration. The Law on General and Administrative Procedure in Article 63 states that accompanying documents for a service, if not submitted by the citizens, will be procured by the institution. So, it is said that the institution can procure them, but requires them from the citizen. “As for the laws on personal documentation, although since 2019 some of them have undergone changes and additions, none of them are in line with digitalization, in almost three years, none has been adapted,” said Gerazova-Mujcin.

Both equipment and software are essential, but also money

Perceptions and recommendations for what has been done so far and what should be realized in the future, in the discussion were given by Zoran Dimitrovski, Deputy Minister at the Ministry of Local Self-Government; Ana Malceva – Marinkovic, Cabinet Officer for coordination of the cooperation of the Prime Minister with state bodies, public enterprises, institutions, companies, citizens’ associations and other legal entities; Iskra Belcheva – Ristovska, Program Coordinator at the Center for Change Management; and Mila Josifovska-Danilovska, Manager of the Social Accountability and Human Rights Online Programme at the Metamorphosis Foundation for Internet and Society.

Deputy Minister Dimitrovski also sees illogicalities in the current situation, but believes that the fact that the government has set digitalization as a top priority gives optimism that things can be fixed.

“Before each Government session there is an update on the level of implementation of the process. We are now talking about July 2022 as a final period of digital transformation. But we should also pay attention to this process, because in the past we had an E-government, then a one-stop shop system, initiatives to facilitate services for citizens and it faced problems in the field, and in the end there are services that we received digitally, here, from the Registry Office, for example, you can apply digitally, they make an appointment to bring you physical documents, and that process is not facilitated, but complicated. The digitalization process must take into account sustainability, software support, public servants… We know how our bureaucracy, i.e. administration behaves when issuing documents, we have seen that with the Ministry of Interior with the ID cards and passports, and the digitalization process can be more complicated if sustainability is not taken into account. And the Government must do the budgeting right now in the Digital Agenda for hardware, software, management, it all requires funds. Many municipalities complain that they can not enter the process of digitalization, because they do not have the finances and the government should consider block subsidies for that purpose,” said the Deputy Minister of Local Self-Government.

Ana Malceva-Marinkovic from the Prime Minister’s Office stressed that digitalization also contains elements of the fight against corruption, for a better and greener life of the citizens – in terms of reducing the used paper, but also in terms of the interests of the citizens. Three working groups are currently working on the realization of the Digital Agenda, she said.

“We are currently making a digital replica of all our physical interactions, and what we especially had in mind when developing a new system is to avoid the principle of the roaming of citizens on different digital platforms, but have it all centralized in one point of communication. On December 16, 2019, we established the National Portal for Electronic Services, and it was promoted, but due to the epidemic, its use declined. Otherwise, currently in the Government three working groups for digitalization have been formed: one for amending 150 laws, a working group of engineers coordinated by MISA and the third for digitalization of the judicial system, all of which are in close coordination. In terms of where we want to go as a country, July 2022 is undoubtedly the key date and I hope we will achieve it. Now there are many laws in government procedure, a plethora of legal interventions, and the goal is not to “rape” the legal system, but to intervene in the most minimal way to ensure legal certainty,” said Malceva-Marinkovic.

Regarding the security and the rights of the citizens, Mila Josifoska-Danilovska from Metamorphosis mentioned the respect of the latest version of the Law on personal data protection as especially important. Regarding the digitalization, she said that the citizens should be consulted in which order to digitize the services, but also to provide the infrastructure for the citizens’ access to digital services. 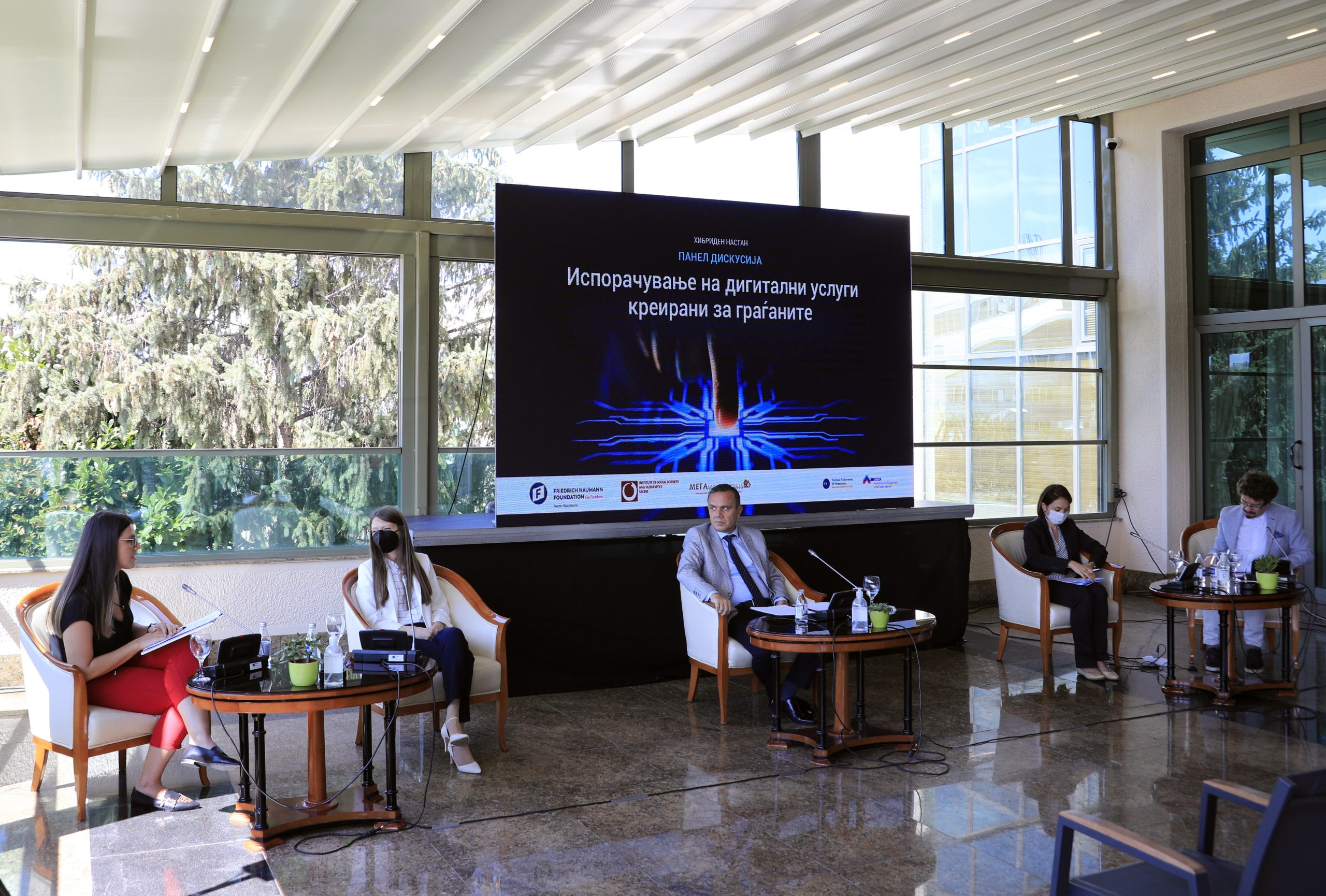 Within the project “Increasing Civic Engagement in the Digital Agenda – ICEDA” which is co-founded by the European Union and implemented in 6 countries (North Macedonia, Serbia, Kosovo, Montenegro, Albania and Estonia), Metamorphosis…

ANNOUNCEMENT for Panel Discussion: Delivery of digital services created for the citizens

Digital transformation: learning to live with the change