ICEDA Training for media, media workers and freelance journalists on topics related to the Digital Agenda for the Western Balkans

On 18 January 2021 (Monday), the Metamorphosis Foundation for Internet and Society organized a one-day training (webinar) for media, media workers and freelance journalists on topics related to the Digital Agenda for the Western Balkans. The Digital Agenda is an initiative developed by the European Union, which has also been expanded and adopted for 6 countries in the Western Balkans. It aims to ensure that citizens in the region make full use of the benefits of digital transformation. Commitment to the Digital Agenda will provide citizens with the skills to meet the demands of the new economy and will help modernize public administrations, strengthen computer security, increase connectivity, and improve the business climate.

The main goal of the training was to introduce media, media workers and freelance journalists) to ICEDA and topics related to the Digital Agenda for the Western Balkans, as well as to facilitate networking and cooperation in achieving the goals arising from it, through the ICEDA project.

The general conclusions of the training were that in order to substantially promote and educate on the key issues related to the Digital Agenda and the challenges arising from it, the cooperation with the media together with the civil society and institutions must be strengthened. Cooperation should be established with the media that have higher viewership/readership, the so-called “mainstream” media, in order to raise to a higher level the issues and challenges that citizens face in terms of using e-services. The conclusion was that on the “mainstream” media platforms should be placed educational campaigns in different formats (videos, visualizations, animations, etc.) adapted to the register of communities, so that all citizens (to be understandable for them) be provided with the opportunity to be informed and educated about the digital processes that affect them. It was emphasized that local media should be involved in such processes because they can more easily reach the citizens in the regions they cover in the media.

The training is part of the project “Increasing Civic Engagement in the Digital Agenda – ICEDA” which is co-funded by the European Union and is implemented in 6 countries (North Macedonia, Serbia, Kosovo, Montenegro, Albania and Estonia). The project is implemented by the Metamorphosis Foundation (North Macedonia), the Academy of e-Governance (Estonia), Levizja Mjaft! (Albania), CRTA – Center for Research, Transparency and Accountability (Serbia), NGO 35mm (Montenegro) and ODK – Open Data Kosovo (Kosovo). The project is being implemented with financial support from the European Union. 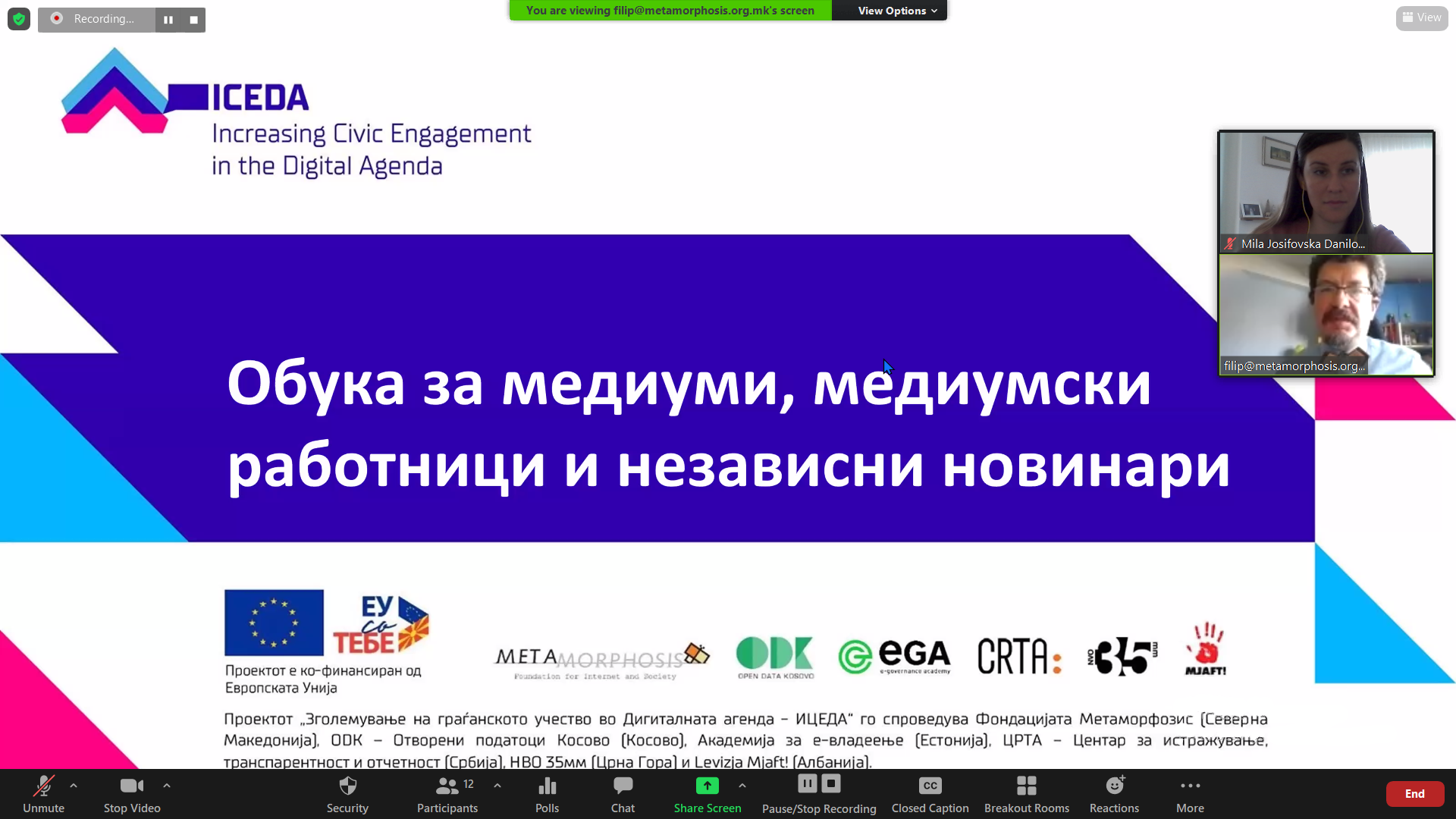