The research on the degree of openness of institutions in six countries from the region, conducted within the framework of the project ACTION SEE – Accountability, Technology and Institutional Openness Network in SEE, implemented by the Foundation for Internet and Society Metamorphosis, showed that municipalities in the Republic of Macedonia have a score of 34% under the index of openness.

This research covers the principles of transparency, accessibility, integrity and effectiveness, and according to these principles, municipalities in the Republic of Macedonia have the lowest rank compared to the other countries in terms of the indicators on accessibility, i.e. municipalities scored 27% of the indicators. These indicators refer to providing and adhering to the procedures of free access to information and enhancing the interaction with citizens.

The low score regarding the index of accessibility on the part of the municipalities is affected by their insufficient interaction with the citizens via social networks, non-publication of monthly newsletters for the work of municipalities as well as the lack of public debates for the citizens that would address issues of local importance, non-publication of public consultation plans concerning the municipal policies and the minutes from meetings with citizens.

The principle of transparency includes publication of organizational structure information, operational budget and publication and access to information on public procurement procedures. In order to improve transparency, Macedonian municipalities, which have a score of 35% under the index of openness, must make every publicly funded activity public, whereas information on such activities must be equally and easily accessible to all citizens.

Taking into account that municipal activities are closely linked to spending of public money, municipalities must thoroughly enhance their accountability in the future when it comes to this part, i.e. they must publish public procurement plans, decisions, contracts, annexes to contracts as well as other municipal expenditures.

Municipalities have a score of 49% under the index of transparency, in the subcategory budget transparency. Large number of municipalities publish the adopted budgets and the final accounts but in protected .pdf formats, which makes them difficult for browsing.

Also, the score percentage regarding the index is affected by the non-publication of Civic Budgets on the part of municipalities, such as midyear reports on the budget spending.

Besides the fact that the state prioritized open data on local level within the framework of the initiative Open Government Partnership, the research showed that the municipalities scored only 8% of the indicators on open data.

Taking into consideration the notable discrepancies which exist between the municipalities in terms of fulfilment of the indicators on transparency, the need for coordination and establishment of certain goals which would be common for the municipalities and which would represent minimum standards of openness is obvious. Such standards are not supposed to mean uniformity of municipalities, but establishment of guaranties for providing minimum openness conditions. In order to achieve this, the Community of local self-government units must increase its role and must take initiative.

The analysis of the openness of the local self-government in Macedonia and the region is an activity within the framework of the project ACTION SEE – Accountability, Technology and Institutional Openness Network in SEE, implemented with financial support by the European Union. 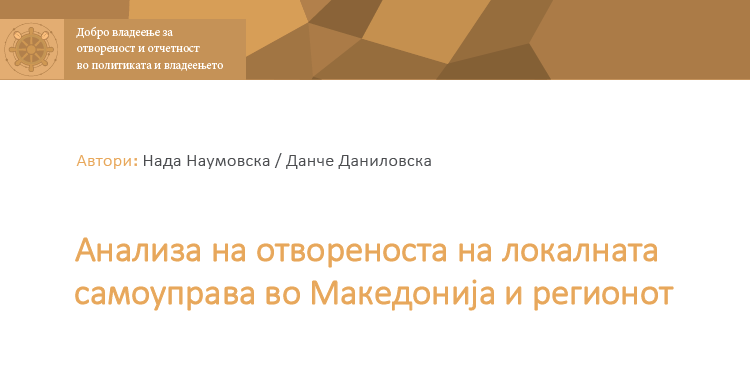