Openness of courts and public prosecution offices in the region is at unsatisfactory level, the research on the level of openness of judicial bodies in the region, conducted in six countries within the framework of the project ACTION SEE – Accountability, Technology and Institutional Openness Network in Southeastern Europe, implemented by Metamorphosis Foundation for internet and society, has shown.

On average, courts in the region have a score of 48% under the indicators on openness, whilst the public prosecution offices have a score of 40%. Courts and public prosecution offices must have an independent position in the system in power and in their work, they must adhere to the basic principles: impartiality, accountability, efficiency and transparency.

Courts’ transparency is an element of high importance which contributes to judiciary’s independence, and the transparency in terms of performance of courts and publicity of court proceedings can contribute to increased citizens’ confidence in the judiciary.

Regarding the principles of transparency, accessibility, integrity and effectiveness, which served as baseline for this research, courts have the lowest score under indicators on transparency, standing at only 33%, including indicators on publication of information on organizational structure, operational budget, and publication and access to information on public procurements. In order to improve their transparency, Basic Courts need to publish annual operation reports on their respective websites, which was duly observed as major shortcoming under this research. Great deal of Basic Courts have failed to publish and/or upload said reports, which affected their low scores under indicators on transparency.

Openness of public prosecution offices in the Republic of Macedonia

Analysed in terms of categories, basic public prosecution offices have a defeating score of 1% under indicators on transparency, as they do not have own websites where they would publish data such as: current strategies, operation programmes and plans; annual reports; competences; organograms; staff members, including name and surname, and salary brackets of public prosecutors; etc. Said categories of information, with the exception of annual reports, are not uploaded on the website of the State Prosecution Office as well.

Public Prosecution Office of the Republic of Macedonia

Average score of 51% calculated for the Public Prosecution Office under the indicators on openness is higher, but it is still unsatisfactory. This prosecution office has the highest score under accessibility, i.e. access to public information – 75%, while its lowest score is noted under transparency – 37%. In spite of the fact that this office is the highest body within the prosecution service hierarchy before which basic and higher prosecution offices are held accountable and should therefore serve as example, it has failed to publish any information related to its budget and is therefore assigned a score of 1% under these indicators.

Remarks of the European Commission presented in its last country report are serious[1], and underline the need for urgent efforts for reforms at judicial bodies.

The analysis of openness of judicial bodies in the region and Macedonia is an activity within the framework of the project ACTION SEE – Accountability, Technology and Institutional Openness Network in Southeastern Europe, implemented with financial support by the European Union.

[1] European Commission’s 2016 Country Report for the Republic of Macedonia, https://ec.europa.eu/neighbourhood-enlargement/sites/near/files/pdf/key_documents/2016/20161109_report_the_former_yugoslav_republic_of_macedonia.pdf, page 13 and 54. 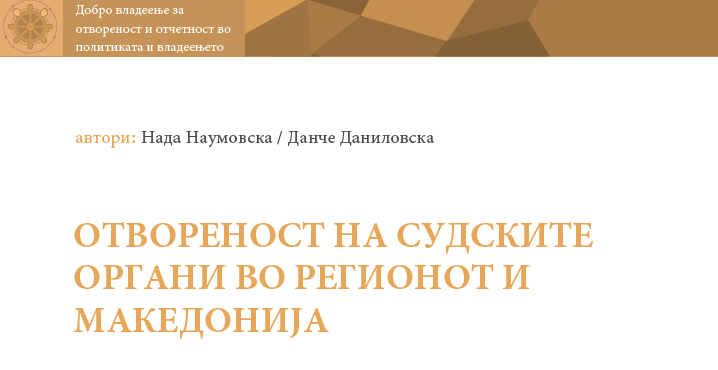 Following a series of consultative meetings of the Working Group on Creating the Transparency Strategy of the Government of the Republic of North Macedonia, on 19 November 2019, at the 166th session of…

Any cookies that may not be particularly necessary for the website to function and is used specifically to collect user personal data via analytics, ads, other embedded contents are termed as non-necessary cookies. It is mandatory to procure user consent prior to running these cookies on your website.