Regional Dialogues for the Digital Agenda: Artificial Intelligence and Algorithms in government e-services 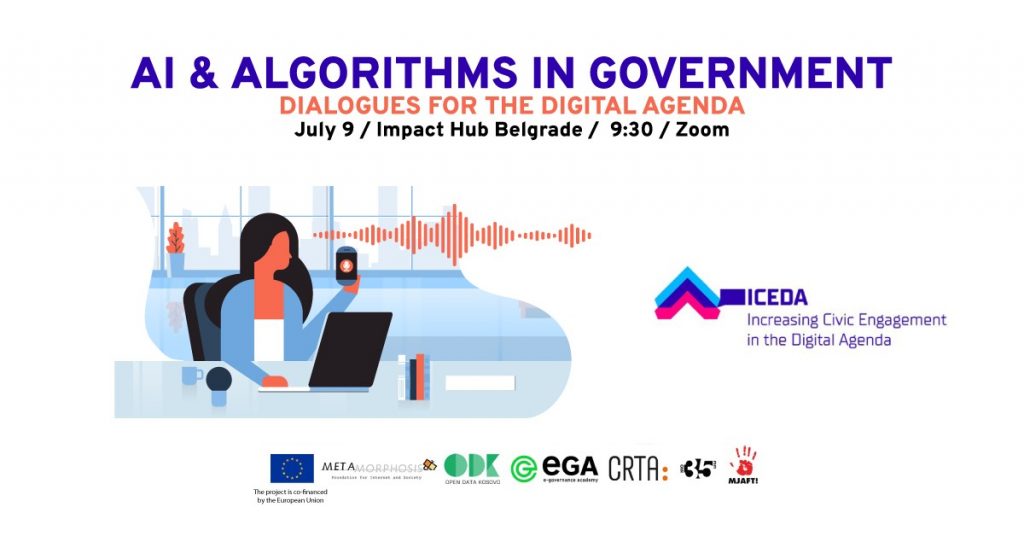 Within the project “Increasing Civic Engagement in the Digital Agenda – ICEDA”, CRTA – Center for Research, Transparency accountability (Serbia) together with Metamorphosis Foundation (North Macedonia) and the partners is organizing a regional event “Dialogues for the Digital Agenda: Artificial Intelligence and Algorithms in government e-services”. The event will take place on 9 July 2021 (Friday) in Impact Hub Belgrade at 09:30 – 12:10, and will also be open to the public via ZOOM and Facebook Live Streaming.

The event is designed to spread knowledge between regional leaders and initiate discussions and productive dialogue about the opportunities and challenges of using artificial intelligence (AI) for public service purposes. The trend of algorithms doing tasks instead of humans is also increasingly part of government operations, even in the Western Balkan countries. Algorithms “secretly” run many processes in the background, most often without any understanding of it by a wider citizenship, which brings in tremendous efficiency. It can, however, be risky because algorithms can be biased, even harmful, and accountability frameworks are often missing. Thus, the event will also be exploring the algorithms in government and government e-services in Serbia and the Western Balkan region.

The event is open and is expected to be attended by representatives of institutions, civil society organizations (CSOs), media and all other stakeholders. The event will take place in English language, primarily, but translation in Macedonian, Albanian, Serbian and Montenegrin is provided for the participants following the event via ZOOM. All interested parties are invited to fill in the registration form: https://forms.gle/k4WUxJwpxVkKGi7f6

The project “Increasing Civic Engagement in the Digital Agenda – ICEDA” is implemented by the Metamorphosis Foundation (North Macedonia), the Academy of e-Governance (Estonia), Levizja Mjaft! (Albania), CRTA – Center for Research, Transparency and Accountability (Serbia), NGO 35mm (Montenegro) and ODK – Open Data Kosovo (Kosovo*). The project is being implemented with financial support from the European Union.

* This designation is without prejudice to positions on status, and is in line with UNSCR 1244/1999 and the ICJ Opinion on the Kosovo declaration of independence. 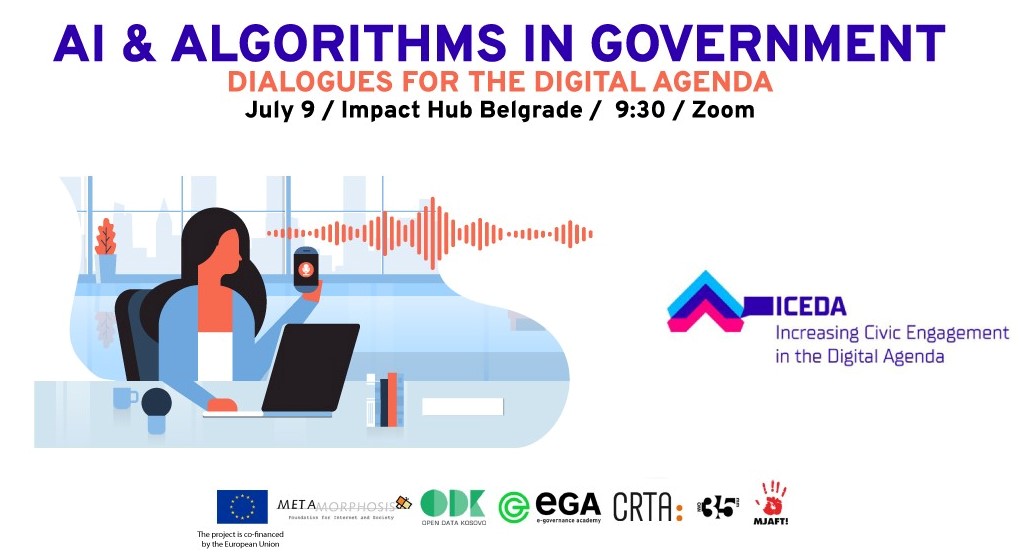