The Advisory Group of Experts met with the ICEDA partners today

The Advisory Group of Experts (AGE) of the project Increasing Civic Engagement in the Digital Agenda – ICEDA, co-funded by the European Union, met with the ICEDA partners today in order to hear about the progress of the project and network, and their strategy until the end of the project. The obtained achievements from the first year in project implementation were also discussed, as well as the challenges that the project team and network have faced. 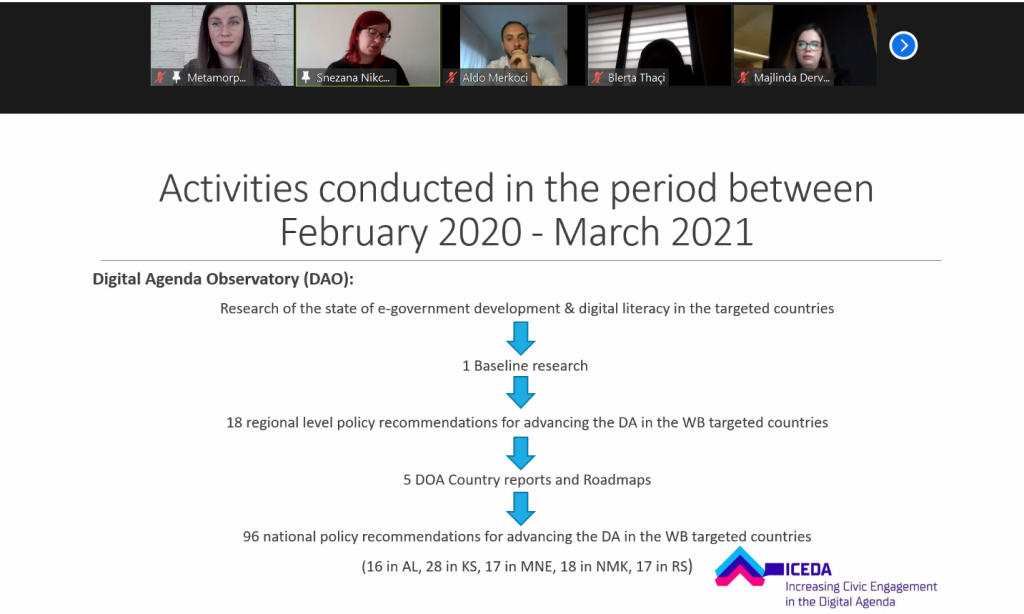 The meeting was attended by the project team from the 5 targeted Western Balkan countries, members of the Steering Committee and the AGE members.

The Advisory Group of Experts (AGE) is a regional multi-stakeholder body created for the purpose of providing advice on the general strategy for ICEDA project. The AGE consists of government representatives who are directly involved in the implementation of the Digital Agenda related matters within their institutions. The purpose of forming the AGE was to obtain input and guidance during the implementation of the Action that will help the ICEDA partners achieve their objectives in each of the countries respectively.

The AGE is foreseen to meet a couple of times throughout the project, to hear reports on current plans and activities, and to hear from the Steering Committee about their views on these and on future priorities and key issues.

The AGE is composed of 5 members from WB institutions, the majority of which were present at the meeting or representated by their deputies, namely: Mr. Lorin Ymeri, Executive Director of the Agency for the Delivery of Integrated Services Albania – ADISA (Albania) represented by Mr. Ili Sado from ADISA, Mr. Agim Kukaj Head of the Department for ICT at the Ministry of Economy, Employment, Trade, Industry, Entrepreneurship and Strategic Investment (Kosovo) joined also by Ms. Fjolla Restelica Ahmeti from the same institution, Ms. Bojana Bajić, General Director of Department of Digitalization and Information systems at the Ministry of Finance and Social Welfare (Montenegro), Ms. Elena Manceva, State Secretary at Ministry of Information Society and Administration (North Macedonia) and Mr. Milan Dobrijević, Head of the department for Digital Agenda development at the Ministry of Trade, Tourism and Telecommunications (Serbia) whose substitute was Mr. Slobodan Makrovic, Digital Advisor at UNDP Serbia. The members were selected based on their specialist knowledge, ability to represent the interests of the co-applicants and ability to help resolve issues the project may face. When determining the membership of the AGE, gender balance, geographical distribution and user representation was paid attention to.

After a productive discussion at the meeting, the AGE members acknowledged the importance of this initiative, saying that “As Government, we are very lucky that in this process of digitalization the CSOs are on our side so that we can help citizens together. We think of CSOs as our partners, they are of tremendous help to us in bringing the Digital Agenda closer to the citizens, because they offer us different perspectives on these matters. By means of dialogues, networking, capacity building, partnering and education, this project is a fantastic tool in achieving just that – raising awareness among citizens, and promotion, shaping and implementation of the Digital Agenda.” – Ms. Elena Manceva, State Secretary at Ministry of Information Society and Administration (North Macedonia), also elected as the Chair of the Advisory Group of Experts.

Filip Stojanovski from Metamorphosis Foundation explained how the Digital Agenda is viewed by them as part of everyday life, and how it is important for CSOs and Governments to address these issues. Filip highlighted for example how it is obligatory for people to register to get the vaccine. Experience shows that some people do not possess the digital skills necessary for this process. Thus, the aim of the ICEDA is to increase such skills and increase accessibility to e-services. “ICEDA is saving lives”, Filip Stojanovski emphasized.

Slobodan Markovic from UNDP Serbia mentioned how it is extremely important to engage CSOs in the e-governance process because: 1) Government services that are introduced that are not user-focused, instead they are designed to address only their administrative process, and it is important for CSOs to advocate for the citizens; 2) Transparency: Governments should make information available regarding how the algorithms work, what is being done with the data etc. He further highlighted that governments need an external push and organizations who check their processes. He also shared that cybersecurity is a point to be tackled by the governments, and ICEDA can work to help these institutions build their cybersecurity practices in this process.

Mila Josifovska Danilovska from Metamorphosis Foundation highlighted that there is a lack of databases of the number of users across e-services, which she mentioned are very important for, among other things, the development of other e-tools and policies. Knowing the number of users of e-services, governments together with other stakeholders can see where there may be a problem and inspect the low usage of a certain service, in order to make it more user-friendly, bring it closer to citizens, and in general, adapting it to the citizen needs as well as creating new e-services for citizens based on the lessons learned. On this, Snezana Nikcevic from 35 MM posed a question on how to address the increasing of the percentage of users of e-services. To this, the suggestions were to derive from lessons learned from other countries who have undergone this process, in addition to promotional campaigns to engage the citizens much more, as well as consulting with the institutions to see which e-services are their priority and work from there.

Blerta Thaci, Steering Committee Member, emphasized one experience of Open Data Kosovo in collaborating with the Agency responsible for the development of the new e-Kosova platform, for which the Agency had certain misconceptions. She shared that by gathering the e-services from all institutions in Kosovo, the Agency was under the impression that they themselves would be delivering them, to which ODK had to clarify that the processes will remain the same i.e. each Agency will perform their own services, but that citizens will have only one channel to do so, rather than having multiple accounts across different agencies. This led to the conclusion that it is also the question of the understanding and awareness of the institutions themselves on the whole concept of digitalization and centralized e-service platforms, which further can be addressed by ICEDA.

The meeting ended with a short summary of the meeting highlighting the main conclusions and need for future steps, among which: