On 22 January 2021 (Friday) starting at 10:00 am, within the project “Increasing civic engagement in the digital agenda – ICEDA”, Metamorphosis Foundation in partnership with Levizja MJAFT (Albania), Open Data Kosovo (Kosovo), NGO 35 MM (Montenegro) and CRTA – Center for Research, Transparency and Accountability (Serbia), held a regional online event “Regional Dialogues for the Digital Agenda”. The event was accompanied by live streaming on Facebook and the video can be found here. The event was attended by 175 representatives of the civil society, institutions, media and citizens of the Western Balkans, and it consisted of a short presentation of the regional survey Digital Agenda Observatory: Baseline research of the state of e-government development & digital literacy in the targeted Western Balkan countries 2020, followed by a discussion on improving the state of e-government development and digital literacy in the target countries of the Western Balkans.

Bardhyl Jashari – Executive Director of the Metamorphosis Foundation, gave an introductory speech, emphasizing that digital transformation and the Internet contribute to economic development and innovation globally, regionally and locally, but that in reality, and this is confirmed by IECDA research, that not all citizens from all walks of life are aware of or feel the benefits of digital transformation, which should ultimately provide an improvement in their lifestyle.

The introductory speech was followed by a short presentation of the regional survey “Digital Agenda Observatory: Baseline research of the state of e-government development & digital literacy in the targeted Western Balkan countries 2020” by Miša Bojovič – – Senior Researcher at CRTA. The research is part of the Digital Agenda Observatory, which is a tool with a special methodology through which the implementation of the Digital Agenda in the Western Balkans in Albania, Kosovo, Serbia, North Macedonia and Montenegro will be monitored during the project. The aim of the research is to provide a regional perspective and a starting point for further measurement of progress in these areas in relation to the Digital Agenda, as well as to provide additional recommendations for improvement.

“Digitalisation does not take up much of the administrative change. Governments need to set up portals that offer e-services in one place. The most efficient implementation of e-services is for the business sector, but even more effort is needed. Also, there is no end to some of them, because at one point the citizen is sent to the counter, i.e. in a traditional way of collecting data,” said Bojovič.

In short, the key research findings are listed below:

In accordance with the findings of the research, the roadmap was presented, i.e. a list of 18 recommendations for improvement in the priority areas that jointly provide a roadmap for advancing the Digital Agenda in the region that are available in the research.

After the presentation of the research, a discussion started for improving the development of e-government and digital literacy in the target countries of the Western Balkans, which was attended by representatives of institutions and civil society organizations from the Western Balkans. Among the representatives of the institutions were Romina Kostani – Director of the Directorate of Innovation and IPA e-Government (Albania), Fjola Restelica – project KODE in the Ministry of Economy and Environment (Kosovo), Bojana Bajic – General Director of the Department of Digitalization and Information systems in the Ministry of Finance (Montenegro), Solza Kovacevska – State Adviser in the Ministry of Information Society and Administration (North Macedonia) and Žarko Dakic – IT Advisor, member of the Council of the City of Pancevo (Serbia). The civil society organizations that participated in the discussion are members of the ICEDA network, i.e. Aldo Merkoci – project coordinator in Levizja MJAFT (Albania), Blerina Ramaj – project coordinator in Open Data Kosovo (Kosovo), Snežana Nikicevic – project coordinator in NGO 35 MM (Montenegro) and Filip Milenkovic – project coordinator at CRTA (Serbia). 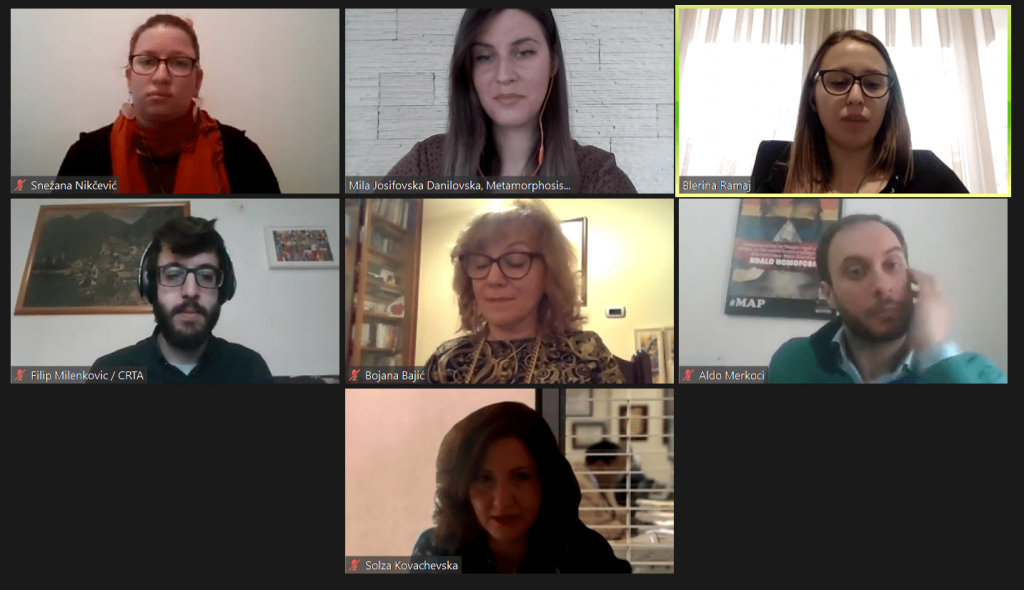 The conclusions of the discussion largely coincided with the conclusions and recommendations of the regional research. Namely, the purpose of digitalization is to simplify the processes and improve the life of the citizens, and the covid-19 pandemic further emphasized the importance and the need for digitalization of the institutional services, their simplification, as well as literacy of the citizens for online use of those services, instead of the traditional waiting at the counters. Of course, we must be aware that when introducing innovations and digital solutions, it is necessary to ensure their sustainability and security, as well as their solution through a systemic approach. Furthermore, it is necessary for the institutions from the region to put all e-services in one place and to make them completely digital, from the moment of application to the moment of receiving the service. Raising the collective awareness of the benefits of digitalization of the entire population was also one of the general conclusions, which presents a challenge for the coming period.

The research in can be read in Macedonian, Albanian and English.

The project is implemented by the Metamorphosis Foundation (North Macedonia), the Academy of e-Governance (Estonia), Levizja Mjaft! (Albania), CRTA – Center for Research, Transparency and Accountability (Serbia), NGO 35mm (Montenegro) and ODK – Open Data Kosovo (Kosovo). The project is being implemented with financial support from the European Union. 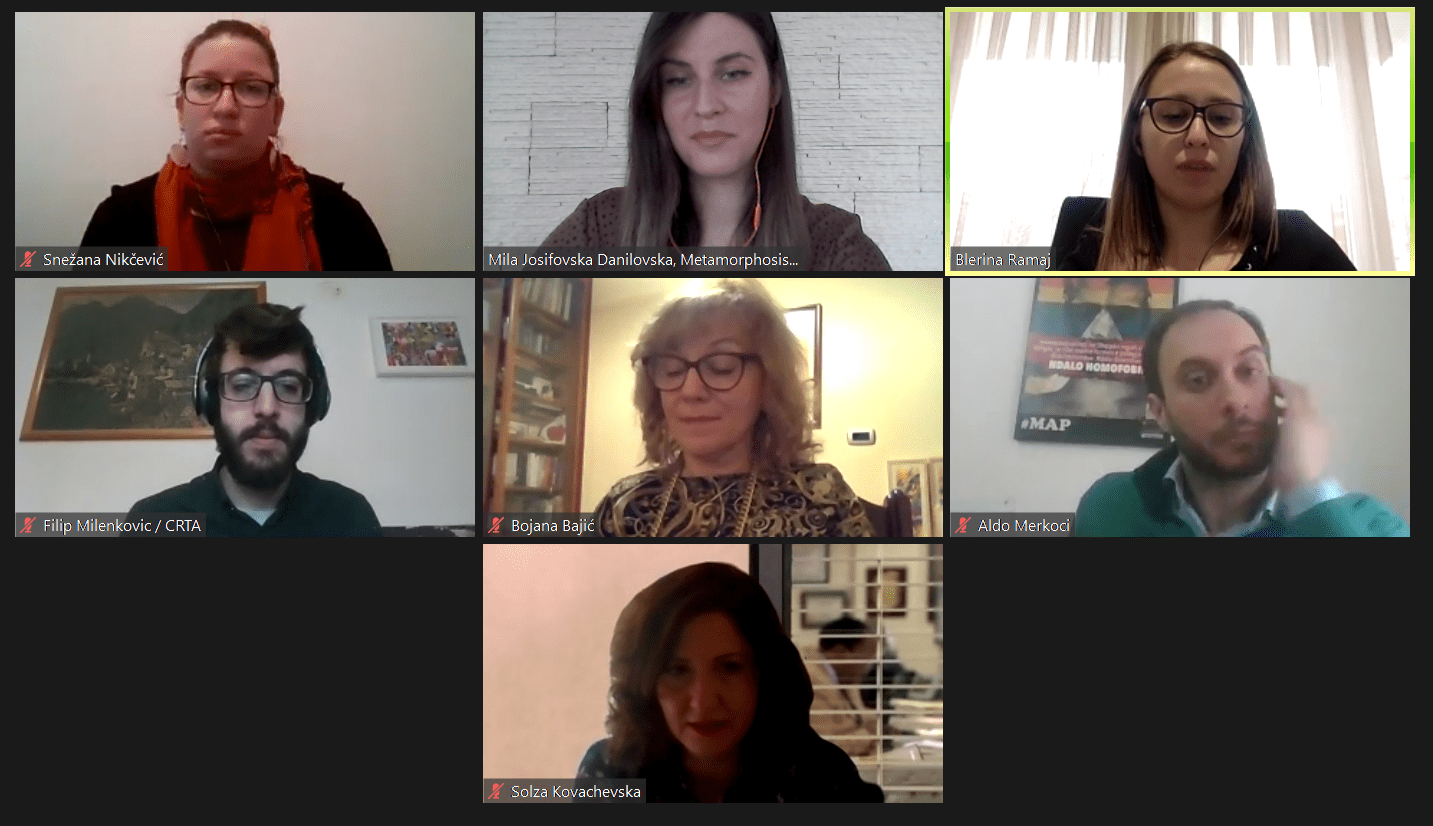 Marriage Certificate. Photo: Portalb.mk The citizens of our country face everyday problems of different nature when it comes to obtaining documents. The public administration does not always function properly and this is best…

ICEDA Training for sub-grantees and members of the ICEDA network